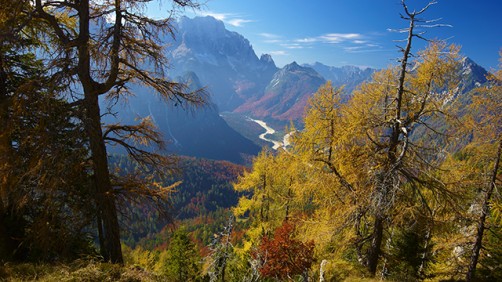 Newswise — MORGANTOWN, W.Va.—The world’s forests constitute the most varied and diverse terrestrial ecosystems on the planet, and are home to thousands of species of plants, animals and micro-organisms.

A new study coordinated and co-authored by West Virginia University researchers says that conserving these diverse forests not only retains a species-rich environment, but also maintains the forests’ output and services for future generations.

The study, which will be published in Science tomorrow (October 14), reveals that biodiversity – the variety of living things on Earth – in forests promotes productivity. In other words, when the number of tree species increases, so does the amount of timber that can be harvested. They also found the opposite to be true – a decline in biodiversity would result in an accelerating decline in forest productivity.

The study was operated under the Global Forest Biodiversity Initiative by Jingjing Liang, lead author and assistant professor of forest ecology in the Davis College of Agriculture, Natural Resources and Design at WVU; Peter B. Reich, professor and F.B. Hubachek senior chair in forest ecology at the University of Minnesota and tree physiology resident fellow at the Institute on the Environment; and Thomas W. Crowther, Marie Curie fellow at the Netherlands Institute of Ecology.

Inventory on a global scaleThe research team worked on an impressive scale, collecting massive amounts of data from around the world.

“We are very fortunate to have worked with so many dedicated foresters and researchers on this study,” said Liang. “This team by itself shows that diversity can bring forth great productivity in scientific collaboration.”

Scientists from 90 institutions consolidated field-based data forming one of the largest global forest inventory databases in the history of forestry research.

Tens of thousands of forestry professionals collected the underpinning data, which extended over a period of 150 years.

In total, data was collected from more than 770,000 plots consisting of more than 30 million trees across more than 8,700 species.

The study took into account all major global forest ecosystems across 44 countries and territories. It included some of the most distinct forest conditions on Earth, such as the northernmost in Siberia; the southernmost in Patagonia; the coldest in Oimyakon, Russia; the warmest in Palau, an archipelago in the western Pacific Ocean; and the most diverse in Bahia, Brazil.

As forests go, so goes the economyAfter analyzing the data, researchers determined that loss of tree species richness – through deforestation, forest degradation and climate change – would cause a decline in forest productivity worldwide. The underpinning ecological mechanisms are complicated, but most recent theories attribute the phenomenon to improved resource utilization as plant diversity increases.

This means that as diversity decreases, so does the tree yield – the amount that can be harvested – whether it be timber or another forest characteristic.

Researchers estimated that with a decline in tree species richness from the current level to one species, commercial forest productivity across the world would also decline up to 66 percent, even if other things including the total number of trees remained the same.

Researchers calculated that the amount of loss in productivity that is associated with the loss of tree species richness would have an economic value of up to a $500 billion per year across the world.

That amounts to more than double what it would cost to implement effective conservation for all of Earth’s ecosystems on a global scale.

“The strongest economic message of this study is that the economic benefit of forest species diversity far exceeds the cost of preserving it, even when we only consider its role in maintaining the global commercial productivity of forests,” said Zhou.

“According to this research, the ongoing species loss in global forests could substantially reduce forest productivity, thereby reducing the absorption of carbon dioxide by forests from the atmosphere,” said Lee. “Therefore, conserving forest biodiversity should be one of the important actions on what we can do about climate change.”

Additionally, the relationship between conservation and poverty is becoming more important, particularly in rural areas where jobs and livelihoods are dependent on forests. The loss of species in these areas, and the diminishing forest productivity that goes along with it, could exacerbate local poverty.

The research findings demonstrate the importance of preserving species diversity and the need to reevaluate forest management strategies and conservation priorities globally.

“It is important to remember that this economic evaluation does not take into account the many other ecosystem services provided by forests, so the total value of diversity is likely to be many times higher than this,” said Crowther. “In particular, biodiversity will also promote the uptake of huge amounts of carbon by trees, and will, therefore, be critical in the fight against global climate change.”

Ultimately, the researchers want to increase understanding of the intrinsic link between human and nature, generating insights into the potential benefits of integrating and promoting conservation in forest resource management and forestry practices.