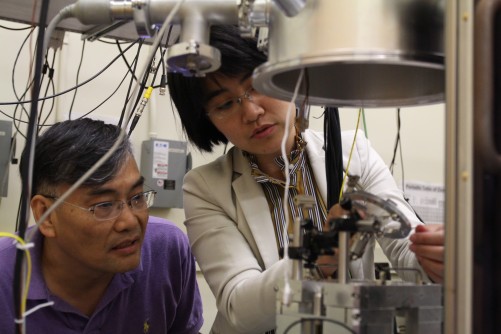 In collaboration with fellow WVU condensed matter experiment expert Cheng Cen, they are breaking the rules of classical physics in search of a solution to making computers faster than ever.

“The majority of information today is carried by electronic signal. While those voltages or currents are fine for now, we want to think about what we want technology to be doing not just next year but 10 to 20 years from now,” said Cen, an assistant professor in the Department of Physics and Astronomy. “In the future, we won’t be happy with the current performances of computers and cell phones. We want to push for unthinkable speeds – what will come next.”

Funded by a $2 million National Science Foundation Emerging Frontiers in Research and Innovation grant, their research team is just one of nine to receive the prestigious award.

“This research is an organic integration of Cen’s expertise in optical characterization of devices and my expertise in physical properties of materials,” said Li, WVU’s Robert L. Carroll Professor of Physics. “We want to take something wonderful and make it useful.”

Photons, or light particles, can transmit data at a much faster rate than traditional electron-based data transfer methods in computers. Li and Cen’s research will disrupt the conventional design of computers by recruiting photons as the data carriers and making them as “tamed” as the electrons.

The biggest obstacle to this goal is the time-reversal symmetry present in most materials. Fundamentally, having a time-reversal symmetry means that the travel of photons must obey reciprocity. That is, if a photon behaves a certain way moving forward, it should behave in the exact same way when traveling backward.

Over the next four years, Li and Cen, working with University of Wisconsin-Milwaukee theorists Michael Weinert and George Hanson, will conduct experiments to find the best approach to breaking this reciprocity and time-reversal symmetry in transition metal dichalcogenide monolayers, which are atomically thin semiconductors, to better control and manipulate light in information processing devices.

The team also plans to conduct community education and outreach through programs like Research Experience for Teachers, Science on Tap public lectures and Broaden the Horizon, a STEM education program for middle school girls.