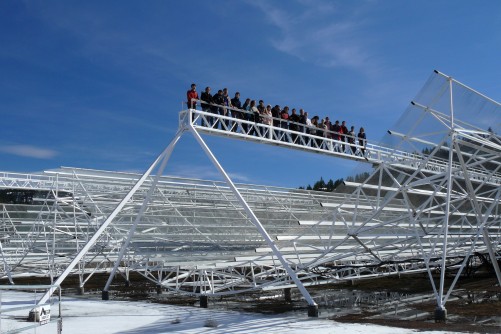 Team members gather on one of the four cylindrical reflectors that make up the CHIME telescope.

Newswise — MORGANTOWN, W.Va.—Since the early 1900s scientists have known that the Universe is expanding but recent studies have shown that the rate of expansion is accelerating. The reason for this is currently unknown; however, Kevin Bandura, an assistant professor in the Lane Department of Computer and Electrical Engineering at West Virginia University, has been working on the Canadian Hydrogen Intensity Mapping Experiment, or CHIME, for the past several years to solve the mystery.

Researchers think that an unknown form of energy, called dark energy, is causing the accelerated expansion but this cannot be confirmed without first understanding the history of the Universe. CHIME is a telescope project that was designed to map that history by studying dark energy and observing hydrogen gas in distant galaxies that were strongly affected by it.

The CHIME telescope, located in the Dominion Radio Astrophysical Observatory in Kaleden, British Columbia, is comprised of four cylindrical reflectors, 256 dual-polarized antennas for data collection and an F-Engine and X-Engine for data processing. Bandura played a key role in developing the device’s F-Engine, which digitally processes signals from space into frequencies that can then be processed into digital maps of the Universe.

According to Bandura, the instrument generates the maps by measuring the radius of spherical shells of matter called Baryon Acoustic Oscillations that developed nearly 400,000 years after the Big Bang.

“The characteristic size of BAO matter developed solely due to the expansion of the Universe over the past 13 billion years,” Bandura explained. “Therefore it can provide a standard ruler that can be used to measure the Universe’s expansion rate.”

The BAO scale has been measured before using individual galaxy surveys to map the distribution of matter. CHIME, however, will map that distribution through radio emissions of neutral hydrogen at a resolution much lower than that of individual galaxies but high enough to still measure the BAO scale. This technique, known as hydrogen intensity mapping, will create a digital map of the Universe larger than anything previously observed and will produce results at a much faster rate.

“We are aiming to establish a core understanding of the makeup of our Universe, a concept that has remained completely foreign to us,” said Bandura. “The results collected by the CHIME telescope will help us understand the fundamentals of our Universe once and for all.”

The telescope, which was set to begin collecting data Sept. 7, will receive radio waves around the clock to create a continuous 3-D map of the Universe. But that’s not all; it will also pick up short explosions of energy, called fast radio burst, that last only a few milliseconds and have an unknown origin.

Since fast radio burst were first reported in 2007 by Duncan Lorimer, an astronomy professor at WVU, less than 25 have been recorded. The CHIME telescope is estimated to capture many instances per day.

“Although the CHIME project began before fast radio bursts were even understood it turned out to be a good tool for capturing and measuring them,” Bandura said. “We have the opportunity to be the first to understand what they are.”

CHIME will also record pulsars, which are small remnants of giant stars that have gone supernova. Once this occurs they leave behind rapidly spinning cores that emit radio energy that can be recorded and used to detect gravitational waves rippling through the galaxy.

It will take several years before data can be analyzed related to dark energy; however, fast radio burst and pulsar data could be available within as little as one year.

“There is so much we still do not understand about the Universe,” Bandura said. “CHIME will be critical in helping us understand how it’s expanding and will help us discover things we didn’t even know we were looking for yet.”

Bandura will continue to serve as a critical member of the project and participate in analysis of the collected data as it becomes available.