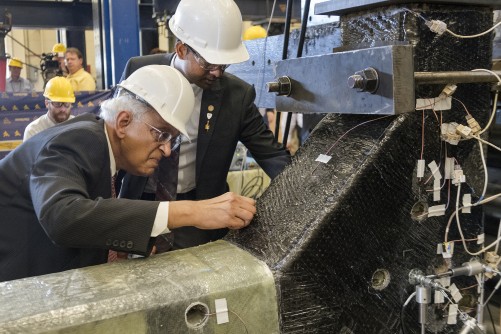 Newswise — MORGANTOWN, W.Va - Fear of the “Big One,” a magnitude 8.0 or greater earthquake, has been fodder for cinema and amusement park rides for decades, but the reality could be devastating for communities who are unprepared for that rare rupture or even weaker, but more common, lower-magnitude tremors.

West Virginia University professor Hota GangaRao and Praveen Majjigapu, a Ph.D. student in civil engineering, have developed a system that will increase the strength and endurance of structures in earthquakes, hurricanes, tornadoes and other large blasts, helping communities prevent catastrophe. The system is also beneficial for repairing historic or aging structures.

The three-piece system consisting of filler modules – wedge-like parts made to certain specifications – reinforcing dowels and composite materials allows buildings and bridges to resist heavier loads, and provides a significant amount of shock absorption as well as moisture and fire resistance.

“With this system, even if a joint cracks under excessive loads it won’t immediately collapse,” said GangaRao, who is the Maurice A. and Joann Wadsworth Distinguished Professor of Civil and Environmental Engineering and director of the Constructed Facilities Center in the Statler College of Engineering and Mineral Resources. “By minimizing failures of structures, we can increase the safety and security of communities, prevent costly damage and save lives.”

Additionally, outfitting a building with the system is much more cost-effective and requires less time than traditional methods of retrofitting and yields better results.

“Rehabilitation of old buildings is expensive and labor intensive,” said GangaRao, who is also the director of the Center for Integration of Composites into Infrastructure. “An affordable solution will allow more buildings to be strengthened.”

The complexity of simplicity

At first glance, a wedge nestled into a joint seems like an easy solution – almost too easy.

“The beauty of the system is its simplicity,” GangaRao said.

But he is quick to point out that there is a substantial scientific method behind the patented system’s design.

In a cavernous lab, GangaRao works with Majjigapu and other team members to fabricate joints that can be tested under extremely heavy loads.

One test consists of two concrete members, a column and a cantilever, which are connected to form a sideways “T.” Then wedges are bonded to the two 90-degree angles on either side of the joint.

The system can work with structures made of various materials, such as concrete, timber and composites. The wedges can also be made of different advanced materials depending on their application.

Aside from material, one of the most important characteristics of the wedge is its shape, which is meant to eliminate high-stress zones in the joint and depends on factors such as load, material and the configuration of the joint.

“In an optimal system, the wedge will have some sort of curve,” GangaRao said. “But it requires a lot of mathematical computation behind the scenes.”

After the wedges are bonded to the joint, team members install steel bars through the wedges and into the concrete to reinforce and lock the pieces into place.

Next the team cuts multiple sheets of composite material – fabric made of carbon or glass fibers bonded with a polymer resin – into a series of puzzle pieces that are wrapped around the concrete, adhered with additional resin and left to cure.

Composite materials are noncorrosive, more durable and cheaper to install than more traditional methods, making them ideal for not only the construction of new structures, but also for the repair of aging structures.

Once the composite has hardened, the totality of dissimilar materials is bonded together and work as a single unit, stronger and more durable.

GangaRao’s lab is full of impressive structures, and he hopes all of them will fail.

The basic idea is that concrete is not very good at holding tension, so when there is a lot of it the structure will not be as strong.

Think of a diving board, which is only supported on one end. When you stand on the edge over the water the board bends under your weight. If there is too much weight, the board or the joint – or both – could break.

Without the three-part system, GangaRao’s lab tests have shown failure under a 7-ton load. With the system, the team has been able to apply five to seven times that amount – nearly 50 tons – before failure.

The need for support

Engineers and scientists have developed ways to manage the stress put on aging buildings and bridges as well as those in seismic areas. Over the years, building regulations have tightened as earthquake- and hurricane-prone cities try to minimize fatalities, property damage and insurance claims.

Despite those efforts there are still thousands of structures that lack the appropriate levels of protection necessary to withstand blast-level loads.

“There is a significant need for this type of repair and retrofit around the world,” Majjigapu said.

For example, in 2010 a 7.0 earthquake in Haiti resulted in the deaths of 100,000 people, many of whom could not escape buildings before they collapsed. Countries such as India and Nepal are in seismic zones with old buildings, monuments and transportation infrastructure that may not withstand a high-magnitude quake.

In the United States, The Los Angeles Times recently reported that Santa Monica is hoping to pass the “nation’s most extensive earthquake retrofit plan” to nearly 2,000 vulnerable buildings.

In addition, the American Society of Civil Engineers Infrastructure Report Card gave the nation’s roads and bridges a D+ as the physical condition and performance of decades-old structures continues to deteriorate.

Plans for the future

GangaRao will continue lab testing, but plans to begin field testing on towers, lattice structures and hydrostructures to record repeated performance of the retrofit in real-world applications.

Ultimately, he knows that the success of the system will rely on cooperation with industry, practicing engineers, construction companies, agencies, departments of transportation, cities, states and countries.

His goal is to provide maximum strength and endurance at very low cost, while also making it quick and easy to outfit buildings and bridges with a new system.

“We have to show people what we are doing at WVU, so they can see the broad range of applications that are possible in addition to the savings in time and cost,” GangaRao said.

An online media kit containing downloadable videos, photos and other resources is available at http://wvutoday.wvu.edu/media-center-blog/2017/05/17/media-kit-hota-gangarao