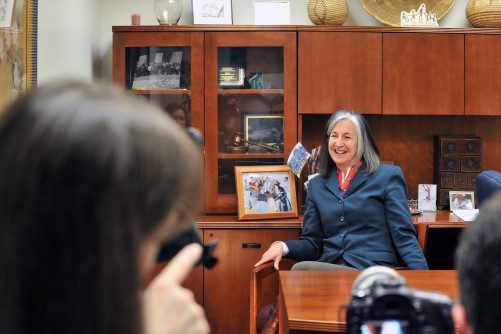 Newswise — MORGANTOWN, W.Va.—“Have you ever been to camp?” asked Ann Chester, assistant vice president for education partnerships at the West Virginia University Health Sciences Center. “Camps are magical for building relationships. Over time, you can use those magical relationships for good.”

The National Institute of General Medical Sciences, a division of the National Institutes of Health, has awarded Chester $270,000 for one year to help high-schoolers forge those “magical relationships” and consider a career in science, technology, engineering or math.

The award is part of a five-year, $1.25 million grant to hold symposia and Biomedical Summer Institute camps at WVU, Marshall University, West Virginia State University and Glenville State College. The events are designed for high school students who participate in the West Virginia Health Sciences and Technology Academy, or HSTA, a program that seeks to increase the number of African American, financially disadvantaged or other underrepresented West Virginians who pursue health-sciences or STEM-based college degrees.

As part of the project, 120 high-school juniors from 26 counties across West Virginia will attend a Biomedical Summer Institute camp at the WVU Health Sciences Center next year. There, they will learn about early-childhood obesity, healthy diets and best practices in physical activity. They will also devise their own research project related to childhood obesity and its prevention. Come fall, they will carry out their projects in local after-school programs for pre-kindergarteners.

Their teachers will attend their own Biomedical Summer Institute earlier in the summer to discuss with WVU researchers—and with each other—the nutritional and physical-activity tenets that underlie Key 2 a Healthy Start, a statewide program that equips childcare providers to foster healthy habits in the children they watch over.

The high school students will pose their own research questions, form their own hypotheses, design and execute their own experiments, and draw their own conclusions based on the results. Within guidelines, they can measure what they are interested in, tracking values such as the pre-kindergarteners’ activity level, water consumption and acceptance of vegetables.

“If they’re interested in looking at the change in preschoolers’ attitudes toward vegetables after they’ve been handed smoothies they can do that,” said Chester, who leads WVU’s involvement with HSTA.

The students then pass on their experimental data to WVU researchers, who use them as the basis for broader scientific inquiries into nutrition, obesity and metabolic diseases.

“It is two-way learning because it gives professors input on rural communities from students and teachers across the state,” said Chester.

The data students collect—often in rural, low-socioeconomic areas—isn’t easily obtained. Chester once saw a map of West Virginia that illustrated where all of the HSTA students had gathered survey data during one Biomedical Summer Institute.

“That map had hundreds and hundreds of dots on it, where we had all kinds of information on people from the underserved populations around West Virginia,” she said. “That data’s hard to get, and it told a tale of deeper disparities than published.”

Not only do the summer camps familiarize students with the scientific method and make it easier to glean rare data from the field, but HSTA as a whole improves high school students’ eventual success in college.

Nearly 90 percent of students who complete the HSTA program receive at least a four-year college degree, surpassing the national average of 25 to 30 percent in comparable demographics. Additionally, HSTA participants are three times as likely as their non-HSTA peers in the state to choose a health sciences or STEM major, and 85 percent of HSTA graduates stay in West Virginia to work.

But HSTA students don’t have to wait until they graduate college to help West Virginia.

“This is citizen science. Kids are actually going out and collecting data with scientists,” said Chester. “The students are using the data for their projects; the scientists are using all of the kids’ data for their own work, and they are using the HSTA students as their vectors for change in the pre-K area for all of the various ways that kids can help kids change their lifestyle. This grant is capitalizing on the ability of children to make a difference in their home community if they are given the tools and the power to do it.

Research discussed in this publication is supported by a Science Education Partnership Award, a National Institutes of Health program.

Check http://wvutoday.wvu.edu/ daily for the latest news from the University.