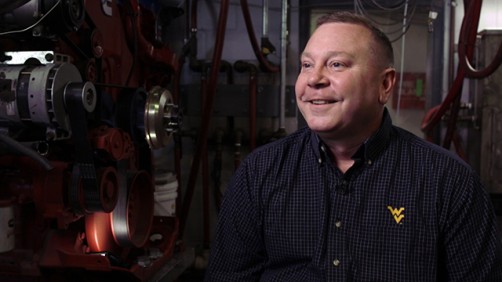 (Editors note: An online media kit with high-resolution photos and video, biographical information and other background information is available.)

Newswise — West Virginia University engineer Dan Carder, who led the research team that broke open the Volkswagen emissions scandal, has been named to the 2016 Time 100, the magazine’s annual list of the 100 most influential people in the world.

“It’s overwhelming to look at the list,” says Carder, director of WVU’s Center for Alternative Fuels, Engines and Emissions. “I’m so honored to be included with such influential and prominent people, but even though it’s my name in print I believe this is truly CAFEE’s honor, the department of mechanical and aerospace engineering’s honor and West Virginia University’s honor.”

Carder was one of a handful of engineers and scientists cited among the list of activists, innovators, world leaders, athletes and celebrities. He was included in the list of 23 “pioneers.” In the feature about Carder, the consumer advocate and attorney Ralph Nader wrote, “As we enter a new era of pro-consumer testing, we can thank Dan Carder for reporting the facts that show the way.”

President Gordon Gee says this has been an historic week for WVU and the state of West Virginia, as the University also celebrates alumna Margie Mason’s Pulitzer Prize Gold Medal for Public Service.

“It is tremendous to see West Virginia University make an impact on the world stage,” Gee says. “Dan Carder and the rest of the team at the Center for Alternative Fuels, Engines and Emissions are recognized internationally for leading the way in emissions research, and their work will bring sweeping changes in the global automotive industry. They are the embodiment of the Mountaineer spirit – unafraid to challenge the status quo, bold enough to face the unknown and determined enough to change the world.”

Carder and a team of researchers at CAFEE were the first to test emissions from U.S. diesel vehicles while on the road. They found elevated levels of oxides of nitrogen, or NOx, from Volkswagen diesel vehicles during on-road tests after comparing on-road emissions levels to levels in a lab setting.

Carder and the CAFEE team became media fixtures last fall after news broke that the U.S. Environmental Protection Agency had charged Volkswagen with violating the Clean Air Act and the automaker admitted to installing a “defeat device,” software code that altered the performance of the emissions system, on their vehicles.

In the months since the the Volkswagen’s public admission, the company’s CEO stepped down, its sales have declined and it faces large fines from the EPA. A deal with the U.S. government is expected to be announced soon and could provide a framework in which Volkswagen would buy back 500,000 vehicles, fix vehicles and form a compensation fund for car owners. The EPA has stated that it will overhaul the way it tests diesel emissions in the future.

A Parkersburg native and WVU mechanical and aerospace engineering alumnus, Carder says he has known that he wanted to be an engineer for most of his life. He has been a fan of cars – especially Ford – for as long as he can remember. As a child he was always curious about how things worked. At a childhood birthday party, he received a bicycle as a gift and disassembled it before the party had ended.

Decades later Carder is taking apart five-ton engines and leading a team of faculty, engineers, technicians and students to make discoveries and advance technology that will improve efficiency and reduce emissions.

Among other accolades, Carder and Arvind Thiruvengadam, assistant professor of mechanical engineering, were named Automotive News All Stars in December, and the CAFEE research team was named Disruptors of the Year at the inaugural CNET Roadshow Shift awards in January.

Time’s editor Nancy Gibbs has said of the roster of influencers in the past, ”The Time 100 is a list of the world’s most influential men and women, not its most powerful, though those are not mutually exclusive terms. While power is certain, influence is subtle. As much as this exercise chronicles the achievements of the past year, we also focus on figures whose influence is likely to grow, so we can look around the corner to see what is coming.”

The full 2016 Time 100 list and related tributes appear in the May 2 issue of the magazine, which is available on newsstands on April 22, and online today (April 21) at http://time.com/time100.