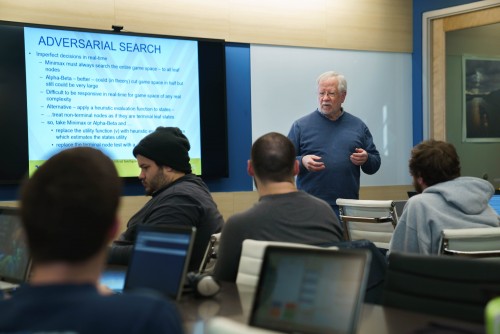 The WVU Reed College of Media, in collaboration with computer science students and faculty at the WVU Benjamin M. Statler College of Engineering and Mineral Resources, is hosting an artificial intelligence (AI) course at its Media Innovation Center that includes two projects focused on using AI to detect and combat fake news articles.

Students in the senior-level computer science elective course are working in teams to develop and implement their own AI programs under the instruction of Don McLaughlin, research associate and retired faculty member of the Lane Department of Computer Science and Electrical Engineering.

Stephen Woerner, a computer science senior, is on one of the teams charged with creating a system that detects fake news articles. His team’s approach utilizes a machine learning system to analyze text and generate a score that represents each article’s likeliness that it is fake news. Woerner added that this score is accompanied by a breakdown that explains the rating and provides transparency.

“Artificial intelligence can have all the same information as people, but it can address the volume of news and decipher validity without getting tired,” Woerner said. “People tend to get political or emotional, but AI doesn’t. It just addresses the problem it’s trained to combat.”

This collaboration with the computer science course serves as an example of the Media Innovation Center’s mission to support initiatives, projects, research and curriculum innovations that intersect its work in technology, media and information networks.

McLaughlin says working at the Center has helped his students this semester, as it suggests a more creative atmosphere than classrooms he’s used in the past.

“I’ve taught this course before, but the students seem to be more enthused this time. We appreciate the space and the breakout areas available for team collaboration here at the Center,” said McLaughlin. “Those amenities are valuable in a university environment.”

Each team will demonstrate their completed AI project during the last week of classes at the Media Innovation Center located in the Evansdale Crossing building.