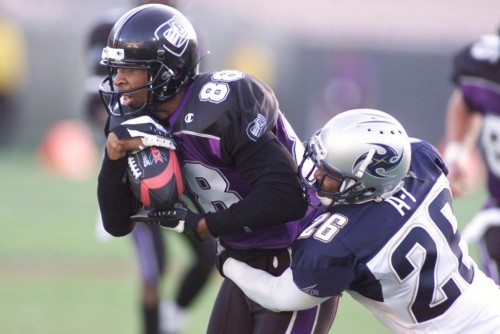 Junior Lord #88 of the Chicago Enforcers fights off the tackle of Dell McGee #26 of the Los Angeles Xtreme at Memorial Coliseum in Los Angeles, California

As plans unfold to launch XFL 2.0 next month, Texas A&M University marketing and accounting experts in Mays Business School say the upstart football league could have a better shot for long-term success in its revival, but remain cautiously optimistic.

“A resurgent XFL is an opportunistic attempt to cash in on NFL's woes, but could still come second to the NFL,” Mays marketing professor and Center for Retailing Studies Director for Research Venkatesh Shankar said. “With its WWE roots and proposed plans, he cautioned, “it should hope that it is not perceived as ex-NFLers on steroids.”

Shankar’s areas of specialization include digital business, marketing strategy, innovation, retailing, international marketing, and pricing. He is also director of research for the Center for Retailing Studies.

Cashing in on USFL, AFL nostalgia

Accounting professor and sports business and ethics expert Mike Shaub also thinks the XFL could work as a nostalgia play for people who are in the 35- to 49-year-old demographic.

“People who didn’t care at all about wrestling were fascinated at Vince McMahon’s bravado and with having a competitor to the NFL, as they were in earlier times with the USFL and, before that, the American Football League, which eventually had its top teams merge with the NFL,” Shaub said. “They are also tired of what has become known as the “No Fun League,” and they are weary of the politics and drama in a place they go to escape. This is evidenced by the NFL giving in and allowing choreographed celebrations after touchdowns.”

Shaub said that from a financial standpoint, a league like the XFL is far more supportable in 2020 than it was in 2001 because a broad spectrum of revenue sources exist thanks to online retail and streaming technology.

“Actual attendance may not be as critical as in 2001, but playing in small enough locations can give an impression that there is a strong fan base, as in the Arena Football League, but online sales have exploded and online promotion could be relentless at a manageable cost,” Shaub said. “You don’t need jerseys at JC Penney (as in 2001) or even at Academy Sports and Outdoors. You just need to reach your fan base online. Some underdog apparel company like Under Armour will likely arise to spearhead the efforts, unless one of the big apparel companies jumps in first.”

Shaub added that viewership can potentially develop through a number of outlets thanks to streaming and an expansion in the number of cable platforms.

“Extremely cheap subscriptions or a shoestring budget cable channel may be enough to encourage viewership without having to use one of the major networks,” Shaub said. “TruTV broadcasting NCAA tournament games is one example that has evolved in recent years. And social media will have an impact through extensive promotion and, perhaps, as a viewing outlet.”

Shaub is an accounting professor who thinks and writes at the intersection of business, ethics, and sports. He teaches Accounting Ethics and Auditing at Mays Business School and runs the five-year Accounting program, the Professional Program in Accounting.