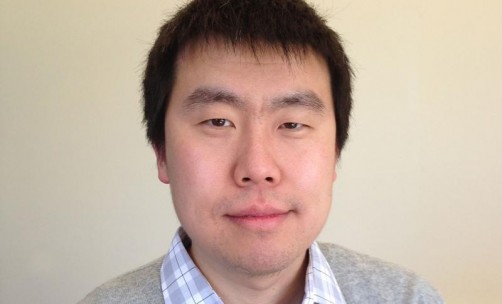 “Xing’s research offers broad promise in drug delivery, bio-imaging, as a platform for research, and for other therapeutics and diagnostics,” said Laurie Leshin, dean of the School of Science. “We are thrilled he is joining the School of Science, and we welcome him to Rensselaer.”

DNA (deoxyribonucleic acid) and RNA (ribonucleic acid) are familiar to us as the molecules that encode and transcribe the genetic instructions for building and sustaining all living organisms. Both DNA and RNA are composed of simple units called nucleotides that function as modular units, strung together in a genetic code much as dots and dashes are strung together in Morse code. Wang’s research seeks to repurpose the modular nucleotides as building blocks for self-assembled nanoscale (one billionth of meter) structures and machinery.

“DNA and RNA have a lot of advantages as bio-nanotechnology materials,” said Wang. Among the advantages, DNA and RNA are bio-compatible, they can be readily synthesized or cloned, the rules that govern the interactions between nucleotides are highly predictable, and chemical properties of nucleotides are easily modified using current lab techniques.

In previous research, Wang investigated programming sequences of DNA strands that can self-assemble into two- or three-dimensional structures.

“You can draw something on paper, a two- or three-dimensional structure, and then you can program sequences of DNA strands that will form your design,” said Wang. “Currently, this design process can even be assisted by semi-automated computer programs.”

Self-assembled DNA nanostructure can serve as a prototyping “breadboard” to study the interactions of elements – such as proteins, drugs, nanoparticles, or semiconducting “quantum dots” – attached to the platform. A similar platform might serve as a sort of circuit board for nanoparticles aligned to form an electrical device. DNA might also be used in a drug delivery system, designed to enclose and protect a drug as it travels in the body, and bind to molecular receptors found only on the drug target.

Wang also researches RNA, which uses a slightly different set of nucleotides. Interactions among RNA chains are more complex than those among DNA chains.

“The connection between my DNA and RNA research is that both involve programming nucleic acid sequences,” Wang said. “Eventually, what I want to do is to borrow the concepts or ideas of making artificial DNA nanostructures and transplant those ideas to RNA based molecular engineering.” To learn more about the novel functions of RNA (especially in living organisms), Wang is researching RNA mediated genome fusion – a phenomenon observed in certain human cancers whereby two ordinarily isolated genomes fuse in some of the tumor tissues. Wang studies genome fusion using a single-celled organism called Oxytricha trifallax. He delivers synthetic RNA molecules into the organism to recreate genome fusion, gaining better understanding and control over the little-known mechanism that causes the phenomena.

“Even though Oxytricha is a single-celled organism, it shares a lot of protein functions and molecular pathways with humans,” said Wang. “They could share the same mechanism for genome fusion, and if that’s the case, understanding the mechanism behind fusion in Oxytricha could help us stop some cancers in humans at a very early stage.”

Wang received a bachelor’s degree in chemistry from Lanzhou University, and a doctoral degree in chemistry from New York University. His research contributes to the School of Science interdisciplinary theme in materials at the nanoscale. He is also a member of Rensselaer Nanotechnology Center and the Center for Biotechnology and Interdisciplinary Studies, where his work is part of a research emphasis on use of biological systems as the basis for new therapeutics.