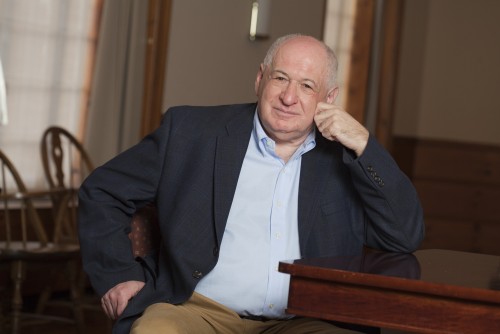 Newswise — A Spanish foundation has awarded a major scientific prize to Yale researcher Joseph Schlessinger and two colleagues in recognition of their work leading to the first personalized treatments for cancer. The 2015 Frontiers of Knowledge Award in Biomedicine from the Madrid-based BBVA Foundation includes a €400,000 cash prize.

Schlessinger, the William H. Prusoff Professor of Pharmacology, shares the prize with Tony Hunter of the Salk Institute and Charles L. Sawyers, M.D., of Memorial Sloan Kettering Cancer Center, for “carving out the path that led to the development of a new class of successful cancer drugs.” The treatments, all of them approved since 2001, target mechanisms specific to various cancer subtypes and carry fewer side effects. The first of this new class of pharmaceuticals, imatinib (marketed as Gleevec), transformed chronic myeloid leukemia from a fatal cancer into one that is nearly always treatable. Dozens of similar targeted drugs are in use for lung and breast tumors, melanoma, and lymphomas.

Schlessinger discovered a mechanism, known as receptor dimerization, that explains how receptor tyrosine kinases are activated when a molecule binds at the cell surface. “We found a mechanism for information flow from outside the cell to the interior of the cell, and how this mechanism was hijacked by cancer,” Schlessinger said. “We explored the way these signaling pathways operated, and it became clear that if we developed inhibitors we could have drugs to treat cancer.” Schlessinger, chair of the Department of Pharmacology, director of the Yale Cancer Biology Institute, and member of Yale Cancer Center, has had an exceptional record of research “that reflects a creative experimental approach, spanning molecular, genetic and structural studies to explore fundamental and important questions in biomedical science,” said Robert J. Alpern, M.D., dean of Yale School of Medicine. “He then translated these discoveries into the development of FDA-approved drugs through companies that he founded, Sugen, Plexxikon and Kolltan.”

Schlessinger noted that while most in the new class of targeted therapies cannot be considered a cure, “they do extend life expectancy, which is a real revolution. These new drugs, moreover, are based on an understanding of what causes cancer. And that is why we can talk about personalized medicine. Even so, we are only scratching at the surface. Cancer is a very complicated disease, and the challenge now is how to overcome resistance.” For the full BBVA Foundation citation, and video from the news conference announcing the prize, visit http://ht.ly/I1EHw.