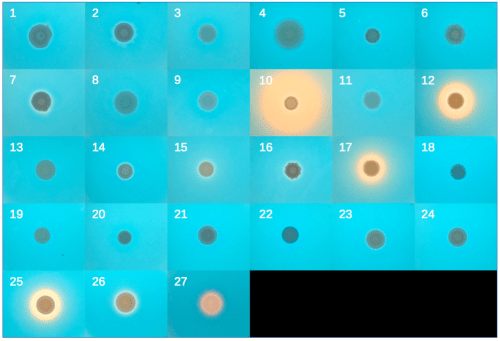 Grown on a dye that turns blue when it binds to iron, yeast that acquired a new ability to scavenge iron from bacteria turn the dye orange as they soak up nearby iron.

Newswise — MADISON, Wis. — An insect’s gut might seem an inhospitable place to settle in, but diverse microbes nonetheless make their home there. Yet in the gut, there’s a struggle for the nutrients needed to survive among the resident bacteria and fungi — not to mention the insect.

So any advantage in scavenging essential minerals like iron provides a boost. Millions of years ago, one yeast cell got just such a boost.

That yeast siphoned up an array of genes from a bacterium. Those genes gave the yeast the ability to make molecules that capture iron for the cell. With that newfound advantage, that single cell eventually diverged into a handful of yeast species, many of which today call insect guts home.

Those genes arrived as a package, seven genes lined up together as a single unit. Common in bacteria, but rare in fungi, these packages of multiple genes that function together are known as operons. This yeast’s vacuuming up of the bacterial iron-scavenging operon is one of the clearest cases yet of the transfer of genes from the bacterial domain to organisms like fungi — the arcing over of one branch on the tree of life to donate genetic material to an altogether separate branch.

University of Wisconsin–Madison Professor of Genetics Chris Todd Hittinger and his lab report this gene transfer in the March 7 issue of the journal Cell and online Feb. 21. The work was led by postdoctoral researcher Jacek Kominek and graduate student Drew Doering, with collaborators across North America, China and the Netherlands.

As part of the Y1000+ Project to sequence the genomes of more than 1,000 yeast species, Kominek and Doering were searching for genes that enable the production of iron-scavenging molecules. Those genes hadn’t been seen in yeasts before.

“Then there’s a bunch of species that seem to have this bacterial pathway. Our first thought was: Is this an error?” says Kominek. “So we started digging deeper. And we found that the genes are located next to each other. They’re involved in the same process. And they originated from bacteria. It was an unexpected thing to find.”

Such genetic transfers from prokaryotic bacteria to eukaryotes like fungi had been seen before but not all that often. They’re known as horizontal gene transfers, because instead of moving vertically across generations, the genes move sideways between unrelated organisms. And some scientists remain skeptical that these gene transfers happen at all within eukaryotes, organisms with nuclei that include plants and animals in addition to fungi.

Spotting seven genes transferred from bacteria to yeast in a single event was exciting for the researchers — it could be a clear case of cross-domain horizontal gene transfer. If so, it was not just a single gene, but many genes conferring a complex new trait. Yet this kind of genomic detritus swapped between cells can, over the course of millions of years, degrade until it no longer functions.

So Doering asked whether the iron-scavenging pathway still worked. He found that, indeed, the genes were still active and capable of producing the end product of the pathway. To test whether the yeast could use the bacterial pathway to scavenge iron, he grew the yeast on petri dishes with a dye that blazes electric blue when iron is around. A handful of the yeast species scavenged enough iron out of their petri dishes to turn the blue dye orange. It was clear that the bacterial pathway retained its function within yeast.

Over the course of evolution, as the yeasts diverged, they made the iron-scavenging operon their own. The yeasts added telltale eukaryotic DNA elements, rejiggered the expression of the seven genes, and even added fungal genes that also participate in scavenging iron in the middle of the operon.

“You have both bacterial and eukaryotic genes cooperating together, working together hand in hand,” says Kominek. “That's pretty remarkable, I think.”

The evidence drove home not only that the gene transfer had happened, but provided a clear-cut case for how the new genes helped the yeast to adapt.

“The idea of eukaryotes participating in horizontal transfer of genetic material is a relatively new thing, and there's still people who are staunchly opposed to it as a phenomenon,” says Doering. “And that's partly because we've been lacking this clear home run case. So I think one of the great things about our paper is it's a nice big billboard in the sand that this occurred, and there's all these different pieces of evidence that support that it's real.”

“I think after two decades of debating whether eukaryotic horizontal gene transfer is real or not, hopefully this provides one of the excuses to finally believe what the data are telling us,” says Hittinger, who is also a member of the Department of Energy-funded Great Lakes Bioenergy Research Center.

“I hope this study is one of the final nails in the coffin,” he says.