6-Feb-2018 9:05 AM EST, by University of Virginia Darden School of Business
favorite_border 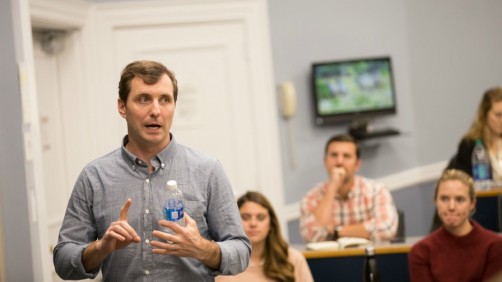 YETI CEO Matt Reintjes (MBA '04) shared lessons learned during his career on brand building and growing companies during a recent talk at the Darden School.

Newswise — After a post-undergraduate stint in consulting, YETI CEO Matt Reintjes (MBA ’04) worked for a tech startup in Austin, Texas, at a time when the industry was fat with venture capital money.

But while the funding was in abundance, the actual business strategy was less clear, and the business fizzled. Determined to learn the ins and outs of business and management, the University of Virginia Darden School of Business was an “easy choice,” Reintjes told members of Darden’s General Management and Operations Club and Marketing Club during a recent visit to Grounds.

A first post-Darden position at Danaher Corp. proved more eventful than expected, as plans to join Danaher’s product identification division were scuttled when the company offered him the chance to instead join a newly acquired business in medical technology, a field Reintjes knew nothing about.

Knowing the first job out of school would set the stage for future opportunities, Reintjes asked Danaher executive and Darden alumnus Phil Knisely (MBA ’78) for guidance.

“Phil said, ‘You can choose the safe, easy job or go into the wild, wild west,’” Reintjes said. “It was an obvious decision and it delivered.”

Reintjes recalled arriving at an aging factory with a parking lot given to frequent flooding. He was the third person hired into the carve-out unit of a public company, given a desk without a chair and little initial guidance.

In addition to a crash course on medical technology, Reintjes said he learned “software and hardware development, brand building, channel marketing and how to grow businesses when you really don’t know what you’re doing.

“It was brutal and painful and tough, and I worked like a dog. And I wouldn’t trade it because I learned an immense amount, and it helped form the opportunities that would come after that,” Reintjes said.

The Danaher dental business grew to $2 billion during Reintjes’ time there, with Danaher frequently acquiring and integrating new companies, an act Reintjes likened to running on a never-ending treadmill. When presented with the offer to move to a recently acquired unit in Helsinki, Reintjes said he made the “painful” decision to get off the treadmill and look for a new opportunity.

Noting that he gave the company four months’ notice to allow for the best possible transition, Reintjes advised that how you leave a company can be as important as how you join one, particularly within an alumni network as connected as Danaher.

“You’ll get to a point in your career where you want to walk out in a blaze of glory,” Reintjes said. “That’s never a good idea. It only feels good in that moment.”

After Danaher, Reintjes was recruited as COO to Bushnell Holdings, a sporting goods-focused consumer products company with 19 brands under management that was in the process of exploring a sale. The company was eventually acquired and spun off into a new, larger publicly listed company named Vista Outdoors, where Reintjes learned the outdoor industry and closed deals to acquire brands like Camelback and a stand-up paddleboard company.

When YETI and its private equity backers came calling, Reintjes said it was instantly apparent that he was being offered a unique opportunity. Then primarily known as the maker of high-end coolers with a cult following among outdoorsmen, Reintjes said it was clear the company’s founders had built a unique niche with room to run.

Weighing the pros and cons of taking the position with his family, Reintjes said he ultimately realized he would never see another such opportunity in his career to help transition a founder-led company with strong momentum and countless areas to grow and mature.

Joining in late 2015, the CEO has since helped usher in a period of explosive growth, with the company moving into new product lines and geographies and becoming an increasingly household name. YETI coolers and tumblers are now a common sight at tailgates and backyard cookouts.

The company has also greatly expanded and enhanced its leadership team for its new growth orientation, and Reintjes says the common thread among the hires is “unique and different experiences prior to YETI.”

Reintjes said the company hires with an emphasis on bringing on thinkers — people with mental agility and a willingness to stretch. There were certain companies Reintjes said he prefers not to hire from, as their corporate cultures and training programs are often so strong they can compromise an ability to think broadly in new contexts.

YETI is “hypersecretive” about what’s coming next for the company, in part to stave off the flood of inevitable knockoffs that follow in its wake. However, Reintjes said “stoking the brand” with new products and sector explorations would continue, as the company walks a tightrope of seeking expansion while not diluting a brand or losing the connectivity its fans.

“We are very careful with our brand and what we do with it,” Reintjes said. “We try to be broad and deep, and we try to have depth in the communities we operate in, but we try not to be everything to everyone.”

The CEO also urged Darden students to not try to be everything to everyone, to have a filter on their career decisions in order to determine what they really want out of a job, as opposed to chasing an upward trajectory for its own sake.

“Make no mistake about it, you’re going to have anxiety about: ‘Am I going far enough, fast enough? Am I on the right track?’” Reintjes said. “You’ll get two years out of Darden and you’ll start to get these inbounds on LinkedIn and recruiters and there are these temptations out there, and if you don’t have a filter for what’s important to you, it can consume you.”