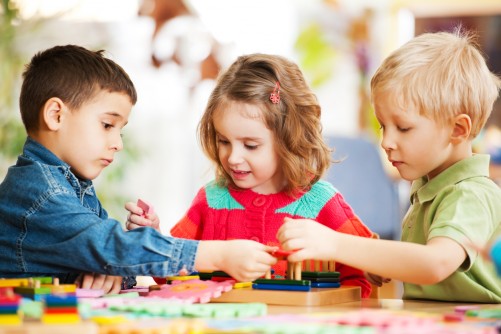 “We know that better spatial abilities lead to better math skills in early childhood, and they are strong predictors of future interest in careers in science and technology and engineering,” says researcher Hilary Miller. “So we’re targeting ways to enhance spatial skills at an early age.”

Newswise — MADISON, Wis. — It’s not how many words a kid knows; it’s how they choose them that tells Hilary Miller the most about their spatial skills.

That grasp of the layout of their physical word — understanding where they are relative to a friend, imagining how to rotate puzzle pieces to fit them together, conjuring a mental map of the park — is important.

“We know that better spatial abilities lead to better math skills in early childhood, and they are strong predictors of future interest in careers in science and technology and engineering,” says Miller, a graduate student studying child development at the University of Wisconsin–Madison. “So we’re targeting ways to enhance spatial skills at an early age.”

“At that age, they may have learned words like ‘above’ and ‘below’ that adults use often to describe a location,” Miller says. “But simply knowing the words doesn’t necessarily help. They have to know when that kind of information is useful.”

Miller showed each child a series of pictures in which a mouse appeared in different spots — atop objects that shifted from picture to picture in location, size and color — and asked the kids to describe the mouse’s location. She scored their answers based on how much relevant information they shared, weighing it against irrelevant cues (mentioning an attribute that all the objects share, for example).

While previous research has often judged children’s spatial skills based at least in part on the number of spatial words they know, Miller found her study subjects to have a range of descriptive abilities not limited by the size of their spatial vocabulary.

“They are describing where the mouse is by saying, ‘He’s on the big table,’ or ‘on the brown box,’” Miller says. “Those size and color words aren’t spatial terms in this context, but in the context of the picture they’re seeing they are really useful.”

The better the kids were at adapting to each image and supplying relevant information, the higher their scores tended to be on the tests of other spatial skills that predict future success in, say, math.

“We think it’s attention to relevant information that is propelling them to perform better, and not their ability to say particular words,” says Miller, whose work is supported by the National Institutes of Health and UW–Madison’s Waisman Center. “We’re hoping focusing on this early in childhood will help children get to the levels of success later on that seem to promote STEM interests.”

Because children learn about language by listening to the way it is used, adults can find everyday opportunities to help them develop the tools to build their spatial skills.

“When you talk to your children, use different kinds of language,” Miller says. “Be more conscious of how useful your spatial language is.”

The more diverse and relevant the words kids hear, the more they will start to make the same useful connections with language.

“Pointing and saying, ‘There are your shoes,’ is the sort of thing parents are probably doing most often,” Miller says. “But saying something like, ‘Your shoes are on the red rug,’ focuses your child on relevant spatial information. It’s practice for them with a different way to approach a problem.”