Zapping Bacteria with Sanitizers Made of Paper 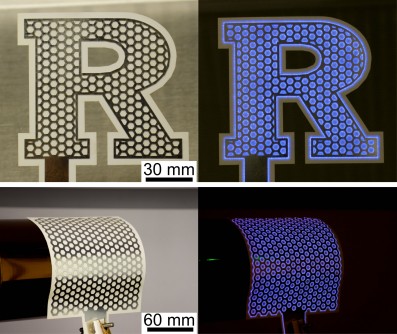 Paper-based plasma generators -- consisting of laminated assemblies of honeycomb-patterned, metallized paper -- are capable of sanitizing surfaces with 10 seconds of treatment. These devices are also customizable into varied planar geometries and bendable/mechanically flexible to conform to curved surfaces.

Newswise — Imagine wearing clothes with layers of paper that protect you from dangerous bacteria.

A Rutgers-led team has invented an inexpensive, effective way to kill bacteria and sanitize surfaces with devices made of paper.

“Paper is an ancient material, but it has unique attributes for new, high-tech applications,” said Aaron Mazzeo, an assistant professor in Rutgers’ Department of Mechanical and Aerospace Engineering. “We found that by applying high voltage to stacked sheets of metallized paper, we were able to generate plasma, which is a combination of heat, ultraviolet radiation and ozone that kill microbes.”

The researchers detail their invention in a study published online today in the Proceedings of the National Academy of Sciences. A video detailing the work is also available on YouTube.

In the future, paper-based sanitizers may be suitable for clothing that sterilizes itself, devices that sanitize laboratory equipment and smart bandages to heal wounds, among other uses, the study says. The motivation for this study was to create personal protective equipment that might contain the spread of infectious diseases, such as the devastating 2014 outbreak of Ebola in West Africa.

The researchers’ invention consists of paper with thin layers of aluminum and hexagon/honeycomb patterns that serve as electrodes to produce the plasma, or ionized gas. The fibrous and porous nature of the paper allows gas to permeate it, fueling the plasma and facilitating cooling.

“To our knowledge, we’re the first to use paper as a base to generate plasma,” said Jingjin Xie, the study’s lead author and a doctoral candidate in the Department of Mechanical and Aerospace Engineering.

In experiments, the paper-based sanitizers killed more than 99 percent of Saccharomyces cerevisiae (a yeast species) and more than 99.9 percent of E. coli bacteria cells. Most E. coli bacteria are harmless and are an important part of a healthy human intestinal tract. However, some types of E. coli can cause diarrhea, urinary tract infections, pneumonia and other illnesses, according to the U.S. Centers for Disease Control and Prevention.

“Preliminary results showed that our sanitizers can kill spores from bacteria, which are hard to kill using conventional sterilization methods,” said Qiang (Richard) Chen, study coauthor and a doctoral candidate in the Department of Plant Biology in Rutgers’ School of Environmental and Biological Sciences.

“Our next phase is to vigorously test how effective our sanitizer system is in killing spores,” said James F. White Jr., study coauthor and professor of plant pathology in the Department of Plant Biology.

Mazzeo said one of the goals of their ongoing research is to make sensors that resemble how human and animal skin provides protection from external microbes and bacteria, while detecting input (touch, force, temperature and moisture) from environmental surroundings. Such sensors might cover parts of prosthetics, buildings or vehicles. It also might be possible to sterilize vehicles, robots or devices before they enter contamination-prone environments and when they come out to keep them from contaminating people and clean environments.

Professor Mazzeo is a recent recipient of a 2017 NSF CAREER Award, which will allow his research group to continue work with papertronic sensors. The scientists will explore the design and fabrication of paper-based sensors for wearable devices capable of measuring brain waves and sweat to determine human alertness and stress. Their future work should lead to electronic devices that bridge the gap between machines and humans, while creating new processing techniques for renewable paper products.