Zebra stripes and their role in dazzling flies 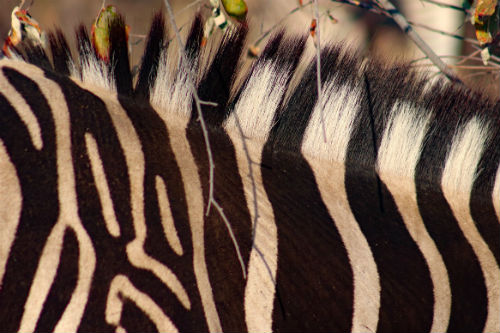 Close up of zebra stripes 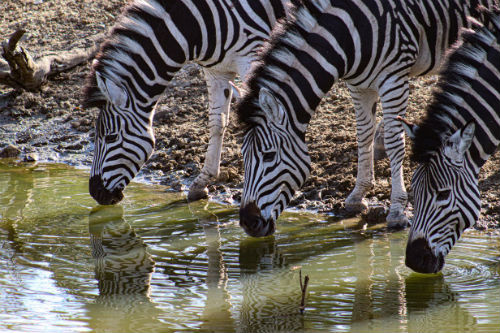 Newswise — The mystery of why zebras have their characteristic stripes has perplexed researchers for over a century.

Over the last decade, Professor Tim Caro at the University of Bristol’s School of Biological Sciences has examined and discredited many popular theories such as their use as camouflage from predators, a cooling mechanism through the formation of convection currents and a role in social interactions.

Stripes acting to confuse predators is another common explanation, but it too is flawed when looking at the scientific data. Instead, mounting evidence suggests that it is parasitic flies that are confounded by the zebra’s distinctive patterning.

In a new paper published today in the journal Proceedings of the Royal Society B, Bristol scientists have now provided significant depth to this hypothesis by narrowing down the possible mechanism.

Previously, the same researchers had shown that blood-sucking horseflies would approach horses in striped rugs as often as plain rugs, but then failed to land or slow down when they got close.

Essentially, stripes dazzled the flies, forcing them to collide with the skin or fly away altogether. In their new study they explored a potential mechanism explaining how the stripes lead to this outcome: the aperture effect.

Lead author Dr Martin How, also from Bristol’s School of Biological Sciences, said: “The aperture effect is a well-known optical illusion that, in human vision, is also known as the barber-pole effect. Moving stripes, such as those on the rotating barber-pole signs outside barbershops, appear to move at right angles to the stripe, rather than in their true direction, so the pole appears to move upwards, rather than around its axle.

“We set out to see if this illusion also takes place in the eyes of biting flies as they come to land on striped hosts.

“As any fly approaches a landing surface, it will adjust its speed according to how quickly the surface expands across its vision, enabling a slowed and controlled landing.

“Stripes however could disrupt this ‘optic flow’ through the aperture effect, leading the fly to believe the landing surface is further away than reality. Thus, the fly fails to slow down or land successfully.”

Despite its appeal to visual ecologists, this research found that the aperture effect is not the mechanism behind fly confusion through comparing fly landings on horses wearing striped versus checked rugs.

Since checked rugs provide visual input free from the aperture effect, one would expect flies to land on them without difficulty. Yet flies had real difficulties with this pattern - hardly landing on checked or striped rugs at all. Thus, stripes themselves are not unique to deterring tabanid horseflies, other patterns can be effective too.

Professor Caro, this paper’s senior co-author, added: “Not only do these exciting studies bring us closer to understanding one of the world’s most iconic and photogenic species, they will be of great interest to farmers attempting to reduce the damage caused by fly bites and even general horse-wear companies.”

This study was funded by the Institute for Advanced Studies at the University of Bristol and the Royal Society.

‘Zebra stripes, tabanid biting flies and the aperture effect’ by M. How, D. Gonzales, A. Irwin and T. Caro in Proceedings of the Royal Society B

‘Quick guide: Zebra stripes’ by T. Caro in Current Biology (due for publication on September 7 2020)

Caption: Close up of zebra stripes

Proceedings of the Royal Society B - August 2020