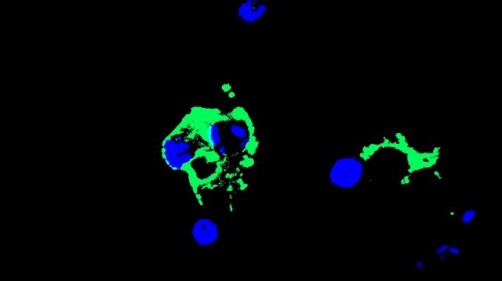 Newswise — Researchers at the University of California San Diego School of Medicine, with colleagues in Brazil, report that the Zika virus is transmitted from mother to fetus by infected cells that, ironically, will later develop into the brain’s first and primary form of defense against invasive pathogens.

The findings are published in the current online issue of Human Molecular Genetics.

“It’s a Trojan Horse strategy,” said Alysson Muotri, PhD, professor in the UC San Diego School of Medicine departments of Pediatrics and Cellular and Molecular Medicine. “During embryogenesis — the early stages of prenatal development — cells called microglia form in the yolk sac and then disperse throughout the central nervous system (CNS) of the developing child.

“In the brain, these microglia will become resident macrophages whose job is to constantly clear away plaques, damaged cells and infectious agents. Our findings show that the Zika virus can infect these early microglia, sneaking into the brain where they transmit the virus to other brain cells, resulting in the devastating neurological damage we see in some newborns.”

Beginning in 2015, a dramatic increase in children born with microcephaly or abnormally small heads and other birth defects was observed in Brazil. The phenomenon was subsequently linked to infection by the Zika virus, which Muotri and others confirmed last year caused birth defects in experimental models.

Typically, the Zika virus is transmitted to people through the bite of infected Aedes species mosquitoes. However, a pregnant woman can also pass the virus to her fetus, though scientists have not been able to precisely describe the mode of transmission.

“Considering the timing of transmission, we hypothesized that microglia might be serving as a Trojan horse to transport the virus during invasion of the CNS,” Muotri said.

To test their hypothesis, the researchers used human induced pluripotent stem cells to create two relevant CNS cell types: microglia and neural progenitor cells (NPCs), which generate the millions of neurons and glial cells required during embryonic development. Then they established a co-culture system that mimicked the interactions of the two cell types in vitro when exposed to the Zika virus.

Muotri and colleagues then tested whether an FDA-approved drug called Sofosbuvir, marketed as Sovaldi and used to treat hepatitis C, might limit viral infection of NPCs in co-culture with infected microglia. It did. “Sofosbuvir significantly decreased cell death of NPCs and the viral load in NPCs”

Though the findings are based on in vitro research and further investigation is necessary, Muotri said they were encouraging, suggesting microglial cells could be a therapeutic target for reducing Zika transmission into the CNS of developing fetuses.

“The co-culture system we’ve developed is robust and useful for studying neuro-immune interactions,” he said. “It can also serve as a drug-screening platform for discovering new therapeutic compounds against Zika virus infections in a human context.”

Disclosure: Muotri is a co-founder and has equity interest in TISMOO, a company dedicated to genetic analysis focusing on therapeutic applications customized for the autism spectrum disorder and other neurological disorders of genetic origin. The terms of this arrangement have been reviewed and approved by the University of California San Diego in accordance with its conflict of interest policies.