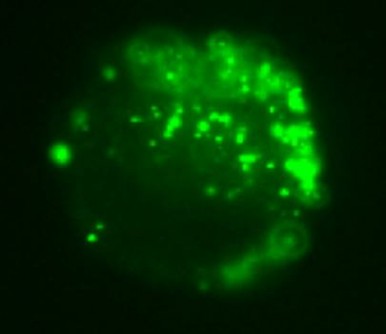 The immune system recognizes proteins unique to bacteria and immediately starts to recruit zinc (seen in green) into cells to help fight off the infection. New research from Ohio State scientists has found that adequate zinc is essential for keeping the immune system in balance, particularly during severe infections like sepsis.

Newswise — Columbus, OH - During a severe infection known as sepsis, a deficiency in zinc intake can cause an amplified and potentially deadly immune response, according to new research conducted by scientists at The Ohio State University. By analyzing the DNA of zinc-deficient mice with sepsis, the researchers identified a critical immune system pathway that relies on zinc to stop overproduction of an inflammatory protein that if left unchecked, can start to destroy healthy cells.

“When the body detects an infection, zinc is recruited to help produce immune response proteins, and then it’s used to stop their production,” said lead author Daren Knoell, PharmD, PhD, a professor of pharmacy and internal medicine at Ohio State. “But zinc deficiency during sepsis appears to cause a catastrophic malfunctioning of the system, resulting in a magnified and prolonged inflammatory response.”

Sepsis, a complication resulting from a systemic infection, is a leading cause of death in US intensive care units. As many as 20% of people who develop sepsis will die, not from the infection itself – but from the overload of inflammatory chemical signals created by the immune system which ultimately leads to organ failure.

Knoell and his research team found that zinc moderates the pathway that controls the “on-off switch” of genes that produce immune response proteins, preventing the inflammation they cause from harming healthy tissue. It’s the second zinc-dependent immune regulating pathway that Knoell and his team have discovered in the past five years.

“This research builds upon our past findings and further demonstrates that our immune system requires zinc to achieve a balanced and effective defense against overwhelming infection,” said Knoell. “This new evidence provides further incentive to determine the extent to which zinc may be useful to prevent or treat sepsis, particularly in patients that may be zinc deficient.”

While the findings seem to suggest that zinc supplementation could benefit patients at risk for sepsis, Knoell says it’s not that simple.

“During illness, the body diverts zinc from the blood to the organs, so a deficiency is hard to detect, particularly in people who are already sick,” said Knoell, who is a member of Ohio State’s Food Innovation Center. “Without a way to better define the deficiency, we aren’t able to define the ideal patient or a therapeutic dose of zinc.”

Determining zinc’s role in sepsis is also challenging. Next to iron, zinc is the most abundant mineral in the human body, interacting with as many as 10,000 proteins within the genome. While scientists have known that zinc is essential to human health and the immune system for hundreds of years, until recently, very little was known about how it functions on a molecular level.

To help identify genes and signaling pathways that may be influenced by zinc, Knoell and his team performed a genome-wide microarray analysis of lung tissue taken from zinc-deficient mice with sepsis. They found that in the presence of sepsis, multiple networks and pathways were impacted by the zinc deficiency. One of the most robust alterations was observed in the JAK-STAT3 pathway and the production of serum amyloid A (SAA) – a protein which has only recently been identified as a key player in the body’s immune response.

“Without zinc present in sufficient quantities, the JAK-STAT pathway keeps giving the genes the “on” signal, and continues production of this inflammatory protein,” said Knoell. “When we add zinc back into the equation, it stops JAK-STAT, SAA production and the acute response activity.”

Knoell says that finding SAA’s presence in the development of sepsis is interesting, as the protein has been connected with other inflammatory diseases such as Alzheimer’s and cardiovascular disease.

“These findings not only provide some evidence for why zinc-based cold remedies may work, but also provide hints of how a zinc imbalance might also play a role in chronic diseases connected with inflammation.”

Knoell, who is also a researcher at Ohio Stat’s Dorothy M. Davis Heart and Lung Institute, has been studying the relationship between zinc and sepsis for 8 years. Previous research by his lab identified zinc’s impact on another immune regulating pathway called NF-kappaB. Knoell’s lab was the first to show how the mineral helped control activity of an NF-kappaB protein called IKKbeta in human immune cells, subsequently reducing inflammation and preventing damage to cells.

Earlier research conducted by Knoell also showed that zinc-deficient mice developed overwhelming inflammation in response to sepsis and were three times more likely to die than mice on a normal diet. Zinc supplementation improved outcomes in the zinc-deficient mice.

Knoell says a next step is to see if these recent findings apply to humans. Knoell says his lab and other researchers are also actively looking for zinc-related biomarkers that can help scientists determine how much zinc is being utilized by the immune system and to help predict who might be at risk for developing sepsis.

“Once we can determine at risk patients, then we can start a much more systematic evaluation of zinc supplementation,” Knoell said. “With so few interventions available for sepsis, I’m hopeful we’ll see more energy around developing a zinc-based therapy in the next few years.”

Knoell’s most recent study was published in PLoSOne, and received funding from the National Heart, Lung, and Blood Institute and biostatistics support from the Ohio State Center for Clinical and Translational Science. The study was conducted by co-author Mingjie Liu, Phd and other researchers from the Knoell Lab. 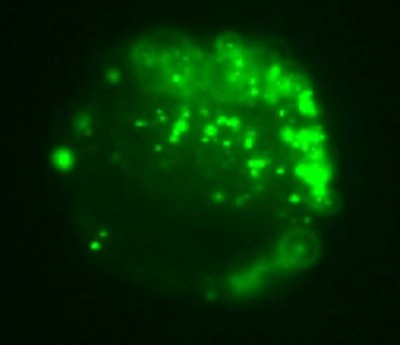 Caption: The immune system recognizes proteins unique to bacteria and immediately starts to recruit zinc (seen in green) into cells to help fight off the infection. New research from Ohio State scientists has found that adequate zinc is essential for keeping the immune system in balance, particularly during severe infections like sepsis.