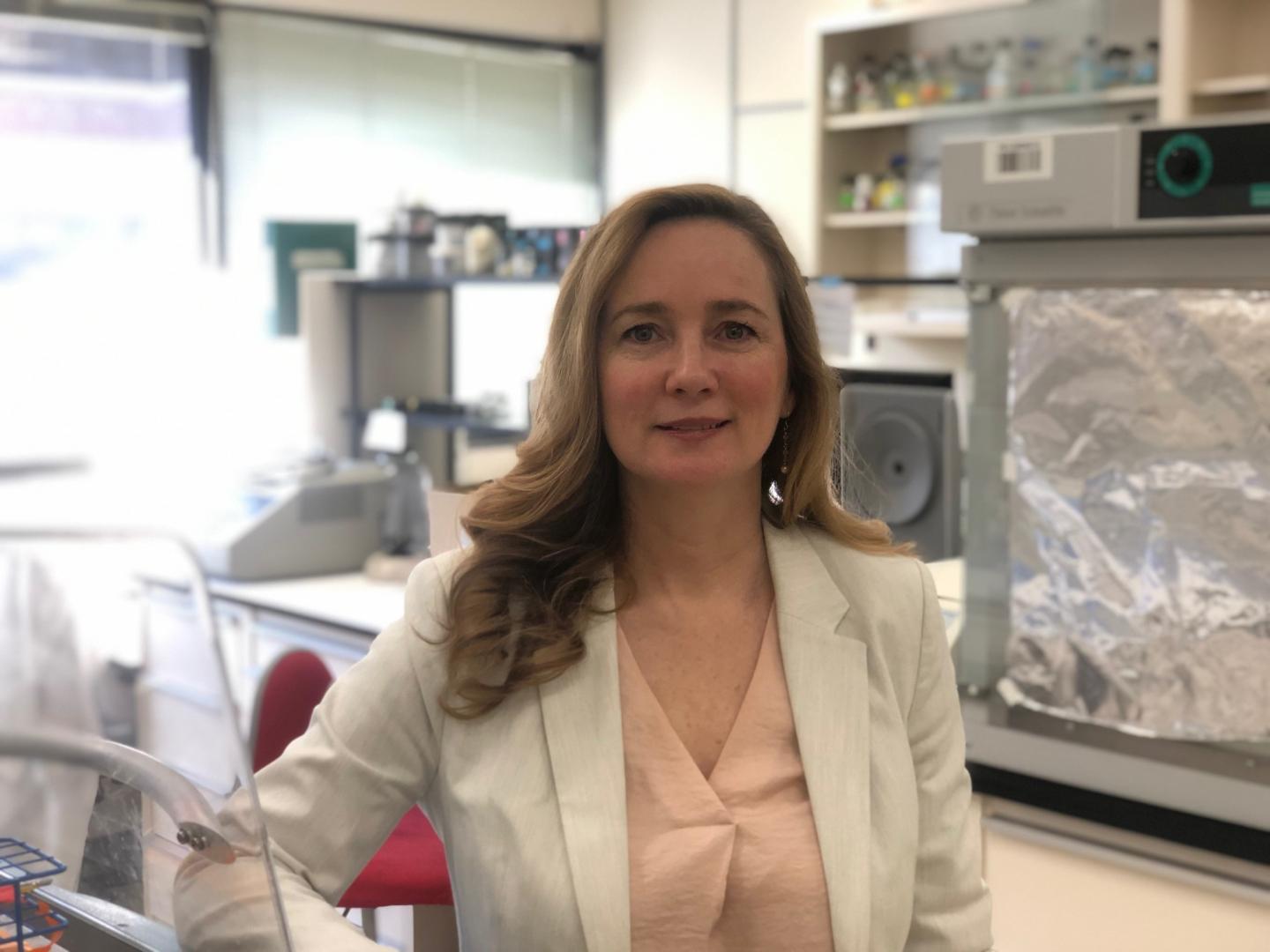 Biochemist Joanne Lemieux worked with three other University of Alberta researchers on a new study showing that a drug that cures deadly peritonitis in cats also works well enough against the coronavirus that causes COVID-19 to fast-track it into human clinical trials.

Newswise — Researchers at the University of Alberta are preparing to launch clinical trials of a drug used to cure a deadly disease caused by a coronavirus in cats that they expect will also be effective as a treatment for humans against COVID-19.

"In just two months, our results have shown that the drug is effective at inhibiting viral replication in cells with SARS-CoV-2," said Joanne Lemieux, a professor of biochemistry in the Faculty of Medicine & Dentistry.

"This drug is very likely to work in humans, so we're encouraged that it will be an effective antiviral treatment for COVID-19 patients."

The drug is a protease inhibitor that interferes with the virus's ability to replicate, thus ending an infection. Proteases are key to many body functions and are common targets for drugs to treat everything from high blood pressure to cancer and HIV.

First studied by U of A chemist John Vederas and biochemist Michael James following the 2003 outbreak of severe acute respiratory syndrome (SARS), the protease inhibitor was further developed by veterinary researchers who showed it cures a disease that is fatal in cats.

The work to test the drug against the coronavirus that causes COVID-19 was a co-operative effort between four U of A laboratories, run by Lemieux, Vederas, biochemistry professor Howard Young and the founding director of the Li Ka Shing Institute of Virology, Lorne Tyrrell. Some of the experiments were carried out by the Stanford Synchrotron Radiation Lightsource Structural Molecular Biology program.

Their findings were published today in the peer-reviewed journal Nature Communications after first being posted on BioRxIV, a research website.

"There's a rule with COVID research that all results need to be made public immediately," Lemieux said, which is why they were posted before being peer-reviewed.

She said interest in the work is high, with the paper being accessed thousands of times as soon as it was posted.

Lemieux explained that Vederas synthesized the compounds, and Tyrrell tested them against the SARS-CoV-2 virus in test tubes and in human cell lines. The Young and Lemieux groups then revealed the crystal structure of the drug as it binds with the protein.

"We determined the three-dimensional shape of the protease with the drug in the active site pocket, showing the mechanism of inhibition," she said. "This will allow us to develop even more effective drugs."

Lemieux said she will continue to test modifications of the inhibitor to make it an even better fit inside the virus.

But she said the current drug shows enough antiviral action against SARS-CoV-2 to proceed immediately to clinical trials.

"Typically for a drug to go into clinical trials, it has to be confirmed in the lab and then tested in animal models," Lemieux said. "Because this drug has already been used to treat cats with coronavirus, and it's effective with little to no toxicity, it's already passed those stages and this allows us to move forward."

"Because of the strong data that we and others have gathered we're pursuing clinical trials for this drug as an antiviral for COVID-19."

The researchers have established a collaboration with Anivive Life Sciences, a veterinary medicine company that is developing the drug for cats, to produce the quality and quantity of drug needed for human clinical trials. Lemieux said it will likely be tested in Alberta in combination with other promising antivirals such as remdesivir, the first treatment approved for conditional use in some countries including the United States and Canada.

The U of A researchers' work was funded by the Canadian Institutes of Health Research, the Natural Sciences and Engineering Research Council of Canada, Alberta Innovates, Li Ka Shing Institute of Virology and the GSK Chair in Virology.