On June 14, 2021 at Bhumisirimangalanusorn Building, Chulalongkorn Memorial Hospital, the Thai Red Cross Society, the Faculty of Medicine and the Chula Vaccine Research Center (CVRC), Faculty of Medicine, Chulalongkorn University conducted its first phase of clinical trial on volunteers who have passed the screening process and deemed to be in good health.  The process is continuing on to phase 2 to monitor immunity reactions to the ChulaCov19 vaccine under the supervision of medical experts, doctors, nurses and the research team.

According to Professor Suttipong Wacharasindhu, M.D., Director of Chulalongkorn Memorial Hospital, the Thai Red Cross Society and Dean of the Faculty of Medicine, since the spread of COVID-19 in Thailand Chulalongkorn Memorial Hospital and the Faculty of Medicine, Chulalongkorn University have assured the public that its facilities, personnel and state-of -the-art technology can be used efficiently in the screening and treatment for members of the public.  There is also the Vaccine Research Center of Chula’s Faculty of Medicine, a medical research institution that prides itself on the collaborative efforts of medical researchers and scientists who have worked on developing vaccines to serve the needs of the people both at the national and international levels.  These efforts have reached the stage where the ChulaCov19 vaccine has now been tested in the first phase of clinical trial on a number of volunteers and continued on to the second phase under close supervision of the various sectors involved, along with a team of highly qualified medical practitioners from CVRC.  This is to offer the people the greatest possible confidence in all the phases of the clinical trials.

“We wish to express our appreciation to the Ministry of Public Health, the National Vaccine Institute, CVRC, and several other agencies from the government, the private as well as the public sectors, along with medical researchers of high repute at both the national and international levels.  It is due to their efforts that we have achieved this level of success where we are now ready to manufacture the vaccine and perform clinical trials on participating volunteers.” said the Dean of the Faculty of Medicine.

Professor Kiat Ruxrungtham, M.D., Director of the CVRC added that the development of the ChulaCov 19 was made possible with the support from the government, private and public sectors such as the National Vaccine Institute, the National Research Council of Thailand, Chulalongkorn University’s Second Century Fund, and donations from the Faculty of Medicine Alumni Association’s Vaccine Research Fund, the Red Cross Society of Thailand.

ChulaCov19 was designed and developed by a team of Thai researchers working collaboratively with Pennsylvania University’s Professor Drew Weissman a physician-scientist renowned for his discovery of the technology used in the production of this vaccine.  We use the tiny particles of the Corona Virus’ genetic material (mRNA) to tell cells to make specific viral proteins such as the spike protein to enter host cells and boost them to build immunity to combat the virus once there is contact with the vaccine.  After this mRNA has performed its role of enabling the body to develop the protein within a few days, the mRNA will disintegrate and not leave any build up in the body whatsoever.

Prior to this, the CVRC has been successful in its trial on monkeys and mice where it was found to be able to prevent the virus from entering the bloodstream and increased the level of immunity significantly.  This led to the manufacturing and clinical trials in the first phase to volunteers starting on June 14, 2021.  The trial phases are divided into:

The First phase trial is carried out in 72 volunteers from two age groups:  the first group with 36 volunteers aged 18-55 years; the second with 36 volunteers aged 65-75.  Both groups are divided into sub-groups each with a different dosage of 10, 25 and 50 micrograms.  This is to determine the dosage at which the ChulaCov19 shows the greatest efficacy, since at present Moderna’s dosage is 100 micrograms while Pfizer is 30 micrograms.  The CVRC will need to find out whether the dosage for Thais or Asians should be 10, 25 or 50 micrograms in order to ensure safety while increasing immunity levels.  Then the trial will move on to Phase 2.

The second-phase trial is expected to commence around early August 2021 and the number of volunteers will be increased to 150-300 persons.

“For our vaccine trails, the safety of our volunteers is our greatest concern.  The injections will therefore take time and should be carried out incrementally.  The same standards are applicable throughout the country to determine if the vaccine can really prevent illness and death.  If the World Health Organization (WHO) or the National Institutes of Health (NIH) is able to set the standards of immunity boosting level for a vaccine to be considered efficient” then this should help reduce the process.  For example, if the standard for a quality Covid-19 vaccine is determined as the ability to boost the immunity at higher than 80 IU (international units), if ChulaCov19 can achieve a higher immunity boosting level, then it meets the requirements of efficiency, and can skip the third phase trial and may be given the green light to be manufactured for a large number of people before the middle of next year” Prof. Kiat, M.D. explained.

Outstanding qualities of the ChulaCov19 Vaccine 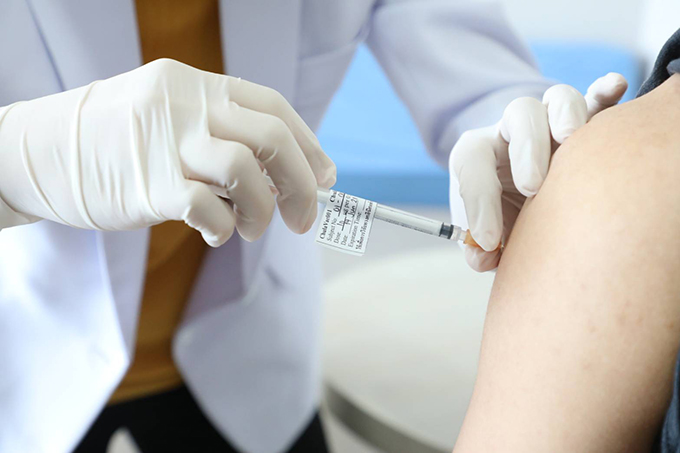 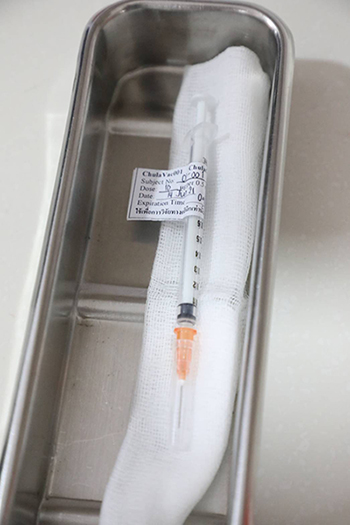 Finally, the CVRC has prepared for animal trials of the second batch of vaccine alongside the aforementioned first batch clinical trials in case of drug resistance or mutations – a matter that is a cause of immense concern all over the world with the emerging variants such as the English, Indian, South African and Brazilian.  The ChulaCov19 vaccine has been designed, developed and manufactured by Thais and enjoys excellent support and collaboration from all relevant sectors. If things proceed as planned, it is hoped that a vaccine capable of preventing mutated and drug resistant variants can be tested on our volunteers by the fourth trimester of this year.

The volunteers in the project shared their feelings saying that they decided to take part in the project upon hearing the news calling for volunteer applicants on social media.  This was the first day of the trial and they did not feel nervous or anxious since they had been briefed on what to expect and were warmly welcomed by the doctors, nurses and staff who reassured them tremendously.  They said they looked forward to seeing Thailand with a vaccine of its own and felt confident in the potentials of Chula medical doctors who have been able to invent and develop a vaccine that is suitable for Thais.  They ask that the Thai people to put their trust in the potentials of the Thai medical doctor team which is a matter of great pride to all of us to now have a vaccine we can call our own.