Coronavirus Race for Survival in the Epithelium: the Fastest Autowave Wins the Competition of Viral Strains 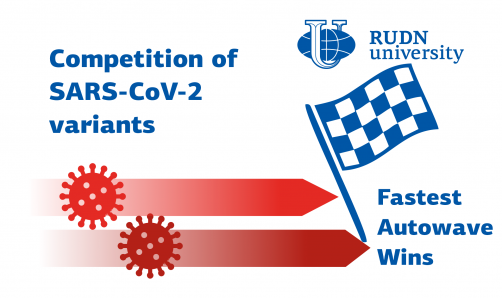 Newswise — Scientists from the Nikol'skii Mathematical Institute of RUDN University built a mathematical model that describes the self-sustaining propagation of virus concentration waves – autowaves – in a tissue or cell culture, taking into account their competition for resources, that is the infected cells. The authors applied the constructed model to study variants of the new coronavirus, Delta and Omicron. It turned out that the autowave with the higher speed of spatial propagation wins, while the slow autowave dies. The studied processes relate to the competition and evolution of viral strains in the upper respiratory tract in vivo. In addition, the proposed approaches can be used when creating new methods for studying viruses in vitro. The work was published in Vaccines.

The spread of a virus is a complex process that consists of a large number of simpler processes and is described by several variables that change in concert in time and space. Even in a relatively simple system – cell culture or tissue, without taking into account the immune response – the result is determined by the total balance of rates of diffusion of viral particles, virus penetration into infected cells, virus reproduction in the cells, its degradation, and death of infected cells. Diffusion is a physical process of material spatial transport from a high-concentration zone to a lower-concentration zone (similar to the heat transfer from a hot place to a cold one). The rest of the processes are local, and they occure in the cell (reproduction of viral particles), on its surface (cell infection and release of new viral particles), or outside the cell (virus degradation).

“The explosive nature of virus reproduction in an infected cell makes the system non-linear, and its study “on paper” becomes practically impossible. We have to use the numerical, computer methods. It is well known that mathematical modeling helps to analyze and understand complex phenomena in different biological systems,” said Alexey Tokarev, PhD, Associate Professor at S.M. Nikol'skii Mathematical Institute, RUDN University.

In the context of the SARS-CoV-2 pandemic, when several variants of the virus operate simultaneously, the urgent task is to develop new methods for analyzing and controlling the spread of emerging viral strains that compete with each other. This study provides insight into how the winner of this viral competition is determined. The main result of the work is that when two viruses compete within the same system, the one with the higher speed of spatial propagation of its autowave ultimately wins.

The main workflow of mathematicians consisted in writing, analyzing and solving the set of partial differential equations of the reaction-diffusion type. These equations determine how various variables of the system change in time and space: the concentrations of healthy cells, infected cells, and those cells that already secrete viral particles while dying at the same time. After analyzing this set of equations, scientists obtained an estimate of the autowave speed and expressions for the virus replication coefficient, the final concentration of uninfected cells, and the integral concentration of the virus (viral load). Numerical calculations made it possible to verify approximate analytical estimates and determine the characteristics of the autowave more accurately. To determine the parameters of the model, scientists used recent experimental data on the reproduction of the Delta and Omicron variants in human epithelial cells.

“We have shown the possibility of creating new experimental methods for studying viruses – methods that provide fundamentally new information both about individual strains and about their interaction with each other. The principle is that these methods should take into account spatial effects, in particular, diffusion limitation and spatial inhomogeneity, which allow the autowave properties of the considered nonlinear systems to show up. We believe that experimenters should determine the speed with which waves of virus concentration propagate in space. For fundamental science, this approach provides a new understanding of the transmission of infection both in tissues and between people. For practical application, new methods will facilitate the comparison between viral strains and testing new antiviral agents,” said Alexey Tokarev, PhD, Associate Professor at S.M. Nikol'skii Mathematical Institute, RUDN University.