COVID-19: Second Wave for Some; Others Remain in First Wave

Thirty-one U.S. states plus D.C. were experiencing a second wave of COVID-19 cases while 13 others were still in the first wave at the end of July.

Newswise — WASHINGTON, September 22, 2020 -- As the COVID-19 pandemic spreads around the world, some locations have experienced decreasing numbers of cases followed by an increase. This has ignited a public debate: Can we call this a second wave?

In the journal Chaos, by AIP Publishing, mathematicians report a method to analyze COVID-19 case numbers for evidence of a first or second wave. The authors studied data from all 50 U.S. states plus the District of Columbia for the seven-month period from Jan. 21 to July 31, 2020. They found 31 states and D.C. were experiencing a second wave as of the end of July.

Their method smooths raw daily case count data to eliminate artificially low counts over weekends and even some negative numbers that occur when localities correct errors. After smoothing the data, a numerical technique is used to find peaks, P, and troughs, T. From this, turning points can be identified.

A turning point occurs when a falling curve surges upward or a rising curve turns downward. Only those sequences where the peak and trough amplitudes differ by a certain minimum amount are counted. A second wave that's less than one-fifth the size of the first doesn't qualify as a “second wave” -- it's just too small. Fluctuations can occur when a curve flattens for a while but continues to increase without going through a true downturn, so the method eliminates these false counts.

Thirteen states, including Georgia, California, and Texas, had increasing case numbers throughout the entire seven-month period. These states are considered to be still in their first wave. Thirty-one other states, including Florida and Ohio, exhibit sequences of the form TPTP -- zero cases to a first peak, then another trough and peak. This is the signature of a second wave.

New York and New Jersey completely flattened their curves by the end of July. The analysis confirms these two states experienced just one wave.

The investigators also carried out a month-by-month deeper investigation and grouped the states into clusters according to how their case numbers changed over time. The states in a cluster have similar dynamic profiles, but the cluster membership varies as the epidemic spreads.

“Similarities within clusters can help identify common characteristics of the states that have most and least successfully managed COVID-19,” said author Nick James. “After an early first surge, Florida reduced restrictions and has since experienced a long and steep second surge,” he said. This contrasts with New York and New Jersey, who kept restrictions in place and have, so far, avoided a second wave.

“The real moral of this paper is that COVID-19 is highly infectious and very difficult to control,” said author Max Menzies.

“A true turning point, where new cases are legitimately in downturn and not just exhibiting stable fluctuations, should be observed before relaxing any restrictions.”

The authors have also applied their method to Brazil, which has a statelike structure, and found similar results. 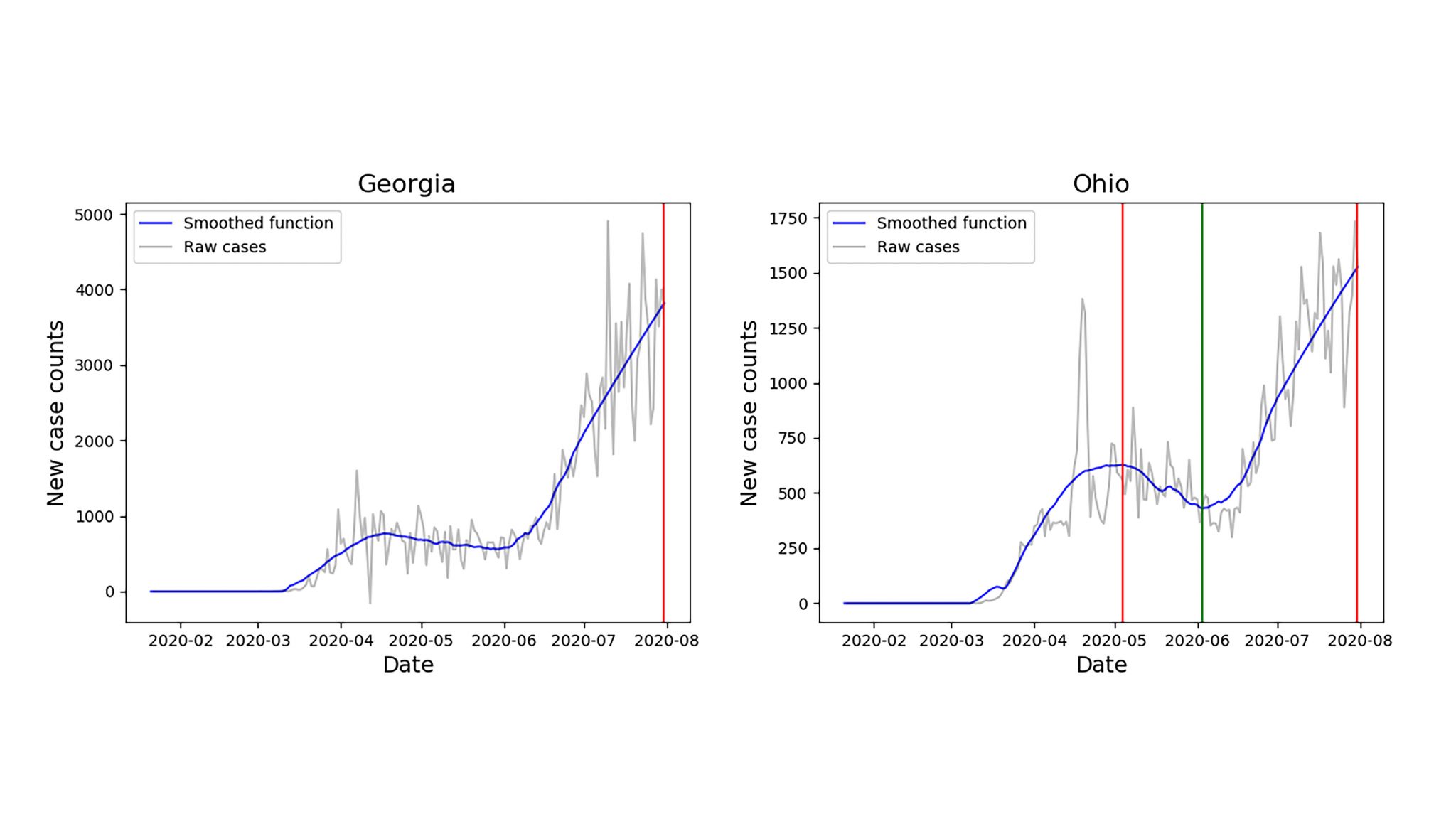 Caption: Smoothed time series and identified turning points for Georgia and Ohio. Through the identification of "true" turning points, Georgia is determined to be in its first wave, while Ohio is determined to be in its second wave. Both states exhibit their greatest case counts (up to smoothing) on the final day of analysis. Exact daily counts vary depending on source and the date the data was accessed. 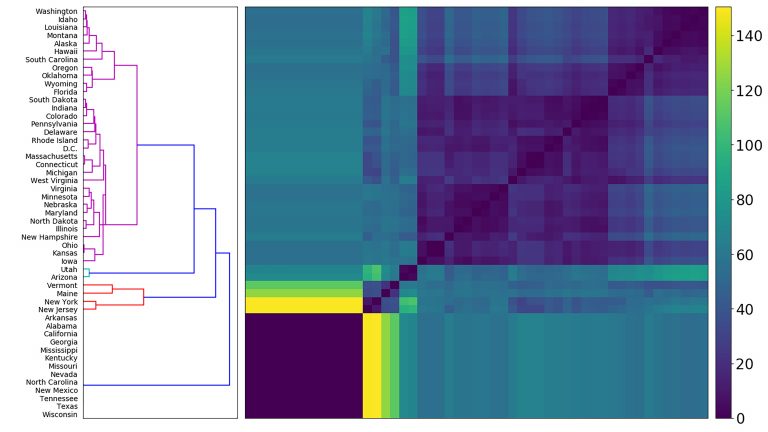 Caption: This figure groups states according to similarity in their turning points in new case trajectories. Five primary (sub)clusters of time series are identified with the following behaviors: the top 31 states plus D.C. are beyond their first wave and are now experiencing a second wave. The 13 states at the bottom are still in their first wave. The final six states in the middle of the diagram have either flattened the curve after one wave (New York and New Jersey), are coming off the first wave (Utah and Arizona) or have fully completed their second wave (Vermont and Maine).