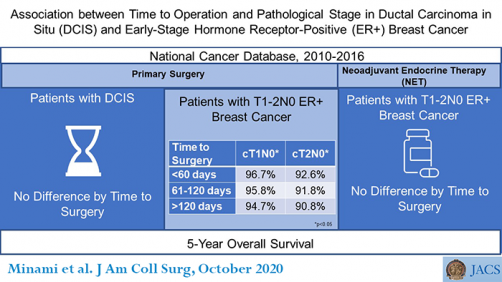 Newswise — CHICAGO: A new breast cancer study brings reassuring findings for women with early-stage breast cancer who were forced to delay their cancer operations because of the Coronavirus Disease 2019 (COVID-19) pandemic. A longer time from diagnosis to surgical treatment does not lower overall survival of women with early-stage breast cancer who underwent delayed operations before the pandemic, according to the study results, which are published as an “article in press” on the Journal of the American College of Surgeons website in advance of print.

“Usually we take these patients with very small tumors directly to surgery, so it is a big change in practice to first put those patients on tamoxifen or an aromatase inhibitor,” Dr. Minami said. “What we can say from our findings is that despite the delay in surgical therapy, because you were on neoadjuvant endocrine therapy, we do not think that your survival will at all be impacted.”

The study included data from nearly 379,000 patients in two groups. One group had ductal carcinoma in situ (DCIS), the earliest form of breast cancer, also called stage 0 or noninvasive. The other group had small invasive tumors—stage I and limited stage II—that had not spread to nearby lymph nodes and were ER-positive.

Surgical intervention delays due to COVID-19

These groups, Dr. Minami said, represent most breast cancer patients who needed to postpone their nonurgent operations early in the COVID-19 outbreak according to the surgical prioritization recommendations of the COVID-19 Pandemic Breast Cancer Consortium. In March, the Consortium recommended NET for patients with ER-positive DICS and ER-positive, invasive early-stage breast cancer while they waited for their operations.1  At that time, the Consortium included the American Society of Breast Surgeons, National Accreditation Program for Breast Centers, National Comprehensive Cancer Network, American College of Surgeons Commission on Cancer, and American College of Radiology.

To better understand the ramifications of these surgical delay tactics, the researchers conducted this study using the National Cancer Database and analyzed data for 378,839 patients with early-stage breast cancer treated from 2010 to 2016. Cosponsored by the ACS and the American Cancer Society, this database includes information on more than 70 percent of newly diagnosed cancer cases in the United States and is the largest cancer registry of its kind.

The researchers evaluated whether longer time to surgical treatment up to one year after diagnosis had an association with final pathologic staging of the cancer or with five-year overall survival.

In women with invasive early-stage breast cancer, a longer time to the initial cancer operation showed no association with pathologic upstaging, the researchers reported. Upstaging is a change to a higher cancer stage based on surgical and pathologic findings, compared with the clinical stage—what a surgeon determined from physical examination and imaging results.

Women with ER-positive DCIS, however, had a slightly increased odds of pathologic upstaging with a surgical delay exceeding 60 days, the researchers reported. Patients whose DCIS was ER-negative (not estrogen-fueled) had a higher risk of upstaging only if they underwent an operation more than 120 days after diagnosis; they had an odds of 1.36 to 1 compared with patients who underwent surgical treatment within the first 60 days, according to the article.

This increase in upstaging among DCIS patients had no impact on their overall survival, Dr. Minami said.

She stressed, however, that the patient population in their study differs from the patients who received NET during the pandemic. Before the pandemic, NET was not in wide use for U.S. patients with early-stage, ER-positive breast cancer.2 Study participants who received NET from 2010 to 2016 did so for specific reasons, such as older age and coexisting illnesses, whereas in the pandemic, NET recipients were “almost an unselected population,” Dr. Minami explained.

She added that although the researchers used “the best data currently available to study the possible outcomes of oncologic surgical delays,” determination of the actual impact of COVID-19-related surgical delays requires study in patients treated during this time.

Despite this study limitation, senior study author Elizabeth Mittendorf, MD, PhD, FACS, professor of surgery at Brigham and Women's Hospital, said she has found the study findings helpful to share with her patients who experienced surgical delays.

Citation: Association between Time to Operation and Pathological Stage in Ductal Carcinoma in Situ and Early-Stage Hormone Receptor-Positive Breast Cancer. Journal of the American College of Surgeons. DOI: https://doi.org/10.1016/j.jamcollsurg.2020.06.021

About the American College of Surgeons The American College of Surgeons is a scientific and educational organization of surgeons that was founded in 1913 to raise the standards of surgical practice and improve the quality of care for surgical patients. The College is dedicated to the ethical and competent practice of surgery. Its achievements have significantly influenced the course of scientific surgery in America and have established it as an important advocate for all surgical patients. The College has more than 82,000 members and is the largest organization of surgeons in the world. For more information, visit www.facs.org.