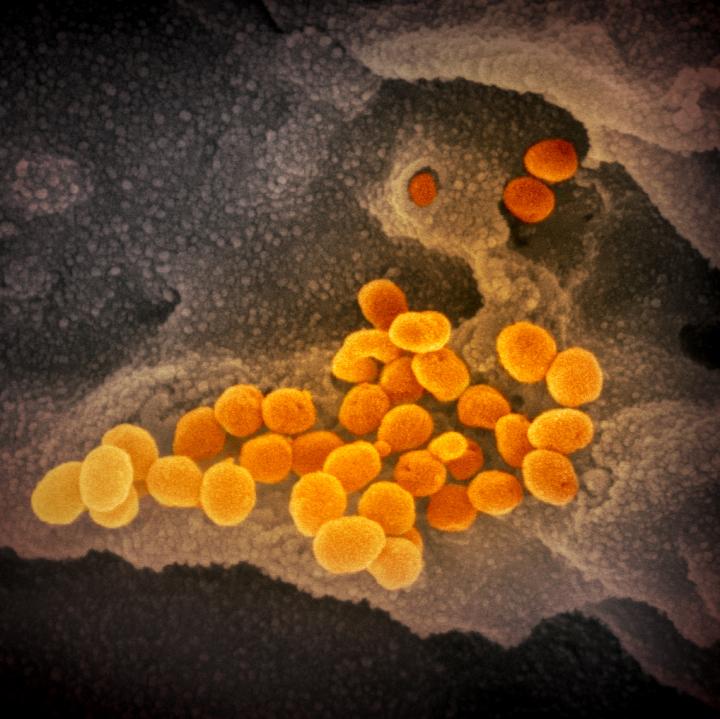 This scanning electron microscope image shows SARS-CoV-2 (orange), the virus that causes COVID-19, isolated from a patient in the U.S. The virus is emerging from the surface of cells (gray) cultured in the lab. Image captured and colorized at NIAID's Rocky Mountain Laboratories (RML) in Hamilton, Montana.

Newswise — WHAT: The experimental antiviral drug MK-4482 significantly decreased levels of virus and disease damage in the lungs of hamsters treated for SARS-CoV-2 infection, according to a new study from National Institutes of Health scientists. SARS-CoV-2 is the virus that causes COVID-19. MK-4482, delivered orally, is now in human clinical trials. Remdesivir, an antiviral drug already approved by the U.S. Food and Drug Administration for use against COVID-19, must be provided intravenously, making its use primarily limited to clinical settings.

In their study, published in the journal Nature Communications, the scientists found MK-4482 treatment effective when provided up to 12 hours before or 12 hours after infecting the hamsters with SARS-CoV-2. These data suggest that MK-4482 treatment potentially could mitigate high-risk exposures to SARS-CoV-2, and might be used to treat established SARS-CoV-2 infection alone or possibly in combination with other agents.

The same research group, located at Rocky Mountain Laboratories, part of NIH's National Institute of Allergy and Infectious Diseases in Hamilton, Montana, developed the hamster model last year to mimic SARS-CoV-2 infection and mild disease in people. The University of Plymouth in the United Kingdom collaborated on these most recent studies.

The scientists determined the MK-4482 treatment doses for this study based on previous experiments performed in mouse models of SARS-CoV-1 and MERS-CoV. In those studies, MK-4482 was effective at stopping the viruses from replicating.

With funding support from NIAID, Emory University's Drug Innovation Ventures group in Atlanta developed MK-4482 (also known as molnupiravir and EIDD-2801) to treat influenza. Merck and Ridgeback Biotherapeutics are now jointly developing and evaluating MK-4482 as a potential COVID-19 treatment. The drug is in Phase 2 and 3 human clinical studies.

NIAID conducts and supports research--at NIH, throughout the United States, and worldwide--to study the causes of infectious and immune-mediated diseases, and to develop better means of preventing, diagnosing and treating these illnesses. News releases, fact sheets and other NIAID-related materials are available on the NIAID website.

About the National Institutes of Health (NIH): NIH, the nation's medical research agency, includes 27 Institutes and Centers and is a component of the U.S. Department of Health and Human Services. NIH is the primary federal agency conducting and supporting basic, clinical, and translational medical research, and is investigating the causes, treatments, and cures for both common and rare diseases. For more information about NIH and its programs, visit http://www.nih.gov/.