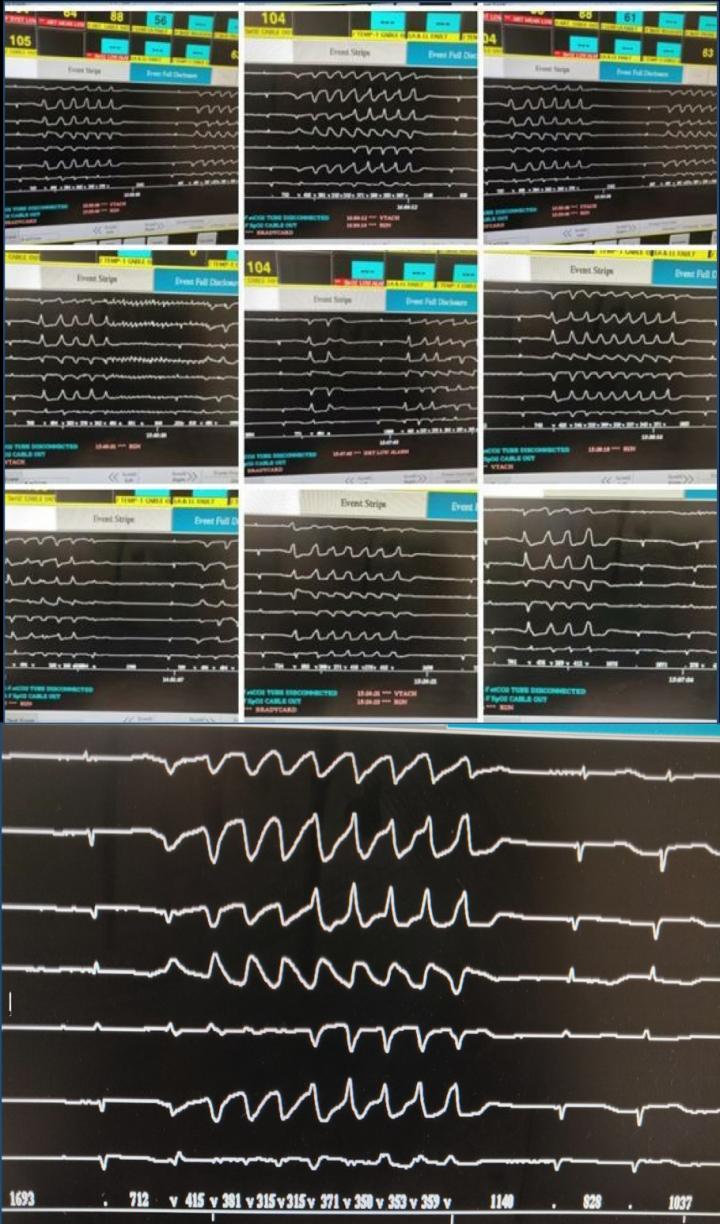 Multiple episodes of torsade de pointes as recorded in the remote electrocardiographic monitoring area outside the designated coronavirus disease ward.

Newswise — Philadelphia, June 18, 2020 - A patient who met many of the published safety guidelines for chloroquine therapy against COVID-19 was observed to have a very abnormal ECG pattern after treatment began, leading to multiple episodes of torsade de pointes (TdP), a life-threatening arrhythmia in which the lower chambers of the heart beat out of sync with the upper chambers. Her condition was resolved after chloroquine was discontinued, investigators report in Heart Rhythm, the official journal of the Heart Rhythm Society, the Cardiac Electrophysiology Society, and the Pediatric & Congenital Electrophysiology Society, published by Elsevier.

Chloroquine and hydroxychloroquine are commonly used to treat malaria and some rheumatic diseases. Their use as a treatment for COVID-19 has been widely debated in medical journals and the popular press. The authors of this case report present the first description of TdP due to chloroquine treatment in a patient with COVID-19.

Lead investigator Yishay Szekely, MD, Department of Cardiology, Sourasky Tel Aviv Medical Center and Sackler School of Medicine, Tel Aviv University, Tel Aviv, Israel, observes, "On the one hand, these drugs are known to cause prolongation of a specific ECG interval called QT interval. On the other hand, there is no evidence of sudden, unexplained death when they are used to treat malaria. And by the same token, neither the American nor the European rheumatology societies recommend electrocardiographic (ECG) surveillance for patients who receive long-term treatment with hydroxychloroquine."

The patient, an 84 year-old women with a history of breast cancer and controlled hypertension was admitted to the hospital with COVID-19. Her medications included letrozole, prescribed for breast cancer, and memantine, prescribed for Alzheimer's disease. An ECG found her corrected QT (QTc) interval was 462 milliseconds, borderline high but still below the 500-millisecond limit suggested by safety guidelines for chloroquine treatment. Her condition worsened and chloroquine therapy was introduced. After five days of treatment, there was no change to her clinical status, however, a follow-up ECG showed signs of an extremely elongated QTc interval of 627 milliseconds. Chloroquine was discontinued, as were other drugs known or suspected of causing QT-prolongation, including memantine and letrozole.

The patient was placed on a continuous ECG monitor and given potassium supplements to prevent arrhythmias. Six hours later episodes of TdP were noted on her ECG. She received treatment that led to an immediate resolution of the ventricular arrhythmias, and her QT interval gradually normalized. She was released after two weeks.

Dr. Szekely notes that the memantine the patient was taking likely contributed to the proarrhythmic effects of chloroquine. However, her QTc interval spiked only after chloroquine was introduced. "This clearly points to chloroquine as the culprit drug of her TdP." The breast cancer medication letrozole is actually considered safer from a QT interval point of view than other medications used to treat breast cancer.

"Chloroquine therapy is not free of risk in patients with COVID-19, particularly in those with high risk features for QT prolongation and TdP," says Dr. Szekely. "Given its questionable efficacy in the treatment of COVID-19 and risk of QT interval prolongation and torsade de pointes, chloroquine treatment must be considered thoroughly and reviewed on a regular basis."

In a sample of over 400 older adults in Argentina who had recovered from COVID-19, more than 60% displayed some degree of cognitive impairment, a researcher from The University of Texas Health Science Center at San Antonio reported July 29 at the Alzheimer’s Association International Conference.

As the coronavirus Delta variant surges throughout the country and mask and vaccine mandates are being considered, a new national survey finds that almost 20 percent of Americans say it is unlikely that they will get the COVID-19 vaccine.

The COVID-19 situation may have restricted people’s space, but not their imagination. A Chula lecturer has given recommendations to parents who need to spend more time at home on select social activities to enhance children’s development in a safe and age-appropriate way.

Amid the new surge of COVID-19 cases across the U.S., the American Society of Anesthesiologists (ASA), and eight professional societies associated with the specialty, are strongly encouraging the nation’s health care workers and all eligible Americans to get fully vaccinated with one of the COVID-19 vaccines. ASA and the associated societies remind the public that widespread vaccination is the most effective way to reduce illness and death.

Which Voices Led Medical Misinformation in the Early Stages of COVID?

In the early and thus far most devastating stages of the COVID-19 pandemic, scientists were at a near loss on how to treat the deadly disease.

Half of U.S. Parents May Not Vaccinate Their Youngest Child Against COVID-19

Even as the delta variant of Covid-19 sweeps the globe, leaving those who remain unvaccinated vulnerable, vaccination among adults and teenagers in the United States is stalling, giving rise to concerns over whether parents will vaccinate their young children once vaccines are approved for those under 12 years of age.

The Federation of State Medical Boards’ Board of Directors released statement in response to a dramatic increase in the dissemination of COVID-19 vaccine misinformation and disinformation by physicians and other health care professionals on social media platforms, online and in the media.

Charles M. “Chick” Macal, a modeling and simulation expert at Argonne, garnered the distinguished title of Fellow of the Society for Computer Simulation International for his 20 years in the field and his recent studies on COVID-19 spread.