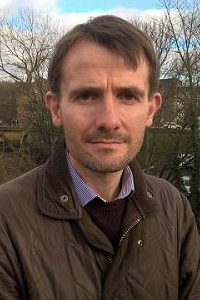 The Black Death looms large in the history of infectious disease.

The pandemic — an outbreak of bubonic plague which was probably spread predominantly by rats and fleas — struck Italy in 1347. Recent evidence on mortality suggests that in just a few years, the disease killed around 60 percent of the population in Europe, the part of the world from which historians have the most information.

As the world deals with the outbreak of COVID-19, Florida State University Associate Professor of History Ben Dodds, a specialist in medieval England as well the Black Death, discussed life in the 14th century and lessons we can take from that moment in time. He can be reached at [email protected].

What was life like when the Black Death was spreading?

The media and the accessibility of information were very different in the Middle Ages compared to our time. Mass communication in the modern sense did not exist, but information spread quickly by word of mouth. As the plague spread northward through Europe, communities knew what was coming because they had heard reports from places already affected. The period of waiting for the plague to arrive was one of terrible fear and anticipation.

It’s difficult to know what it was actually like when the plague arrived because the sources we have are descriptions written after the fact, although some of the people who wrote them were eyewitnesses. People in the Middle Ages thought that plague was a punishment from God, so they often described what they considered sinful behavior including, for example, the abandonment of children by their parents. We need to be careful in accepting these accounts as realistic.

One thing that does emerge very clearly from eyewitness accounts of the Black Death is that people responded in different ways to the crisis. Some people just lived for the day, enjoying what they knew might be their final days, going out and drinking too much and spending the time with their friends. Other people responded by turning to God and attending mass gatherings for prayer. Others tried to isolate themselves. Many people who had the means to do so tried to flee.

How did people try to stop the spread of the disease? Were there any public health measures?
There were some. Doctors claimed that they were able to minimize the risk of infection. Sets of recommendations survive in which people were advised to behave in certain ways, to eat certain foods, to avoid other foods or particular activities. In terms of public health, there was much less that the authorities could do about the Black Death than present-day governments can do about epidemic disease. This is partly because of the very limited understanding of the nature of the Black Death but also because governments had much fewer resources in medieval Europe than they do today. Without police forces, standing armies, large state bureaucracies and so on, there was much less governments could do to control people’s behavior, even if they thought such control desirable. One major problem communities faced was the burial of the dead, and dealing with this problem was left to religious authorities. In recent years, archaeologists have found more and more evidence of the burial of Black Death victims in mass graves in the towns and countryside. These sites are vivid reminders today of the awful human impact of the Black Death.

Public measures to prevent the spread of plague were very limited. There were sanitary regulations in many cities, and a few Italian cities did attempt to restrict people’s movement in the hope of limiting the spread of the plague, but this was rare. Many communities were helpless in the face of such devastating and rapid mortality.

The Black Death was only the first of a long series of plague outbreaks which affected Europe and parts of Asia from the late 14th century until the 18th century. This devastating wave of plague is now known as the Second Pandemic. And as the Second Pandemic went on, public health measures become much more widespread and more effective. By the 16th and 17th centuries, it was much more common for authorities throughout Europe to restrict movement and to implement quarantining procedures in times of plague.

So, during the Second Pandemic, they were doing a sort of social distancing?
Yes, that’s exactly what they were doing. The grim experience of plague meant that people understood that the best way of preventing the spread of the disease was to prevent human contact with people suffering from it, and these measures became much more widespread. Even at the time of the Black Death, people knew that those who buried the dead were exposed to exceptional risk. By the 17th century, we have famous stories of whole villages that cut themselves off to prevent the spread of plague.

Was it easy for them to avoid other people? They didn’t have some of the tools we have, like online grocery or food delivery, for example.
This must have depended on individual circumstances. If you were living in a big Italian city or in London or Paris, it must have been very difficult to avoid human contact because, as you say, there was obviously no online ordering and door-to-door delivery of goods, produce and so on. Equally, though, the flip side of this is that most people in medieval Europe were small farmers living in the countryside. And unlike almost everyone now in a modern-day, wealthy country, most medieval people produced a lot of their own food. However horrific and awful the emotional trauma of losing friends and family members must have been, medieval people could carry on with what they normally did in a way that’s very difficult for us to imagine. We’re so dependent on complex infrastructures for power, food, transport and so on. If you lived in a medieval village where you produced much of your own food, then keeping going even during a very major crisis indeed was much more feasible than it would be today.

Are there any lessons from that time period we should revisit now as we are dealing with COVID-19?
The coronavirus is not a new Black Death: Yes, it spreads frighteningly quickly, but mortality rates are far lower than they were in the late 1340s. Even so, I think there are some lessons we can learn from the 14th-century experience.

The Black Death was a new disease that spread terrifyingly fast and with devastating consequences. Contemporaries tried to explain what was happening, but they did not have the understanding or the technology to prevent or cure the disease. We have a much clearer scientific understanding of the coronavirus than contemporaries did of the disease that caused the Black Death. Nevertheless, we do not yet have medical means to prevent or cure the disease. The Black Death – and the subsequent outbreaks of plague during the Second Pandemic – teach us that the most important thing is to act very swiftly to keep people away from each other. The more effectively people are isolated from those infected, then the fewer people are affected overall. People began to understand this even at the time of the Black Death. By the time plague reappeared in the 16th and 17th centuries, they were quick to implement these measures each time there was an outbreak.

The other warning that the Middle Ages has for us concerns the temptation to apportion blame and the violence which can result. When people are scared of something unknown, it’s tempting to look to a very simple solution and say ‘Oh, this disease is the fault of this particular group, so if we deal with that particular group, we’ll all be safe.’ At the time of the Black Death, many thousands of Jewish people were brutally murdered in European cities because some people thought that they were responsible for the epidemic. Sometimes this violence was carried out by terrified mobs. Sometimes it was directed by governments who were afraid of disorder and wanted to be seen to be doing something during the crisis. As we face the challenge of the coronavirus, we must make sure this kind of blaming and the violence that results are avoided. Governments need to work together globally and not give in to the easy temptation to blame others. All of us as individuals need to be careful that our anxiety is not directed toward others. Instead, we must come together as a global community to face the crisis and minimize its impact.

A new study’s findings dispel the misconception that patients and providers are at high risk of catching COVID-19 at the dentist’s office.

Lung Damage Not the Culprit for Post-COVID Exercise Limitations

A new study suggests the lungs may not be the main factor that reduce exercise ability in people recovering from severe COVID-19. Anemia and muscle dysfunction also play a role. The study is published ahead of print in the Journal of Applied Physiology. It was chosen as an APSselect article for May.