How much time and money do commuters save working from home?

Newswise — Commuters could save an average of 90 hours (or two-and-a-half working weeks) each year if work from home continues at current rates, according to preliminary findings of a University of Sydney survey.

Researchers from the Institute of Transport & Logistics Studies (ITLS) at the University of Sydney Business School conducted the national survey between March and October last year with 956 respondents.

“Our survey shows that work from home policies have been the greatest transport policy lever in the last 70 years. It has helped deliver greater travel time savings than any other infrastructure of transport demand initiative,” Professor David Hensher, Director of ITLS and a leading transport economist, said.

The ITLS study calculated the potential cost savings for commuters working in the Greater Sydney Metropolitan Area, using average fare prices for public transport and toll and operating costs for car trips. Each commuter could save $906 in out-of-pocket expenses, and a further $2643 in travel time savings.

The research team’s projections show that Australians from metropolitan areas could save 143 minutes a week compared to those from regional areas who could have 81 minutes cut from commuting.

“These time savings can be invested into activities that give an individual more value; be it spending more time with family or doing an extra bit of work which benefits business,” co-author Associate Professor Matthew Beck said. 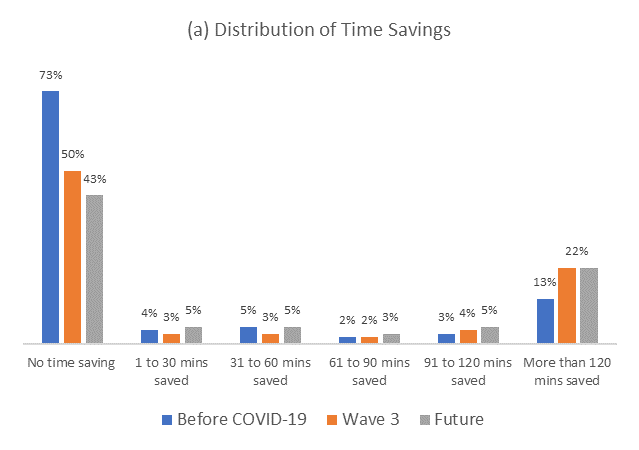 Above: Weekly time savings by not commuting. Data was collected between 4 August and 10 October.

How commuting activity changed through COVID

The researchers collected the data in three waves, the first being immediately after National Cabinet’s decision to shut international borders almost one year ago. The number of commuting trips plummeted by more than half in the first wave.

While restrictions eased across most states and the number of commuter trips rose, Victoria’s second wave of COVID-19 resulted in tighter restrictions and commuting level fell by 54 percent compared to pre-pandemic levels.

Above: Commuting activity by mode. Wave 1 is March-April, Wave 2 is May-June and Wave 3 is August-October.

“Despite the significant efforts of government to move away from its initial messaging to not use public transport, some commuters are still concerned about bio-security risks,” Professor Hensher said.

“Encouraging and enabling work from home as restrictions ease is a viable and cost-effective measure for transport authorities to ease crowding during peak travel times.”

When the researchers asked about future intentions, most of the survey respondents said they would prefer to work from home at least one day per week.

“The future desires to work from home have been remarkably consistent since July last year, matching the current levels of working from home,” Associate Professor Beck said.

“This means that on any given weekday there would be up to 30 percent of people working from home, which would result in significantly less congestion on roads and crowding on public transport.”

ITLS received funding from iMove Cooperative Research Centre, Transport for NSW and WA Department of Transport to conduct this research.