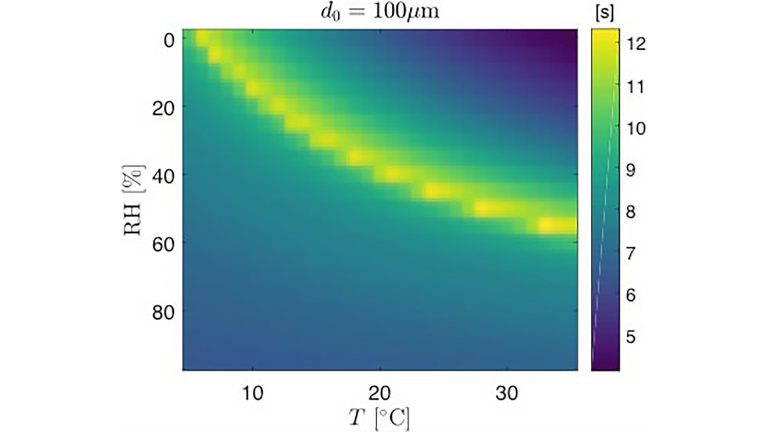 Color map showing the amount of time a free-falling 100-micron droplet at an initial height of 1.6 meters is affected by temperature and humidity. For relative humidities (RH) and temperatures (T) below the yellow arc, the droplet will fall to the ground in the number of seconds indicated by the color scale; above the arc, the droplet will completely evaporate in air, never reaching the ground.

Newswise — WASHINGTON, August 18, 2020 -- The novel coronavirus that causes COVID-19 is thought to spread through natural respiratory activities, such as breathing, talking and coughing, but little is known about how the virus is transported through the air.

University of Missouri scientists report, in Physics of Fluids, by AIP Publishing, on a study of how airflow and fluid flow affect exhaled droplets that can contain the virus. Their model includes a more accurate description of air turbulence that affects an exhaled droplet’s trajectory.

Calculations with their model reveal, among other things, an important and surprising effect of humid air. The results show high humidity can extend the airborne lifetime of medium-sized droplets by as much as 23 times.

Droplets exhaled in normal human breath come in a range of sizes, from about one-tenth of a micron to 1,000 microns. For comparison, a human hair has a diameter of about 70 microns, while a typical coronavirus particle is less than one-tenth of a micron. The most common exhaled droplets are about 50 to 100 microns in diameter.

The droplets exhaled by an infectious individual contain virus particles as well as other substances, such as water, lipids, proteins and salt. The research considered not just transport of droplets through the air but also their interaction with the surrounding environment, particularly through evaporation.

The investigators used an improved description of air turbulence to account for natural fluctuations in air currents around the ejected droplet. They were able to compare their results to other modeling studies and to experimental data on particles similar in size to exhaled droplets. The model showed good agreement with data for corn pollen, which has a diameter of 87 microns, approximately the same size as most of the exhaled droplets.

Humidity affects the fate of exhaled droplets, since dry air can accelerate natural evaporation. In air with 100% relative humidity, the simulations show larger droplets that are 100 microns in diameter fall to the ground approximately 6 feet from the source of exhalation. Smaller droplets of 50 microns in diameter can travel further, as much as 5 meters, or about 16 feet, in very humid air.

Less humid air can slow the spread. At a relative humidity of 50%, none of the 50-micron droplets traveled beyond 3.5 meters.

The investigators also looked at a pulsating jet model to mimic coughing.

“If the virus load associated with the droplets is proportional to the volume, almost 70% of the virus would be deposited on the ground during a cough,” said author Binbin Wang. “Maintaining physical distance would significantly remediate the spread of this disease through reducing deposition of droplets onto people and through reducing the probability of inhalation of aerosols near the infectious source.”