New detect-and-disinfect technology to be developed, tested at the University of North Dakota 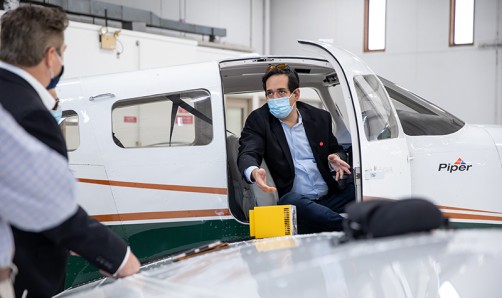 Fartash Vasefi, chief technology officer at SafetySpect, talks to others from the cockpit of a UND aircraft during a demonstration of SafetySpect’s technology. 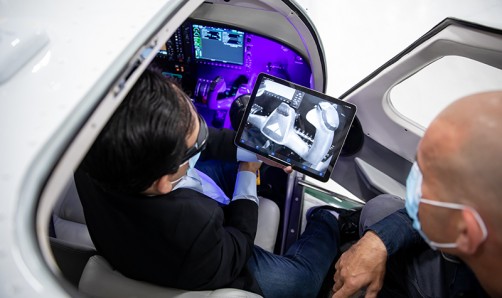 The SafetySpect scanner uses ultraviolet light to detect an enzyme in human saliva, making the saliva show up as white spots under the scanner’s glow. In this Sept. 1 photo, Fartash Vasefi (left), SafetySpect’s chief technology officer, and UND Associate Professor Joe Vacek test the system in the cockpit of a UND aircraft. Kneeling in the cockpit of a UND aircraft, Joe Vacek, associate professor of aviation at UND, shines SafetySpect’s handheld contamination detection-and-disinfection light while checking the results on a tablet. The SafetySpect system uses capabilities beyond human vision to detect contamination on and then disinfect surfaces.

Newswise — What if, when confronted with a COVID-contaminated countertop, cockpit or control panel, a person could decontaminate the entire surface by zapping it with a handheld ultraviolet light?

Technology that UND is testing and helping to develop could make it possible for people to do just that. And if the testing is successful, the U.S. Air Force and the global food-services industry are just two of the industrial behemoths that are likely to be interested.

Supported by a $1.5 million grant from the North Dakota Department of Agriculture, SafetySpect Inc. – a California-based company – is bringing its virus-fighting solution to multiple UND labs for experimentation.

And – upon setting up shop in the UND Center for Innovation – they’re aiming to establish a Midwest footprint.

By the end of the calendar year, SafetySpect’s goal is to have dozens of prototype UV light scanner/disinfection systems, manufactured in North Dakota, ready for use in the field.

On Sept. 1, leaders of SafetySpect met with Joe Vacek, associate professor of aviation, at UND Flight Operations for a brief demonstration. And over the course of the fall semester, the SafetySpect system will be tested in UND labs, where researchers will “contaminate” various materials and then assess the light’s safety and effectiveness at decontaminating them.

Sitting in the cockpit, SafetySpect president and CEO Kenneth Barton aimed a handheld spotlight emitting a deep glow, reminiscent of a black light. Nearby, a tablet showed a live feed of the spotlight’s target: the control panel of a UND Piper Archer aircraft.

“We’re using the Contamination and Sanitation Inspection and Disinfection (CSI-D) tool to identify respiratory droplets on sensitive airplane equipment that you cannot traditionally just spray down with disinfectant,” Barton explained.

Continuing to aim the device, Barton swept across high-touch areas such as the yoke of the craft. On the tablet display, SafetySpect’s optical imaging technology highlighted saliva enzymes as bright white spots.

The UVC LEDs that “brightened” the enzymes can also render virus-carrying droplets inert with a strong, brief exposure. The entire process is recorded and captured on the tablet.

“After that, a sanitation crew can get rid of the respiratory droplets in a safe manner, because any virus would have been effectively neutralized by the UVC,” Barton said.

Following another scan, the bright white spots were gone. “And there has been no cross contamination by any viral issues,” Barton concluded.

SafetySpect’s CSI-D tool was designed originally for the food industry, for use in restaurants and other institutional kitchens. The tool’s early models targeted various biologics that can trigger food poisoning and other ailments. The federal government recognizes the value of that work; so, since 2019, the company has been working with the USDA to improve the CSI-D tool for commercialization.

“Then when COVID hit, we realized there is an enzyme in human respiratory droplets and saliva,” Barton said. “So, we adapted the device to scan for that.”

As demonstrated in the Piper Archer cockpit, the device uses UVC light to identify a contaminant, then an operator can crank up the UVC to essentially kill the virus. This use of UVC isn’t novel, but SafetySpect’s pairing of a tablet device to tune its visual output, as well as record the sanitation process, can create better record-keeping and more accountability in matters of public health.

“All of the process will be recorded, time-stamped, dated and location-stamped in a digital record in the cloud,” said Fartash Vasefi, chief technology officer at SafetySpect. “Other UV systems offer only the disinfection. They don’t have the imaging and documentation to go with it.”

Vasefi described where the University of North Dakota fits into the picture with SafetySpect’s product development.

“The safety is key,” Vasefi said.

In the lab at the College of Engineering & Mines run by Kouhyar Tavakolian, associate professor, director of the biomedical engineering program and principal investigator on the SafetySpect project, researchers will shine the SafetySpect device on a number of surfaces. Among the surfaces will be samples of the plastics, metals, digital screens and upholstery typically found in airplane cockpits.

While an operator conducts the scan, sensors will be placed on the operator’s body in order to detect the intensity of back-reflected UV light. Tavakolian’s team will study the results to gauge how much personal protection equipment will be needed for safe operation.

“All of this development has to be tied into experiments and validation, and that’s what’s happening at UND,” Vasefi said.

The airline industry, ravaged as it has been by the coronavirus pandemic, has become increasingly interested in SafetySpect’s technology, according to the project leads. What better place to test the technology on aircraft than the nation’s top flight school?

Tavakolian wants to create a space where he and his team can show the repeatability of the device’s saliva detection abilities. He is also working with virologist Nadeem Khan at the School of Medicine & Health Sciences to understand how intense the UV light needs to be, and how long is needed for appropriate exposure, to disable viruses. COVID-19 cannot be used in testing on campus, but other pathogens can be tested at the School of Medicine & Health Sciences.

“We think that, in the future, this could be useful for any pathogen that can be transmitted through respiratory droplets,” Tavakolian said. “Remember, even if a vaccine comes, the coronavirus is not going to vanish overnight. Once we have a unit such as the CSI-D tool, we can always improve its accuracy and its size, and we also can always improve on the safety of it.”

With an established presence at UND, SafetySpect is also working with manufacturer ComDel Innovation in Wahpeton, N.D., to produce the shells for the UVC spotlights/camera prototypes and assemble the finished products.

“We’re focused on increasing these types of partnerships in order to move our research and development forward, have an impact and bring new industry partners to the state,” Mihelich said.

Tavakolian is keen on seeing whether the product can help with the COVID-19 situation affecting everyday life around UND and communities across the country.

“You can have it in schools, restaurants, airplanes and the like, so we should be able to get some user response,” Tavakolian said. “Hopefully that will help the company and the whole idea to go forward quickly. 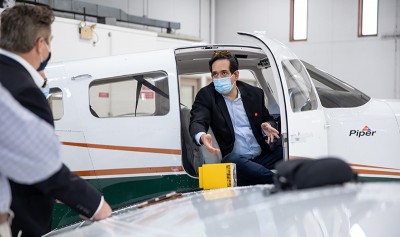 Caption: Fartash Vasefi, chief technology officer at SafetySpect, talks to others from the cockpit of a UND aircraft during a demonstration of SafetySpect’s technology. 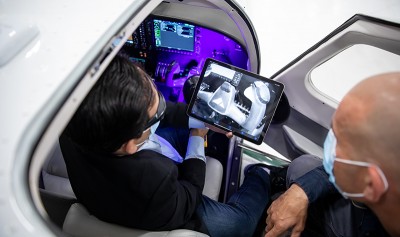 Caption: The SafetySpect scanner uses ultraviolet light to detect an enzyme in human saliva, making the saliva show up as white spots under the scanner’s glow. In this Sept. 1 photo, Fartash Vasefi (left), SafetySpect’s chief technology officer, and UND Associate Professor Joe Vacek test the system in the cockpit of a UND aircraft.

Caption: Kneeling in the cockpit of a UND aircraft, Joe Vacek, associate professor of aviation at UND, shines SafetySpect’s handheld contamination detection-and-disinfection light while checking the results on a tablet. The SafetySpect system uses capabilities beyond human vision to detect contamination on and then disinfect surfaces.