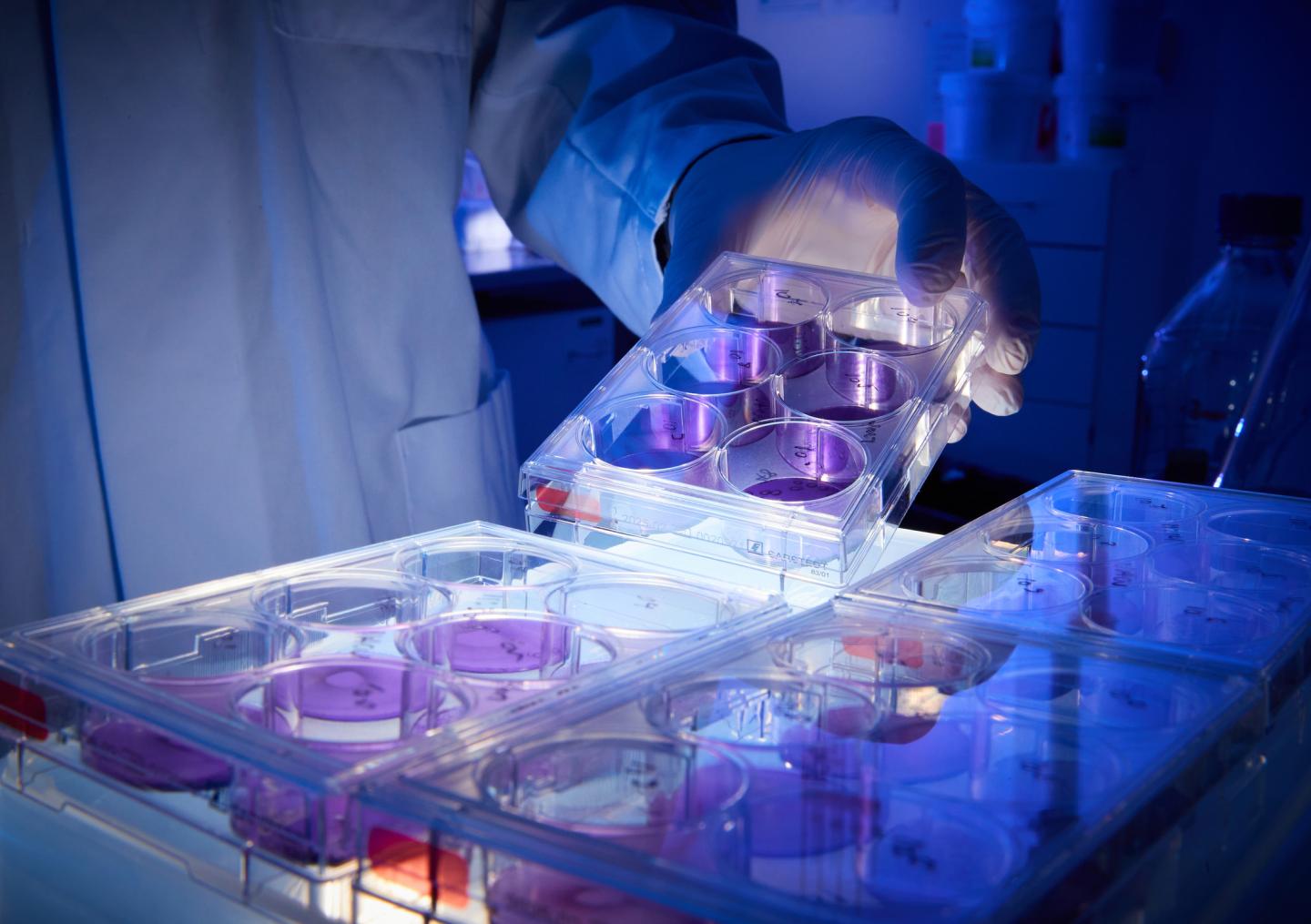 Cell culture plates with stained cells, in which virus replication can be quantified by the ‚holes' that virus infection causes in the cell lawn. 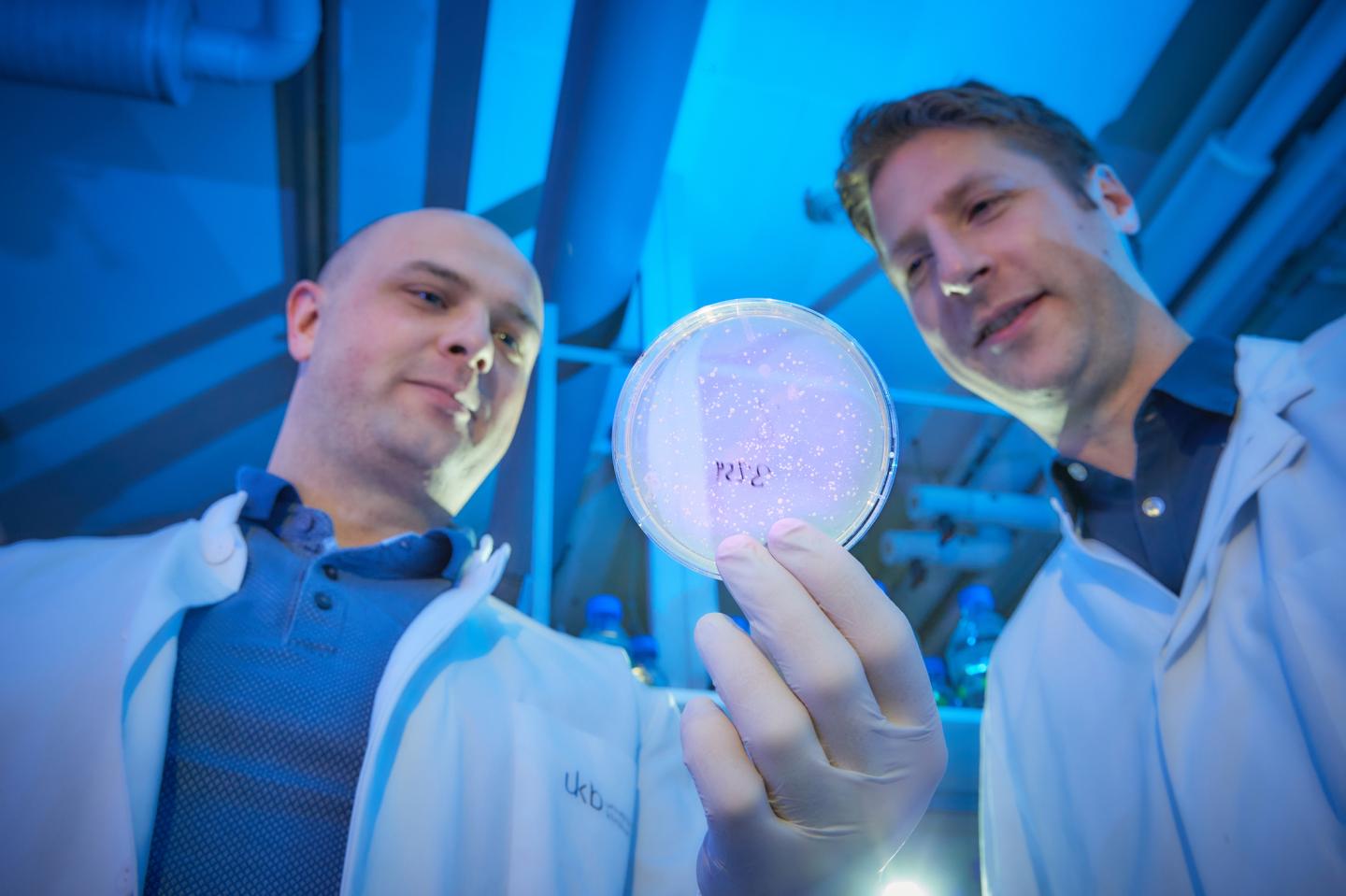 Dr Paul-Albert König (left) from the Core Facility Nanobodies and Dr Florian I. Schmidt from the Institute of Innate Immunity at the University of Bonn with cell culture in the lab. 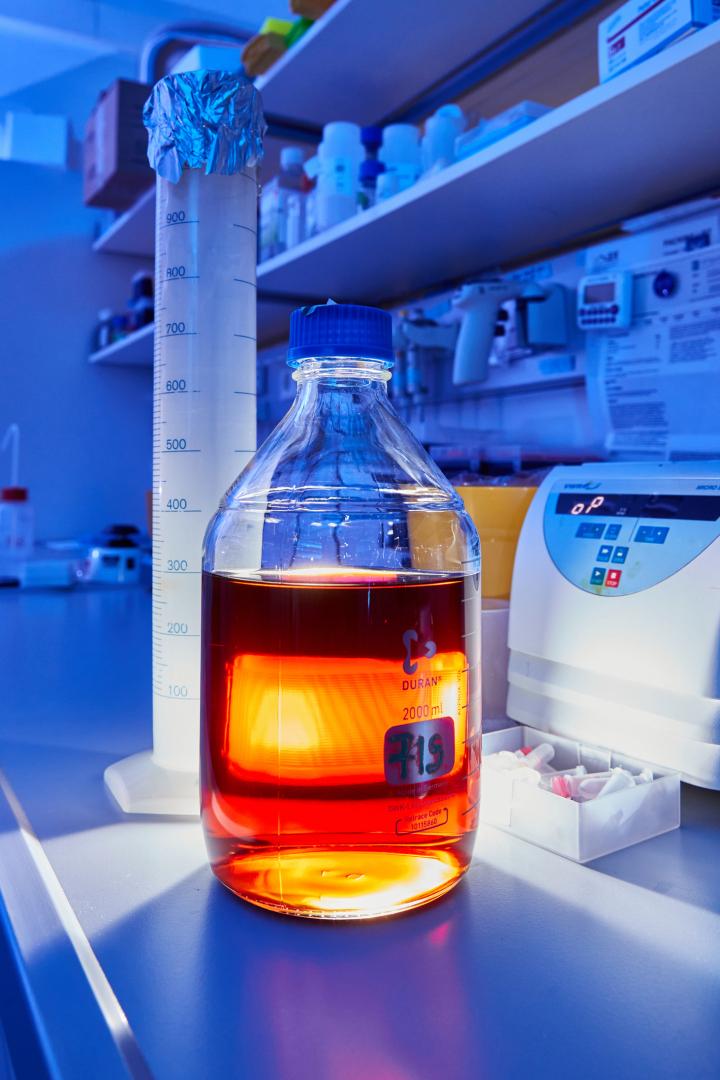 Bottle with liquid medium for bacteria, which are used in this study to recombinantly produce nanobodies

Newswise — Antibodies are an important weapon in the immune system's defense against infections. They bind to the surface structures of bacteria or viruses and prevent their replication. One strategy in the fight against disease is therefore to produce effective antibodies in large quantities and inject them into the patients. The outgoing US President Donald Trump probably owes his rapid recovery to this method. However, the antibodies used to treat him have a complex structure, do not penetrate very deeply into the tissue and may cause unwanted complications. Moreover, producing antibodies is difficult and time-consuming. They are therefore probably not suitable for widespread use.

Mass production in yeast or bacteria

"We focus on another group of molecules, the nanobodies," explains Dr. Florian Schmidt, who heads an Emmy Noether group on this promising new field of research at the University of Bonn's Institute of Innate Immunity. "Nanobodies are antibody fragments that are so simple that they can be produced by bacteria or yeast, which is less expensive."

However, the immune system produces an almost infinite number of different antibodies, and they all recognize different target structures. Only very few of them are for example capable of defeating the SARS coronavirus-2. Finding these antibodies is like searching for a single grain of sand on Germany's Baltic coast. "We first injected a surface protein of the coronavirus into an alpaca and a llama," Schmidt explains. "Their immune system then produces mainly antibodies directed against this virus. In addition to complex normal antibodies, llamas and alpacas also produce a simpler antibody variant that can serve as the basis for nanobodies."

A few weeks later, the researchers took a blood sample from the animals, from which they extracted the genetic information of produced antibodies. This "library" still contained millions of different construction plans. In a complex process, they extracted those that recognize an important structure on the surface of the coronavirus, the spike protein. "Altogether we obtained dozens of nanobodies, which we then analyzed further," explains Dr. Paul-Albert König, head of the Core Facility Nanobodies at the Medical Faculty of the University of Bonn and lead author of the study.

Four out of several million

Four molecules actually proved to be effective against the pathogen in cell cultures. "Using X-ray structures and electron microscopy analyses, we were furthermore able to show how they interact with the spike protein of the virus," explains König. This work was done in the research groups around Martin Hällberg (Karolinska Institutet, Sweden) and Nicholas Wu as well as Ian Wilson (Scripps Research Institute, USA). The spike protein is crucial for the infection: It acts like a velcro fastener with which the pathogen attaches to the attacked cell. Next, the velcro changes its structure: It discards the component that is important for attachment and mediates fusion of the virus envelope with the cell. "Nanobodies also appear to trigger this structural change before the virus encounters its target cell - an unexpected and novel mode of action," says König. "The change is likely to be irreversible; the virus is therefore no longer able to bind to host cells and infect them."

The researchers also exploit another major advantage of nanobodies over antibodies: Their simple structure allows straight forward combinations to form molecules that can be several hundred times more effective. "We have fused two nanobodies that target different parts of the spike protein," explains König. "This variant was highly effective in cell culture. Furthermore, we were able to show that this drastically reduces the probability of the virus to become resistant to the active agent through escape mutations." The researchers are convinced that the molecules may be developed into a novel and promising therapeutic option.

Institutions from Germany, Sweden and the USA were involved in the study. Diffraction data were collected at Stanford Synchrotron Radiation Lightsource (SSRL) and at the Advanced Photon Source (APS) at Argonne National Labs in the USA.

In Germany, the study was financially supported by the Medical Faculty of the University of Bonn, the German Research Foundation, the Klaus Tschira Boost Funds, the Federal Ministry of Education and Research, the Baden-Württemberg Foundation and the MWK Baden-Württemberg. In the USA, the Bill and Melinda Gates Foundation, the U.S. Department of Energy, the National Institutes of Health (NIH), the National Institute of General Medical Sciences (NIGMS) and the National Cancer Institute (NCI) funded the project, in Sweden the Swedish Research Council and the Knut and Alice Wallenberg Foundation.

The founders of the company Dioscure were supported by the enaCom Transfer Center at the University of Bonn providing a link between research and industry with its offers. As University of Bonn's IP Service Provider, PROvendis GmbH negotiates the commercialization contract with Dioscure.

Caption: Cell culture plates with stained cells, in which virus replication can be quantified by the ‚holes' that virus infection causes in the cell lawn.

Caption: Dr Paul-Albert König (left) from the Core Facility Nanobodies and Dr Florian I. Schmidt from the Institute of Innate Immunity at the University of Bonn with cell culture in the lab.

Caption: Bottle with liquid medium for bacteria, which are used in this study to recombinantly produce nanobodies