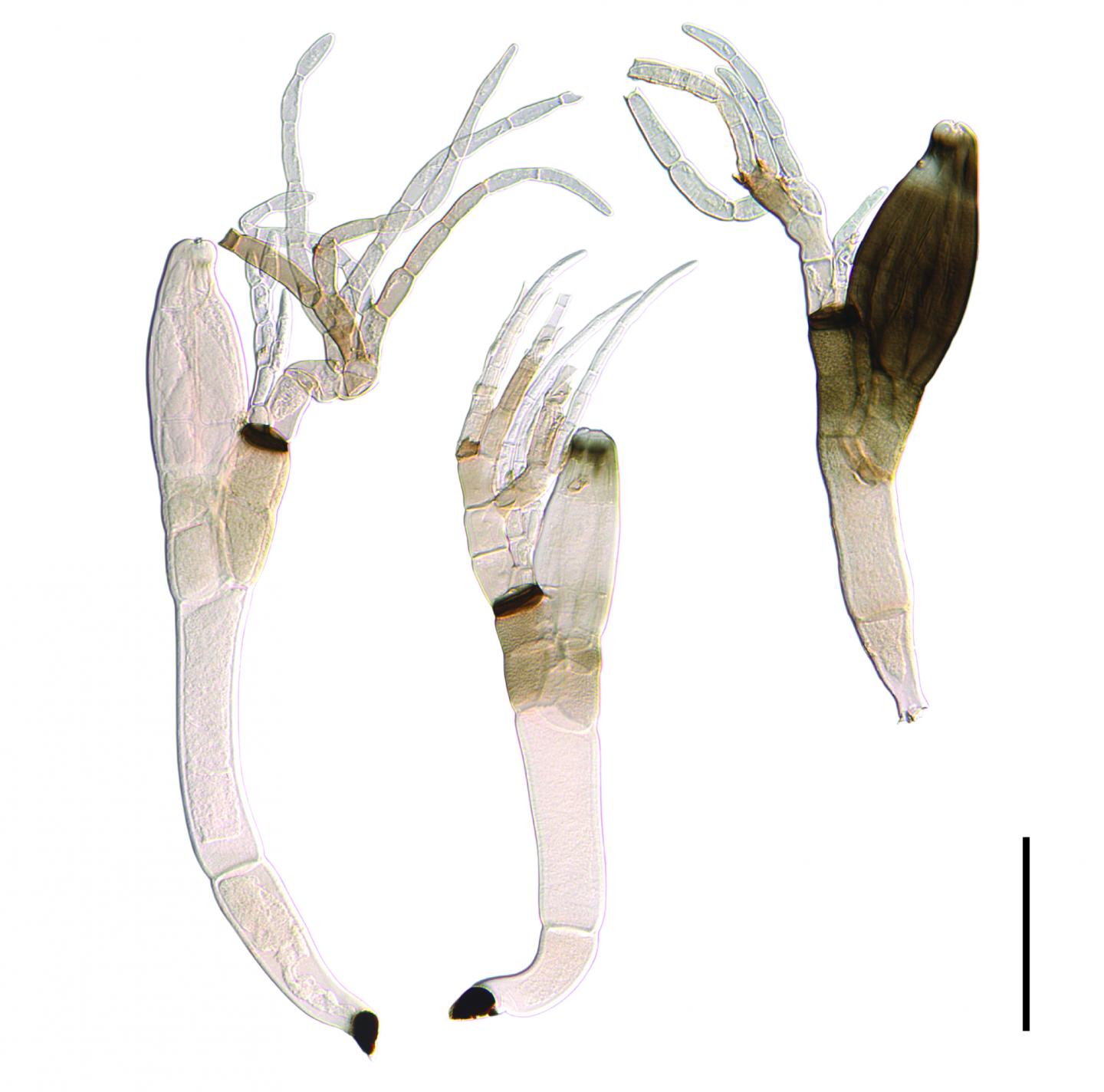 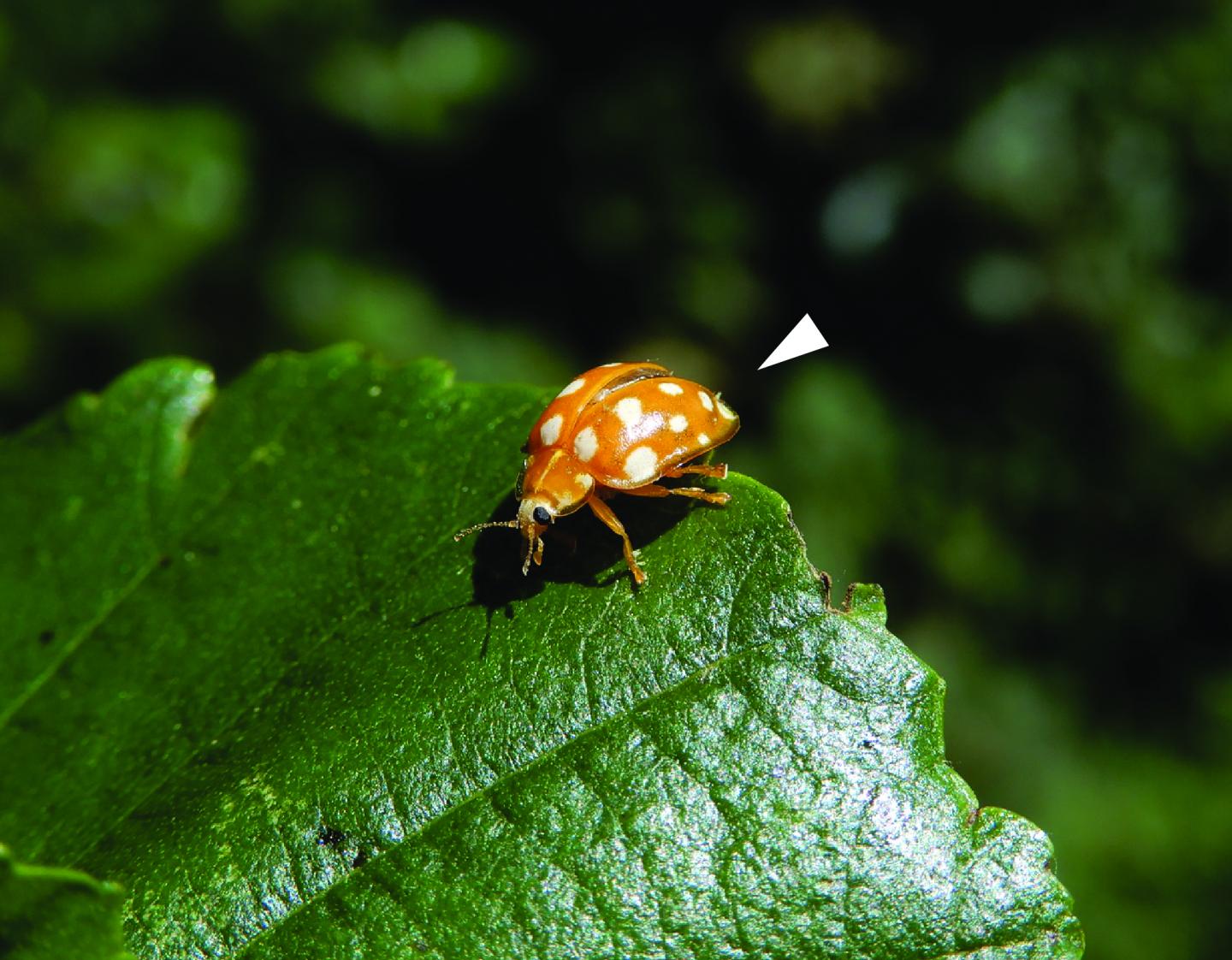 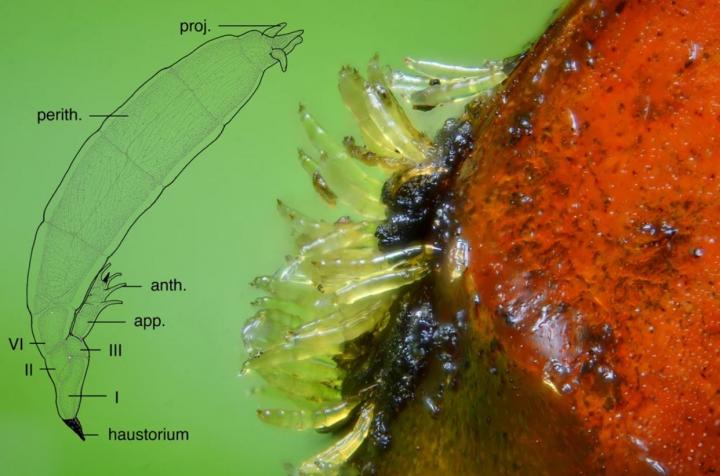 Extreme close-up of the thalli of a fungus in the genus Hesperomyces (H. virescens sensu lato) parasitizing a harlequin ladybird (Harmonia axyridis).

Extreme close-up of the thalli of a fungus in the genus Hesperomyces (H. virescens sensu lato) parasitizing a harlequin ladybird (Harmonia axyridis).

Newswise — A major comprehensive study on Herpomycetales and Laboulbeniales, two orders of unique ectoparasitic fungi associated with insects and other arthropods (class Laboulbeniomycetes) in Belgium and the Netherlands was published in the open-access, peer-reviewed scholarly journal MycoKeys.

Having surveyed arthropod fauna using pitfall traps and an illuminated white screen at night, and with the help of a network of entomologists, Dr. Danny Haelewaters (Purdue University, University of South Bohemia and Ghent University) and Dr. André De Kesel (Botanic Garden Meise) provide identification details about a total of 140 fungal species. The list includes nine species that are reported for the first time for either of the two countries and two newly described species.

Interestingly, one of the novel fungi was described during the 2020 global quarantine period, imposed to curb the COVID-19 pandemic. This prompted the researchers to dedicate the newly discovered species to this extraordinary time. In the annals of science, the species will be going by the name of Laboulbenia quarantenae.

Laboulbenia quarantenae grows externally on the body of ground beetles belonging to the species Bembidion biguttatum and is thus far only found at the Botanic Garden Meise in Belgium. This new fungus is considered to be very rare compared to Laboulbenia vulgaris, another, well-documented species that is more commonly found on the same host. So far, there has been no evidence that L. quarantenae parasitizes other host species.

Herpomycetales and Laboulbeniales--unlike common mushrooms--do not form branching thread-like hyphae, nor a mycelium. Rather, they grow a single three-dimensional thallus of a few thousand cells sticking out of the body of the host organism. While some species of Laboulbeniales, like Laboulbenia quarantenae, are superficially attached to their host, others are more invasive, such as Hesperomyces halyziae, the second fungus newly described in this study. These fungi produce a haustorium, which is a hyphal outgrowth used to penetrate the tissues of their arthropod hosts, so that they can reach to the primary body cavity and the circulatory fluid in there. By doing so, it is thought that the parasites can both increase surface area for nutrient uptake and tighten their grip on their host.

In their study, the scientists hypothesize that, because of their invasive nature, these haustorial parasites maintain close interactions with their hosts in a process referred to as an "evolutionary arms race". This means that whenever the host evolves a defence mechanism against the fungus, the parasite promptly evolves in its own turn, and adapts accordingly. Eventually, specialization leads to the evolution of new species.

The present study compiles all available data from Belgium and the Netherlands and serves as an appropriate starting point for an updated checklist of thallus-forming fungi in the class Laboulbeniomycetes found across Europe. Such a checklist is an ongoing project meant to summarize decades of research and will undoubtedly continue to uncover significant fungal diversity. The last update of this piece of knowledge dates back to 1991.

Credit: Extreme close-up of the thalli of a fungus in the genus Hesperomyces (H. virescens sensu lato) parasitizing a harlequin ladybird (Harmonia axyridis).

Caption: Extreme close-up of the thalli of a fungus in the genus Hesperomyces (H. virescens sensu lato) parasitizing a harlequin ladybird (Harmonia axyridis).