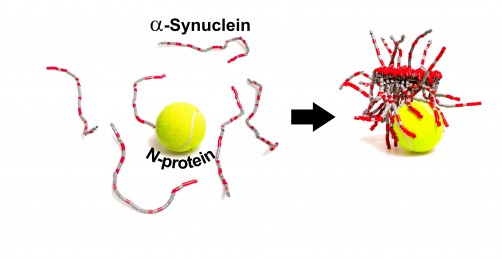 The SARS-CoV-2 N-protein can interact with α-synuclein in the test tube and help it form amyloid fibrils, a hallmark of Parkinson’s disease.

Newswise — Case reports of relatively young COVID-19 patients who developed Parkinson’s disease within weeks of contracting the virus have led scientists to wonder if there could be a link between the two conditions. Now, researchers reporting in ACS Chemical Neuroscience have shown that, at least in the test tube, the SARS-CoV-2 N-protein interacts with a neuronal protein called α-synuclein and speeds the formation of amyloid fibrils, pathological protein bundles that have been implicated in Parkinson’s disease.

In addition to respiratory symptoms, SARS-CoV-2 can cause neurological problems, such as loss of smell, headaches and “brain fog.” However, whether these symptoms are caused by the virus entering the brain, or whether the symptoms are instead caused by chemical signals released in the brain by the immune system in response to the virus, is still controversial. In Parkinson’s disease, a protein called α-synuclein forms abnormal amyloid fibrils, leading to the death of dopamine-producing neurons in the brain. Interestingly, loss of smell is a common premotor symptom in Parkinson’s disease. This fact, as well as case reports of Parkinson’s in COVID-19 patients, made Christian Blum, Mireille Claessens and colleagues wonder whether protein components of SARS-CoV-2 could trigger the aggregation of α-synuclein into amyloid. They chose to study the two most abundant proteins of the virus: the spike (S-) protein that helps SARS-CoV-2 enter cells, and the nucleocapsid (N-) protein that encapsulates the RNA genome inside the virus.

In test tube experiments, the researchers used a fluorescent probe that binds amyloid fibrils to show that, in the absence of the coronavirus proteins, α-synuclein required more than 240 hours to aggregate into fibrils. Adding the S-protein had no effect, but the N-protein decreased the aggregation time to less than 24 hours. In other experiments, the team showed that the N- and α-synuclein proteins interact directly, in part through their opposite electrostatic charges, with at least 3–4 copies of α-synuclein bound to each N-protein. Next, the researchers injected N-protein and fluorescently labeled α-synuclein into a cell model of Parkinson’s disease, using a similar concentration of N-protein as would be expected inside a SARS-CoV-2-infected cell. Compared to control cells with only α-synuclein injected, about twice as many cells died upon injection of both proteins. Also, the distribution of α-synuclein was altered in cells co-injected with both proteins, and elongated structures were observed, although the researchers could not confirm that they were amyloid. It’s unknown whether these interactions also occur within neurons of the human brain, but if so, they could help explain the possible link between COVID-19 infection and Parkinson’s disease, the researchers say.

The abstract that accompanies this paper is available at https://pubs.acs.org/abs/doi/10.1021/acschemneuro.1c00666.