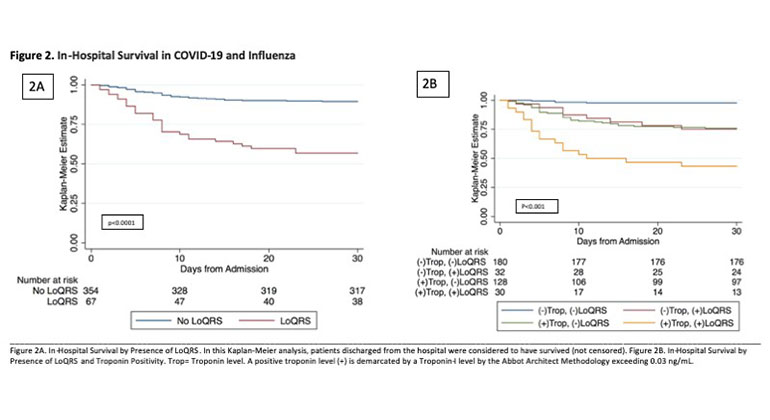 Newswise — (New York, NY, September 24, 2021) – Specific and dynamic changes on electrocardiograms (EKGs) of hospitalized patients with COVID-19 or influenza can help predict a timeframe for worsening health and death, according to a new Mount Sinai study. The work, published in the September 24 online issue of the American Journal of Cardiology, shows that shrinking waveforms on these tests can be used to help better identify high-risk patients and provide them more aggressive monitoring and treatment.

“Our study shows diminished waveforms on EKGs over the course of COVID-19 illness can be an important tool for health care workers caring for these patients, allowing them to catch rapid clinical changes over their hospital stay and intervene more quickly. With COVID-19 cases and hospitalizations continuing to rise again, EKGs may be helpful for hospitals to use when caring for these patients before their condition gets dramatically worse,” says senior author Joshua Lampert, MD, Cardiac Electrophysiology fellow at The Mount Sinai Hospital. “This is particularly useful in overwhelmed systems, as there is no wait for blood work to return and this test can be performed by the majority of health care personnel. Additionally, the EKG can be done at the time of other bedside patient care, eliminating the potential exposure of another health care worker to COVID-19.”

An EKG is a noninvasive test that records the electrical activity of the heart. It is widely used for diagnosing cardiovascular disease and arrhythmia, or abnormal heart rhythm. Small patches called electrodes are placed on the arms, legs, and chest, and connected by wires to a machine that turns the heart’s electrical signals into wavy lines.

Researchers did a retrospective analysis of EKGs on 140 patients hospitalized with COVID-19 across the Mount Sinai Health System in New York City between March 7 and April 12, 2020, and compared them with 281 EKGs from patients with laboratory-confirmed influenza A or influenza B admitted to The Mount Sinai Hospital between January 2, 2017, and January 5, 2020.

The researchers looked at three EKG time points for each patient: a baseline scan done within a year prior to COVID-19 or influenza hospitalization (and available in Mount Sinai’s records), a scan taken at hospital admission, and follow-up EKGs performed during hospitalization.

They manually measured QRS waveform height—a measure of the electrical activity of the ventricles, the major chambers of the heart—on all electrocardiograms; changes in this electrical activity could be a sign that the ventricles are failing. The researchers analyzed follow-up EKGs after hospital admission and analyzed changes in the waveforms according to a set of criteria they developed called LoQRS amplitude (LoQRS) to identify a shrinkage of the electrical signal on the EKG. LoQRS was defined by QRS amplitude measuring less than 5mm measured from the arms and legs or less than 10mm when measured on the chest wall as well as a relative reduction in waveform height in either location by at least 50 percent.

Fifty-two COVID-19 patients in the study did not survive, and the analysis shows 74 percent of those patients had LoQRS. Their EKG QRS waveforms became smaller roughly 5.3 days into their hospital admission and they died approximately two days after the first abnormal EKG was found.

“When it comes to caring for COVID-19 patients, our findings suggest it may be beneficial not only for health care providers to check an EKG when the patient first arrives at the hospital, but also follow-up EKGs during their hospital stay to assess for LoQRS, particularly if the patient has not made profound clinical progress. If LoQRS is present, the team may want to consider escalating medical therapy or transferring the patient to a highly monitored setting such as an intensive care unit (ICU) in anticipation of declining health,” adds Dr. Lampert.

The Mount Sinai Health System is New York City's largest academic medical system, encompassing eight hospitals, a leading medical school, and a vast network of ambulatory practices throughout the greater New York region. We advance medicine and health through unrivaled education and translational research and discovery to deliver care that is the safest, highest-quality, most accessible and equitable, and the best value of any health system in the nation. The Health System includes approximately 7,300 primary and specialty care physicians; 13 free-standing joint-venture centers; more than 410 ambulatory practices throughout the five boroughs of New York City, Westchester, and Long Island; and more than 30 affiliated community health centers. The Mount Sinai Hospital is ranked in U.S. News & World Report's "Honor Roll" of the top 20 U.S. hospitals and among the top in the nation by specialty: No. 1 in Geriatrics and top 20 in Cardiology/Heart Surgery, Diabetes/Endocrinology, Gastroenterology/GI Surgery, Neurology/Neurosurgery, Orthopedics, Pulmonology/Lung Surgery, Urology, and Rehabilitation. Mount Sinai Kravis Children's Hospital is ranked in U.S. News & World Report’s “Best Children’s Hospitals” among the country’s best in four out of 10 pediatric specialties. New York Eye and Ear Infirmary of Mount Sinai is ranked among the Top 20 nationally for ophthalmology. The Icahn School of Medicine at Mount Sinai is one of three medical schools that have earned distinction by multiple indicators: ranked in the top 20 by U.S. News & World Report's "Best Medical Schools," aligned with a U.S. News & World Report "Honor Roll" Hospital, and No. 14 in the nation for National Institutes of Health funding. Newsweek’s “The World’s Best Smart Hospitals” ranks The Mount Sinai Hospital as No. 1 in New York and top five globally, and Mount Sinai Morningside as top 20 globally, and “The World’s Best Specialized Hospitals” ranks Mount Sinai Heart as No. 1 in New York and No. 5 globally and the Division of Gastroenterology as No. 5 globally. For more information, visit https://www.mountsinai.org or find Mount Sinai on Facebook, Twitter and YouTube.