The global death count of COVID-19 is much lower than other diseases including tuberculosis, hepatitis B, pneumonia, HIV/AIDS, malaria, and many others.

The global death count of COVID-19 is much lower than other diseases including tuberculosis, hepatitis B, pneumonia, HIV/AIDS, malaria, and many others.

A graphic comparing various diseases through a bar graph contained this claim, which suggested that the magnitude of the COVID-19 pandemic was exaggerated and only caused “fake fear.” It cited the US Centers for Disease Control and Prevention (CDC), World Health Organization (WHO), and medical journal The Lancet as its sources. 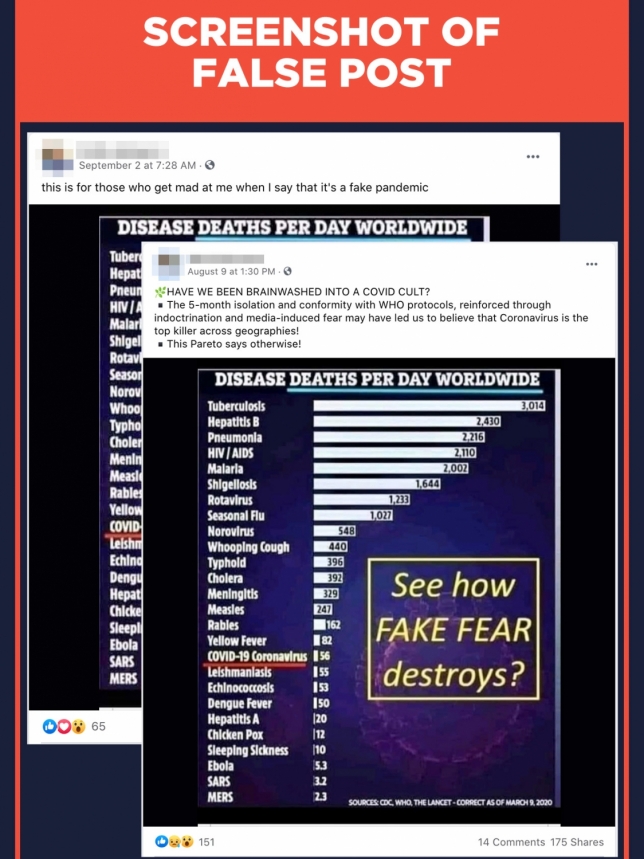 The graphic used outdated numbers (as of March 9, 2020) that did not reflect the situation when the graphic was shared on Facebook in August and September 2020.

On Sunday, September 6, WHO recorded a death toll of 5,446 worldwide – about 27 times the daily death toll of 205 as of March 9. The death count per day started to rise toward the end of March, and has been fluctuating daily up to the present.

Claim: The global death count of COVID-19 is much lower than other diseases including tuberculosis, hepatitis B, pneumonia, HIV/AIDS, malaria, and many others. Chaim Publisher: Facebook Date of Claim: 2020-09-02 Author of Article: Rappler.com Truthfulness: False

A reporter's PressPass is required to access this story until the embargo expires on 24-Sep-2020 2:00 PM EDT The Newswise PressPass gives verified journalists access to embargoed stories. Please log in to complete a presspass application. If you have not yet registered, please Register. When you fill out the registration form, please identify yourself as a reporter in order to advance to the presspass application form.

After more than six months of living in a pandemic, large percentages of Americans continue to indulge in unhealthy lifestyle habits, including overeating and increased use of alcohol and marijuana — all while many are exercising less, according to a study of the cultural impact of COVID-19 conducted by the USC Center for the Digital Future (CDF).

Molecular analysis of COVID-19’s powerful second wave in Houston shows a mutated virus strain linked to higher transmission and infection rates than the coronavirus strains that caused Houston’s first wave. Gene sequencing results from 5,085 COVID-positive patients tested at Houston Methodist since early March show a virus capable of adapting, surviving and thriving – making it more important than ever for physician scientists to understand its evolution as they work to discover effective vaccines and therapies.

As the COVID-19 pandemic continues with no end in sight, the annual flu season emerges once again. Cases of the flu have already begun to surface around the nation, and there are some reports of co-infection with COVID-19. Johns Hopkins Medicine experts say now is the time to take action to fight against the flu. Doctors recommend that everyone age 6 months and older get the flu vaccine each year to prevent infection from the virus or reduce the severity of the illness.

Mathematics: Modelling the timings of a COVID-19 second wave in Europe

How a second wave of COVID-19 infections may evolve across Europe over the next few months, using data on infection rates and travel within and between European countries, is modelled in a Scientific Reports paper.

Q&A: What’s in store for retailers during a pandemic holiday season?

The 2020 holiday season, much like the majority of the year, will be like none other before. But what does this mean for retailers? Simone Peinkofer, assistant professor of supply chain management at Michigan State University’s Eli Broad College of Business, discusses what holiday consumerism may look like for consumers and retailers alike.

A University of Liverpool study of air pollution in the UK during the first 100 days of lockdown has revealed that whilst nitrogen oxide levels were cut by half, levels of sulphur dioxide increased by over 100%.