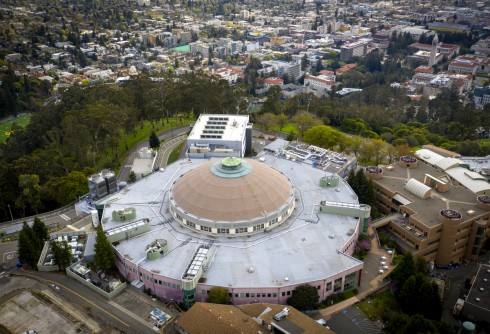 The domed Advanced Light Source (ALS) building at Berkeley Lab, and the nearby UC Berkeley campus, are visible in this drone photo taken in March 2020. The ALS has reopened to carry out COVID-19-related experiments. 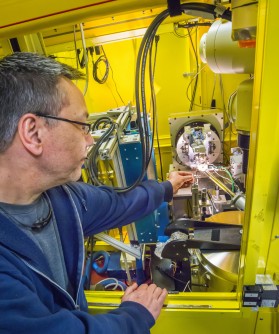 Jay Nix prepares an X-ray experiment at the ALS in this 2016 photo. 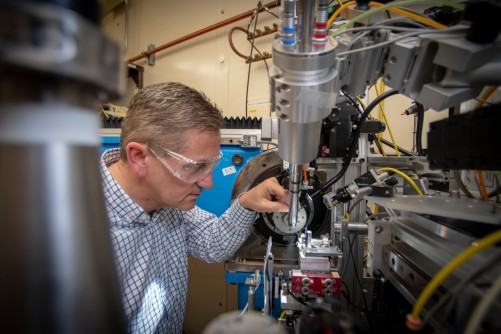 Marc Allaire works on an ALS beamline in this May 2019 photo.

Newswise — X-rays allow researchers to map out the 3D structure of proteins relevant to diseases at the scale of molecules and atoms, and Lawrence Berkeley National Laboratory’s (Berkeley Lab’s) Advanced Light Source (ALS) X-ray facility has been recalled to action to support research related to COVID-19, the coronavirus disease that has already infected about 2 million people around the world.

A small team of staff at the ALS, which produces beams of X-rays and other types of light to support a wide variety of experiments for researchers from around the world, on March 31 launched several experiments for other scientists who controlled the work remotely.

At this time, only approved COVID-19-related experiments are allowed at ALS – most staff and experiments at the ALS and Berkeley Lab have been sidelined because of shelter-in-place orders that are intended to limit the spread of the virus.

A small group of ALS staff who run the accelerator and ensure safe operations have supported on-site work since experiments resumed.

The specially approved ALS experiments – which were authorized by Berkeley Lab leadership – have so far been carried out by individual scientists working at separate experimental sites, known as beamlines, in the ALS facility in order to maintain social distancing. Additionally, on-site workers are taking extra precautions for safety such as regularly sanitizing equipment.

None of the work involves any live samples of the SARS-CoV-2 virus that causes COVID-19. The samples include crystallized viral proteins that cannot cause infection. Additional samples to be analyzed include host-cell proteins required for infection by the virus.

“Everyone I’ve talked to is taking an ‘everything’ approach,” said Jay Nix, a participant in the new experiments who is beamline director for the Molecular Biology Consortium, which supports and operates a beamline at the ALS (Beamline 4.2.2) and is a lab affiliate and partner.

“Every idea is on the table,” Nix said, including explorations of the form and function of the spiky proteins poking out of the COVID-19 virus in the now-ubiquitous colorized images displayed in COVID-19-related websites and news articles.

Structural studies can lead to drugs that target and attack the virus while leaving other vital systems intact, for example, or that can otherwise improve the body’s defenses against the virus.

“There are proteins that are making up the virus structure and a large number of other, non-structural proteins that help in the infection cycle of the virus,” said Marc Allaire, a beamline scientist at the ALS who supports several beamlines operated by the Berkeley Center for Structural Biology. The center receives support from participating members for this work, including from a large group of pharmaceutical companies across the U.S. and internationally.

The center is a part of the Lab’s Molecular Biophysics and Integrated Bioimaging (MBIB) division, which is connected to all of the beamlines and staff participating in the initial batch of approved COVID-19-related experiments.

The earliest experiments since the ALS restarted used three ALS beamlines (beamlines 4.2.2, 5.0.1, and 5.0.2) that all specialize in macromolecular crystallography, a technique for learning the 3D structure of proteins, viruses, and other samples by beaming X-rays at their crystallized forms.

Light from the X-rays striking the crystals produce patterns that computers then process into 3D reconstructions of the samples.

“I’m pleased the ALS is able to contribute to this important work and make its tools available to the biosciences research community,” said ALS Director Steve Kevan. “I personally want to thank our beamline scientists and operations staff for working together to make this happen under very trying circumstances.”

MBIB Director Paul Adams said, “It is a testament to the importance of the ALS for this kind of biomedical research that so many groups have requested access to help in their efforts to address COVID-19. The beamlines being used for the crystallography work developed a ‘rapid response’ capability several years ago, with remote access and automated data collection and analysis, and so were ready to hit the ground running when this crisis occurred.”

Work that has been approved at the ALS includes proprietary experiments by several pharmaceutical companies: Switzerland-based Novartis, which has an office in Emeryville, California; San Francisco-based Vir Biotechnology; and Canada-based IniXium, a drug-discovery contract research organization serving the U.S. biotech industry.

Also in the first batch are crystallography experiments by a group of researchers from the lab of David Veesler, an associate professor at the University of Washington. That team is focusing on the spiky proteins on the surface of the COVID-19 virus, which the virus uses to bind to and enter host cells, and how to neutralize them.

Another team, led by Daved Fremont, a professor at Washington University in Saint Louis, will be sending crystallized samples to the ALS, as will a team led by James Hurley, the Judy C. Webb chair and professor of biochemistry, biophysics, and structural biology at UC Berkeley.

Hurley said three structural biologists in his lab are working on COVID-19 research: Tom Flower, Cosmo Buffalo, and Snow Ren. The researchers “have an enormous amount of experience with X-ray crystallography and cryo-electron microscopy,” another technique to explore biological samples, he said.

“They have begun working on several projects to characterize structures involved in virus replication, with an emphasis on understanding how viral proteins interact with host proteins and membranes, and on the rapid application of this information to antiviral drug discovery in collaboration with others on campus,” he added.

A team led by Natalie Strynadka, a biochemistry professor at the University of British Columbia in Canada, is also expected to ship crystal samples for ALS experiments. Strynadka said her lab is collaborating with a team in Vancouver, Canada, to identify small molecular inhibitors that slow down COVID-19’s main viral protease (MPro), an enzyme that breaks down proteins into smaller forms.

In related work, her lab is working with Pennsylvania-based Venatorx Pharmaceuticals and a team led by David Baker at the University of Washington to identify MPro inhibitors. “Understanding where and how these inhibitors bind to MPro using X-ray crystallography will be key in guiding further development,” she said.

Ralf Bartenschlager, a virologist and professor at Heidelberg University in Germany, will be sending samples of COVID-19-infected cells, rendered inactive, for study using a technique known as soft X-ray tomography. In this collaborative effort, the aim is to unravel how infection by the SARS-CoV-2 virus alters the structure and organization of infected cells, with the long-term goal to identify viral and cellular targets perturbed by infection that are suitable for antiviral therapy. The experiment will be overseen by the Lab’s Carolyn Larabell, also a professor at UC San Francisco and director of the National Center for X-ray Tomography, which develops imaging technologies for biological and biomedical research.

The ALS is also asking the research community to submit other proposals for COVID-19-related experiments, Nix said.

ALS and Berkeley Lab leadership are considering whether to open up additional X-ray capabilities, such as small-angle X-ray scattering (SAXS) and wide-angle X-ray scattering, which enables high-speed characterization of biological samples that can be in a more natural form than some other techniques allow.

Greg Hura, an MBIB research scientist and associate adjunct professor at UC Santa Cruz who operates the SIBYLS (Structurally Integrated BiologY for the Life Sciences) Beamline 12.3.1 at the ALS that conducts SAXS experiments, said, “SIBYLS can also play a role in a multi-technique and multi-national lab consortium to visualize the potential weaknesses of the COVID-19 virus, and help develop new diagnostics.”

He added, “Viral genomes (DNA sequences) are small but the large molecules they encode are transformers that can adopt many functions in different contexts. SAXS provides an avenue to study these systems in the many contexts they might be targeted, and can identify the states that are most amenable to viewing them at higher resolution.”

Nix noted that Beamline 4.2.2, which he operates, and some other beamlines at the ALS use robotic sample-delivery systems so that once they are filled with samples, experiments can largely operate via remote control.

It took a team effort, from ALS managers and staff to Berkeley Lab leadership, to make the COVID-19-related research happen, Nix noted. “They were working, even before the ‘lights went out,’ at the Lab, to see what we could do.”

He also noted that a variety of sources of research funding are making this work possible. “It’s public, private, and government support all coming together, which is really nice to see,” he said.

The broader research community is welcome to apply for remote experiments relating to COVID-19 and SARS-CoV-2 at some beamlines via the National Institutes of Health-supported ALS-ENABLE program and an ALS fast-track proposal process known as RAPIDD (Rapid Access Proposals, Industry, and Director’s Discretion beam time).

The Advanced Light Source is a DOE Office of Science user facility. 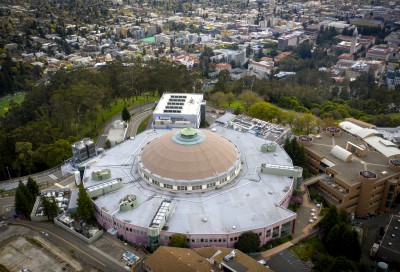 Caption: The domed Advanced Light Source (ALS) building at Berkeley Lab, and the nearby UC Berkeley campus, are visible in this drone photo taken in March 2020. The ALS has reopened to carry out COVID-19-related experiments. 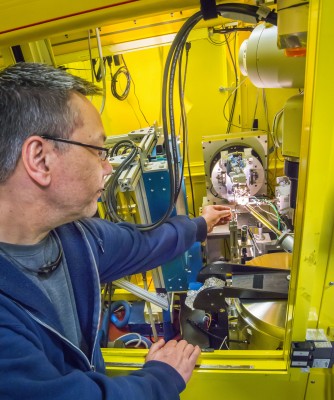 Caption: Jay Nix prepares an X-ray experiment at the ALS in this 2016 photo. 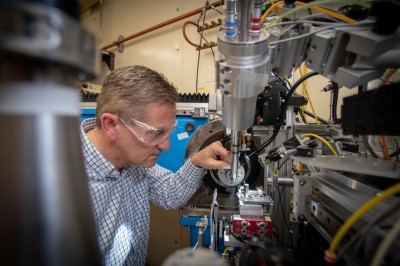 Caption: Marc Allaire works on an ALS beamline in this May 2019 photo.