Studies highlight 'unprecedented and unique dangers' for children during COVID-19 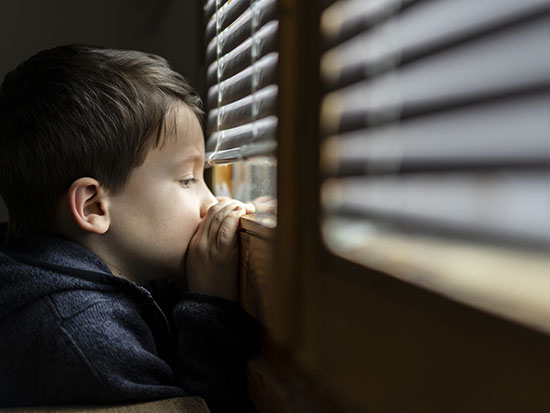 Newswise — Two new studies investigating child maltreatment during the COVID-19 pandemic reveal "concerning results" that confirm warning signs seen early in the pandemic, according to researchers at UAB and the University of Michigan.

In the first study — an online national survey of more than 400 parents — participants who reported that they were worried about their finances and other pandemic-related concerns were up to three times more likely to report they were yelling, hitting or neglecting their children. The second study followed up with 106 mothers taking part in a long-term parenting study through UAB. Mothers who described they had increased hitting, yelling or neglect during the pandemic had the highest scores on established measures of child-abuse risk. Mothers with financial loss from change in employment during the pandemic also had higher child-abuse risk scores. And mothers who felt lonelier during the pandemic also reported that their parenting had become harsher, reporting more conflict, hitting, yelling and neglect.

The COVID-19 pandemic and the economic devastation and social isolation it has caused are particularly troubling to researchers studying child maltreatment, said Christina Rodriguez, Ph.D., professor in the Department of Psychology. Rodriguez is the lead author of a paper describing the two studies, "The Perfect Storm: Hidden Risk of Child Maltreatment During the Covid-19 Pandemic," published online Dec. 23, 2020, in the journal Child Maltreatment.

"As soon as the pandemic hit, I knew this could be risky for children who were already unsafe," Rodriguez said. In an article for Psychology Today published in January, Rodriguez notes that COVID-19 has brought "unprecedented and unique dangers" for children. "I'm trying to spotlight this problem more broadly so people pay attention to children, too — even beyond whether they are getting an adequate education," she said.

Previous research has shown that stress and a lack of social support for parents both increase the risk of child abuse. Other studies report that child maltreatment rose after the economic downturn of the Great Recession in the late 2000s and that unemployment, food insecurity and financial stress increase parents' risk of child maltreatment. Meanwhile, "the most frequent reporters of child maltreatment — teachers, doctors, mental health professionals — suddenly lost access to children during this pandemic," Rodriguez writes in Psychology Today. Indeed, official reports to child welfare authorities began to plummet in spring 2020, while news reports indicated an increase in abuse-related visits to hospitals.

"The lay public should be paying a lot more attention to children and families than they might be doing," Rodriguez said. "If a family was struggling before the pandemic, things are likely worse now."

Anyone who is concerned about potential maltreatment of a child they know can find the appropriate local contacts on the Child Welfare Information Gateway from the U.S. Department of Health and Human Services, Rodriguez said.

"People often think they have to be sure that maltreatment is happening just to call," she said. But this is not the case. "Calls can remain confidential for the reporter, and folks can express concerns just to have someone be able to reach out officially to offer help to families, if the person can't offer the family help directly."

Parents may or may not be aware that their parenting has become more aggressive or that they are neglecting their children, Rodriguez said. “It is important to realize that when parents feel like they are not at their best, their whole family is affected,” she noted. “Even if parents realize something is wrong, they may hesitate to reach out. We should encourage families to  feel comfortable seeking support from extended family and friends.”

Rodriguez recommends several resources that the American Psychological Association (APA) has been compiling on its website and a Facebook group for the APA COVID-19 Children and Families Taskforce and this Google Doc on COVID-19 resources for children, teens and families.

In the paper's conclusion, Rodriguez and co-authors argue that "innovative approaches will be needed to reach children faced with maltreatment to gauge its scope and impact in the pandemic's aftermath."

“We are probably going to need to be technologically creative during the pandemic — including more monitoring of social media,” Rodriguez said. “I mention in the article the idea of developing or adapting phone apps for safety planning and possibly communicating safety status.” The problem is, “that will leave out a lot of kids who don’t use such platforms — hence the creativity we are going to need. If we were more planful in advance of this crisis, we could have had virtual tools in place for children to provide check-ins online with their teachers or doctors. After the fact, we are going to really struggle to figure out what happened during this time period.”

The trouble with the current welfare system is that it is reactive, Rodriguez and her co-authors write, whereas a proactive, “public health-oriented approach to child maltreatment" is needed.

Efforts to eliminate child maltreatment should focus on primary prevention, the researchers argue, including altering social norms through public education campaigns that destigmatize receipt of services, and echoing a call in a 2016 report from the Centers for Disease Control and Prevention to “reframe the way people think and talk about child abuse and neglect and who is responsible for preventing it.”  Systemic changes, including economic support for families, could have a significant impact, Rodriguez said.

“We should not be waiting for abuse to occur, because frankly, we miss almost all of it that way,” Rodriguez said. “If we had links to families at multiple levels, that would help, especially when a crisis hits and some of those avenues disappear. If we were in multiple places, parents would have more than one way to connect to their supports. One really obvious place would be doctors’ offices — providing more of an opportunity to serve as a screening and referral source, which will require staff training. Those sorts of systemic changes would easily pay for themselves, because prevention is always less expensive than intervention.”