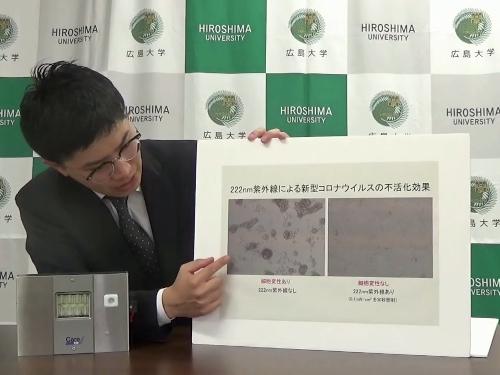 Hiroshima University researchers found that using Ultraviolet C light with a 222 nm wavelength, which doesn't harm living cells in the human eye and skin, effectively kills the SARS-CoV-2. This is the first study in the world that proves its potency against the virus which causes COVID-19.

Newswise — A study conducted by Hiroshima University researchers found that using Ultraviolet C light with a wavelength of 222 nanometers which is safer to use around humans effectively kills SARS-CoV-2 -- the first research in the world to prove its efficacy against the virus that causes COVID-19.

Other studies involving 222 nm UVC, also known as Far-UVC, have so far only looked at its potency in eradicating seasonal coronaviruses that are structurally similar to the SARS-CoV-2 but not on the COVID-19-causing virus itself. A nanometer is equivalent to one billionth of a meter.

An in vitro experiment by HU researchers showed that 99.7% of the SARS-CoV-2 viral culture was killed after a 30-second exposure to 222 nm UVC irradiation at 0.1 mW/cm2. The study is published in the American Journal of Infection Control.

Tests were conducted using Ushio's Care222TM krypton-chloride excimer lamp. A 100 microliter solution containing the virus (ca. 5 × 106 TCID50/mL) was spread onto a 9-centimeter sterile polystyrene plate. The researchers allowed it to dry in a biosafety cabinet at room temperature before placing the Far-UVC lamp 24 centimeters above the surface of the plates.

A wavelength of 222 nm UVC cannot penetrate the outer, non-living layer of the human eye and skin so it won't cause harm to the living cells beneath. This makes it a safer but equally potent alternative to the more damaging 254 nm UVC germicidal lamps increasingly used in disinfecting healthcare facilities.

Since 254 nm UVC harms exposed human tissues, it can only be used to sanitize empty rooms. But 222 nm UVC can be a promising disinfection system for occupied public spaces including hospitals where nosocomial infections are a possibility.

The researchers, however, suggest further evaluation of the safety and effectiveness of 222 nm UVC irradiation in killing SARS-CoV-2 viruses in real-world surfaces as their study only investigated its in vitro efficacy.

The Far-UVC research is one of the four COVID-19 studies conducted by Hiroshima University scientists that received funding from the Japan Agency for Medical Research and Development.

Many laboratories in the university are conducting research on the novel coronavirus under the "Hiroshima University CoV-Peace-Project."

Since its foundation in 1949, Hiroshima University has striven to become one of the most prominent and comprehensive universities in Japan for the promotion and development of scholarship and education. Consisting of 12 schools for undergraduate level and 4 graduate schools, ranging from natural sciences to humanities and social sciences, the university has grown into one of the most distinguished comprehensive research universities in Japan. English website: https://www.hiroshima-u.ac.jp/en