Newswise — When the COVID-19 pandemic hit this spring, many high school and college students whose academic year had already been radically transformed also had to rejigger summer plans. Internships they’d expected to be in-person experiences moved to all-virtual formats. For more than 30 of the nearly 180 students participating in virtual summer programs at the U.S. Department of Energy’s Brookhaven National Laboratory, that disruption presented an opportunity—a chance to engage in research related to the virus responsible for the upheaval.

Their projects—ranging from developing information-sharing tools to running computational drug-discovery experiments and devising proposals for predicting pandemic spread, assessing hand sanitizer effectiveness, and more—may help advance understanding of the SARS-CoV-2 virus and speed the discovery of ways to stop it.

Many of the students had no idea what they were getting into when they initially applied.

“I was planning to do research on E. coli and plant-based biology,” said Sonali George, a rising senior at Stony Brook University (SBU) who is majoring in biology, minoring in chemistry, and also has a background in fine arts. She recalled how Desigan Kumaran, her Biology Department mentor in the Student Undergraduate Laboratory Internships (SULI) program, “was warning me that the lab was going to smell because of the E. coli, and I was prepared. Then, when they had to make everything online, I was so stressed. I wasn’t planning on doing a virtual internship; I came here for a hands-on experience! But when Dr. Kumaran said we are doing coronavirus research, I was like, ‘Yes, it’s so cutting-edge!’”

After spending the first few weeks of her internship researching the virus’s lifecycle, George created an engaging animated video that explains how the virus replicates after infecting human cells. Drawing on her background in science and art, the video brings the science out of the textbooks.

“There is a lot of general bio you learn in school—you learn about it and move on,” George said. “But being in this internship and having this pandemic gave me a chance to see it actually happening in the world.”

While the video is aimed at high-school and college biology students, Kumaran noted its usefulness for researchers as well. “When we’re working to develop drugs or create other defenses against the virus, we have to understand this basic biology and be able to explain it to others,” he said.

Detailed knowledge of how the virus replicates inside the human body—and how the body responds—can point to different strategies for stopping it. Many researchers have been working to block the interaction of the coronavirus “spike” protein with the human-cell receptors to which it binds—the first step of infection. Three High School Research Program (HRSP) students participating in research with Hubertus Van Dam of the Lab’s Computational Science Initiative (CSI) took aim at one of the final steps—the virus’s exit strategy.

“After the virus is replicated and assembled, it needs to leave the cell,” explained Peggy Yin, who is entering her senior year at Port Jefferson High School. She described a key element of the human body’s defense in which a protein called “tetherin” binds newly replicated virus particles to the membrane of the infected cell to keep them from getting free to infect other cells. But unfortunately SARS-CoV-2 makes a protein that interferes with this tethering protein, thwarting our own protective mechanism. “Maybe, if we inhibit the virus protein, we can let ‘tetherin’ do its thing,” Yin said.

She and fellow HSRP/CSI students Jacob Zietek and Christopher Jannotta—who’d just graduated from Farmingdale and Eastport South Manor high schools, respectively—ran a series of protein-protein docking studies to learn how tetherin and the virus protein interact. Then they conducted a series of small-molecule docking studies and molecular dynamics simulations to narrow the search for molecules that might inhibit the virus protein. Learn more about their work in this linked feature article.

“Because the project these students were working on is contributing to a broader collaboration—the National Virtual Biotechnology Laboratory (NVBL)—they had access to Brookhaven’s supercomputing clusters to run the molecular dynamics simulations,” said Van Dam. “This is real-world research, with real potential impact. The fact that these internships ran ‘virtually’ really didn’t make a difference.”

“I definitely think what we did is going to help all the scientists working on these therapeutic agents,” said Jannotta. “It’s going to help them get a more narrow view of what inhibitors might actually be worth pursuing.”

Tracking all the potential treatments being tested against COVID-19 is a challenge. SULI intern Emma Hert, now a junior at Wheaton College in Massachusetts, who was also mentored by Kumaran in the Biology Department, sought to make sense of the data in two major clinical trial databases. She was looking for commonalities of drug mechanisms, and indications of which drugs or vaccines might be most successful.

“The majority of the trials I analyzed have not found highly effective drugs,” she said. Many of the drugs she cataloged were initially approved for treating other diseases, and many are designed to suppress the immune response—considered as potential COVID-19 treatments, she and Kumaran noted, because some of the disease’s damage may be triggered by inflammation and other immune system responses. Hert’s analysis revealed the need for additional strategies.

“What probably needs to be done is to have a drug that is formulated specifically for this virus,” she said, recognizing that this will take time. “But the sheer amount of drugs being explored does give me some optimism,” she noted. “Scientists all over the world are working to develop new treatments.”

The volume of studies can also lead to confusion—among the general public through media reports and also among researchers, Kumaran noted. “Emma’s main objective was to compile concise information from published scientific journals to clarify the confusion,” he said.

Hert said she’s glad she had a chance, even virtually, to explore such an important issue in biology. “It’s doing science that is the biggest thing in the world at the moment—what you hear in the news every single day. That was fascinating to me,” she said.

All of the virtual summer students at the National Synchrotron Light Source II (NSLS-II)—one of the major DOE Office of Science user facilities at Brookhaven Lab—had a chance to propose studies relevant to battling the pandemic.

“These were not the students’ SULI/HSRP projects. They all have full-time projects with their mentors. This was a side project that we gave to all the undergraduate and high school students as a team-building exercise, and to teach them how to write a proposal,” said NSLS-II’s Lisa Miller, who coordinated a friendly competition among five teams of students in partnership with NSLS-II scientist Tiffany Victor.

“The only criteria was that the proposal had to address some problem with COVID-19—something biological, epidemiological, economic, or social—and they had to use their internship knowledge to develop it,” Miller said.

On August 6, the teams presented their ideas via videoconference to other students, scientists, and interested listeners, using NSLS-II’s standard proposal format to explain each project’s background, goals, experimental plan, expected impact/outcome, and possible pitfalls. Everyone watching got to vote for a winner based on the significance, novelty, and feasibility of the research, and whether the team had adequately considered limitations.

The projects were impressive! One group (spoiler alert: the winner) proposed using an artificial system for linking up proteins to connect one of the virus’s most important enzymes to a protein that serves as a cellular “destroy me” flag. Flagging that enzyme for destruction would prevent the virus from making copies of itself to spread infection further. The team would use computational modeling to search through libraries of drugs already approved for use in humans to find a linker protein capable of connecting the enzyme and “flag,” and study the complex using x-rays at NSLS-II to learn more about how it functions. The combo itself might serve as a drug to treat COVID-19, or guide the design of even more effective drugs.

“If we could get this drug created, it could serve as an effective treatment to minimize the symptoms and spread of COVID-19, and potentially help in developing future drugs,” said Andrea Sprague-Getsy, now a senior at Binghamton University. “Working with my teammates was amazing as we got to bond over the creation of this proposal. I hope they got as much out of it as I have.”

Two other projects proposed using machine learning and artificial intelligence—in one case to predict where outbreaks would arise next based on an algorithm accounting for location, travel, disease incidence, and other data; and in the other to identify and flag potential misinformation about the virus using a web browser extension, and possibly point users to more accurate information.

“If we can predict where the next hot-spots will arise, it could help curb the spread of disease,” said Jennefer Maldonado, a first year graduate student at SBU and member of the epidemiological modeling proposal team. The data would be displayed in highly visual, customizable map format, “so if you have to plan a trip you can look at where hot spots are on your drive, and where it is safest to stop.”

For both machine-learning proposals the key would be to train the model with accurate information.

“We’d continuously train our model with known facts, and only deploy it once we are confident in its ability to predict misinformation and give a score indicating a gradient of truthfulness. Ideally our program would also highlight text, somewhat like the programs used to detect plagiarism, to point out sections where readers should have some doubt,” said Brandon Catalano, a first year graduate student at SBU.

Another map- and data-science driven proposal was to develop a Snap Map-like app to help users determine whether a location is safe to visit based on gathering users’ GPS data and reports about whether people in the area are maintaining social distancing. The app would even notify you if you are within six feet of another user.

Holdy Chauvette, a junior at Farmingdale State College, added, “Areas where lots of people use the app should have lower infection rates because the app will help people avoid high-density places.”

Finally, back in the world of basic virus-fighting tactics, one group sought to compare different hand sanitizers to determine whether additives such as moisturizers, scents, or colorants affect antiviral efficacy.

Competition co-coordinator Victor said, “The students did an amazing job! We were quite impressed with the unique ideas they proposed—which are all feasible by the way. We wanted to make their virtual internship interactive and exciting. This creative exercise provided additional peer interaction and gave them an opportunity to use their problem-solving skills to address a very relevant research problem that we’re all living through.” said Tiffany Victor.

William Dudarov, a junior at Carleton College in Northfield, Minnesota, concluded, “This challenge wasn't about getting the prize; it was really about critical thinking in rapidly changing times, and, specifically, thinking about possible solutions to major problems facing society using everything we've learned so far this summer and the scientific resources available at Brookhaven.” 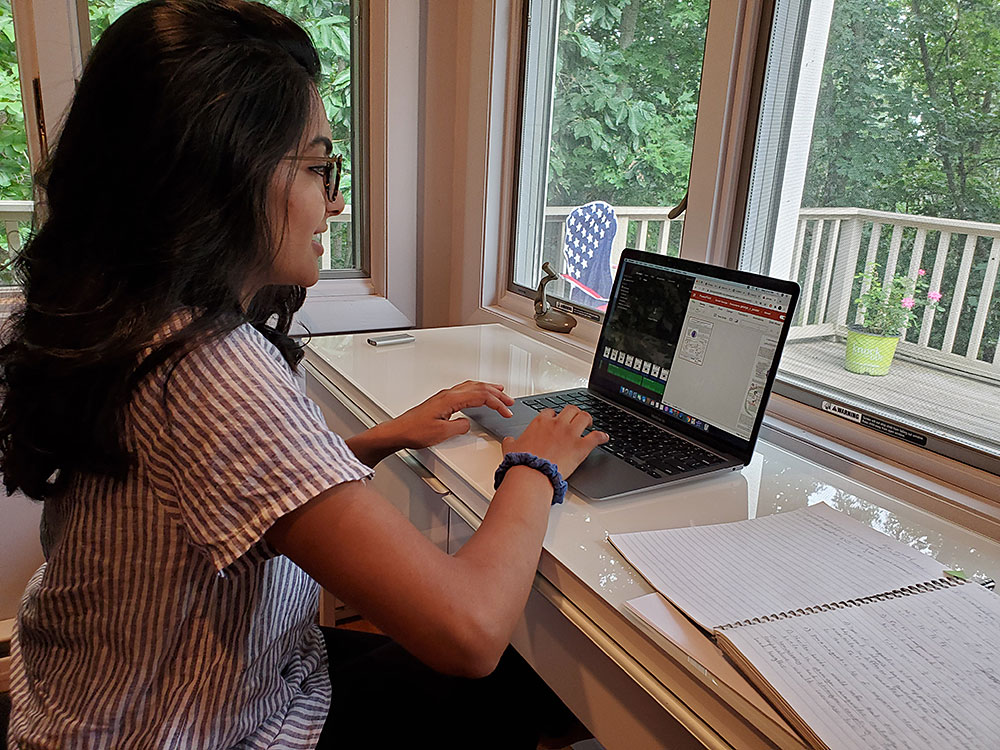 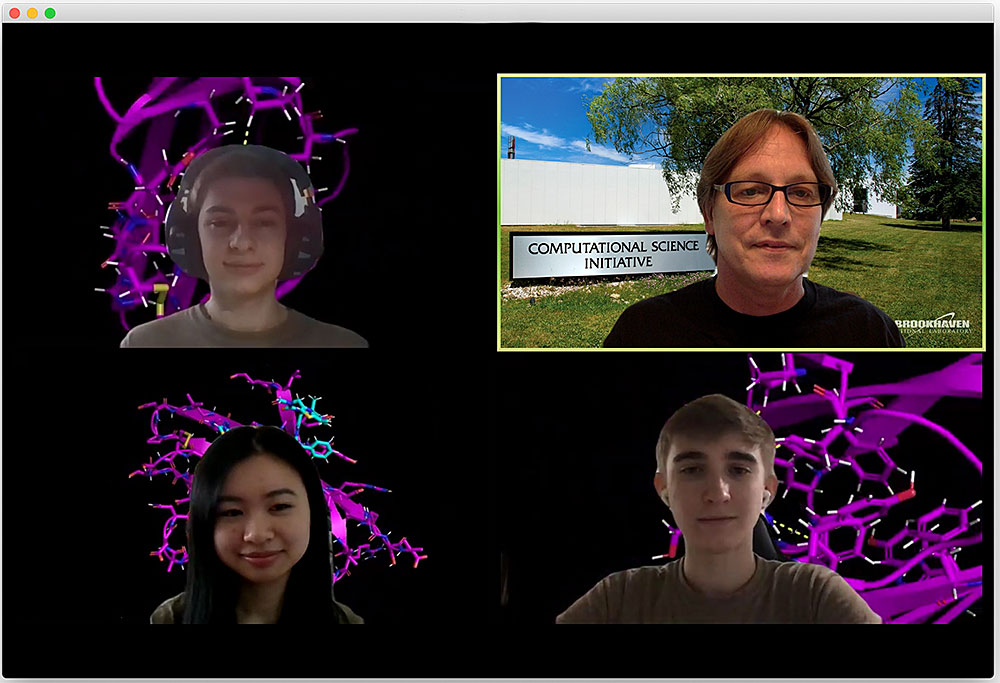 Caption: This image shows the predicted docking position of a possible small molecule inhibitor (blue) in a target pocket on a SARS-CoV-2 virus protein (magenta). 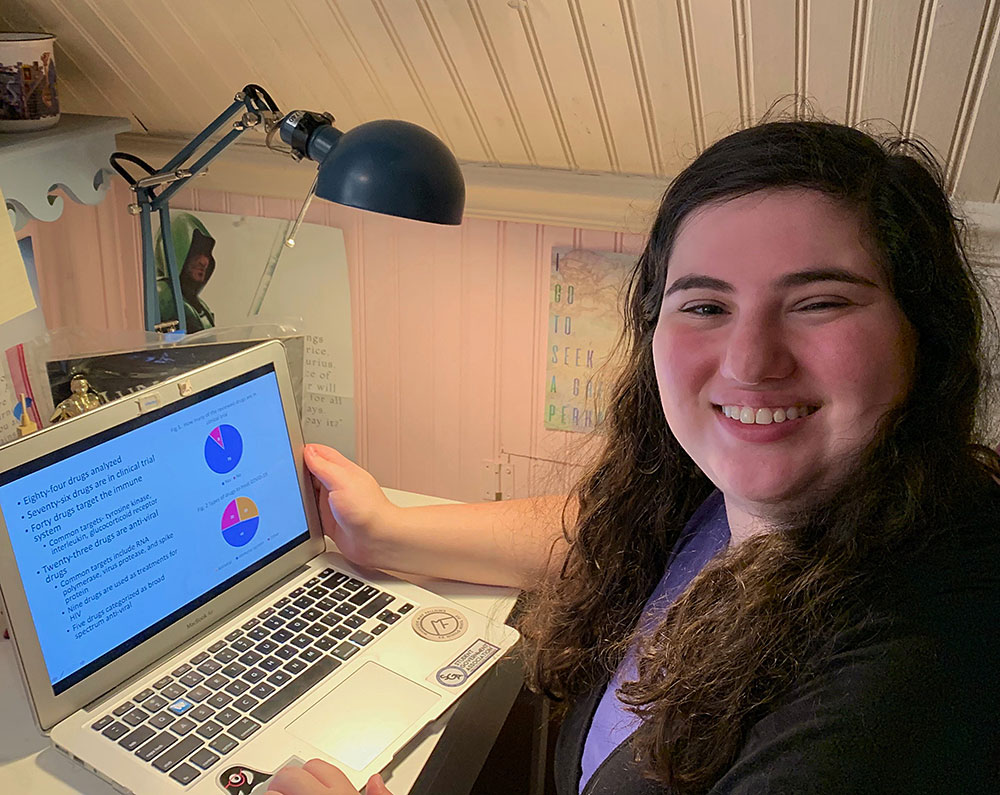 Caption: SULI intern Emma Hert of Wheaton College, MA, with a slide from her presentation tracking drugs being tested against SARS-CoV-2 in clinical trials. 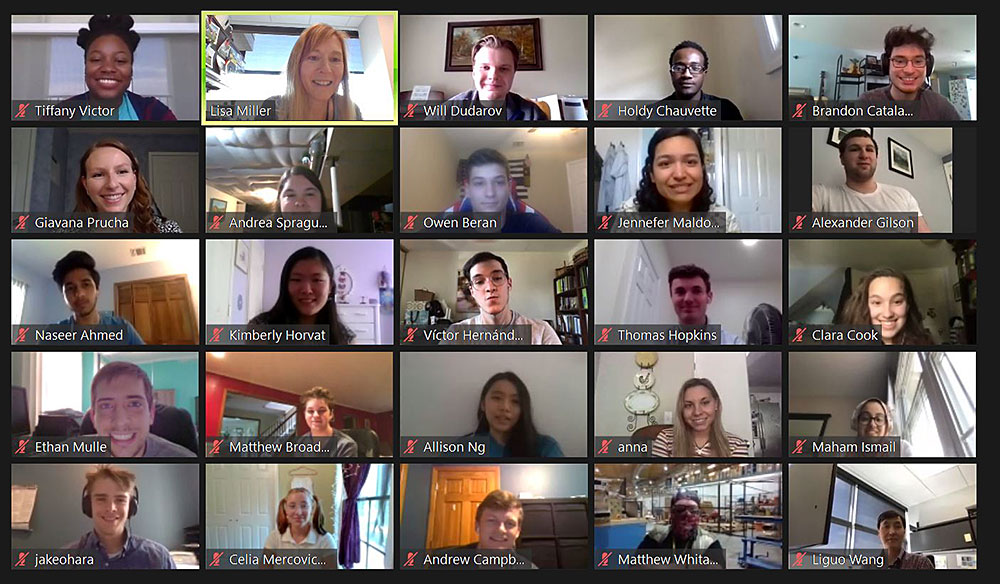 Caption: A screenshot of NSLS-II interns presenting their COVID-19 project proposals during the final part of this team-building competition.

Caption: A selection of slides from the NSLS-II students' project presentations