Newswise — A young health care entrepreneur, a New Mexico native who grew up just south of Las Cruces, may hold the key to testing millions of Americans to see if they are infected and spreading the coronavirus.

His company, E25Bio, is currently pushing to get the Federal Drug Administration’s Emergency Use Authorization by September 1 to launch on the market.

“To my knowledge, E25Bio is among a few companies in the world that have produced direct antigen rapid tests (DART) for SARS-COV-2 detection,” said Bobby Brooke Herrera, E25Bio Interim CEO and Chief Science Officer. “The E25Bio DART enables detection of active infections in a rapid way to triage the severely infectious and ill from those who are uninfected.”

The E235Bio DART is a less expensive, paper-based test that can deliver COVID-19 results in 15 minutes or less. The test is similar to a pregnancy test with no moving parts, no machinery, and results in a visual readout.

“There are many rapid antibody-based tests that are coming to market,” Herrera said. “These tests do not identify active COVID-19 infections, but rather let patients know they were infected.”

Molecular diagnostic methods such as gold standard polymerase chain reaction (PCR) require laboratories to charge $50 to $100 or more per patient. Rapid tests such as those produced by E25Bio cost significantly less and don’t require lab processing.

Herrera grew up in San Miguel, New Mexico, and earned his bachelor’s degree in biology at NMSU in 2012. He earned a master’s degree at Harvard’s Divinity School then pursued his Ph.D. at Harvard’s T.H. Chan School of Public Health, where he worked with professor Phyllis Kanki, a pioneer in the research of HIV1 and HIV2.

In 2018, he co-founded his company with career MIT researcher Irene Bosch and MIT professor Lee Gehrke. Last fall, Herrera was named by Forbes magazine among the top 30 young entrepreneurs for 2020 creating solutions to some of health care’s most pressing problems.

By July 2020, the company has raised $12.92 million in funding from Venture Capital, National Institutes of Health, and the Bill and Melinda Gates Foundation.

E25Bio’s DART for COVID-19 is low cost and scalable. However, part of the challenge is that antigen-based tests have lower sensitivity as compared to PCR tests. A recent op-ed in New York Times, written by Herrera’s colleague Harvard professor Michael Mina, has called for the FDA to prioritize low-cost, scalable diagnostic solutions such as the paper-based strip being developed by E25Bio. Modeling studies show that frequency and coverage of diagnostic testing is more important than analytical sensitivity.

“Our manufacturers can produce millions of tests per week,” Herrera said. “This is in stark contrast to PCR, which any one hospital can only test up to 5,000-10,000 patients per day.

“Additionally, the E25Bio DART enables contact tracing, as it can paired with a mobile phone app to report test results and epidemiological data in real-time to the cloud. Diagnosis during the active phase of infection is important because one is able to then isolate before transmitting the virus to others.”

Herrera’s study of both religion and science has influenced his social justice approach to public health.

“I'm passionate about the basic biology of infectious disease pathogenesis, but also I’m intrigued by the anthropology or the human side of those infected with these microorganisms,” Herrera said. “If we can understand structural determinants and human behavior and combine that knowledge with rigorous science and experimentation, we will be able to develop and implement more robust vaccines and diagnostic tests.

“We need to get to a place where there is a just public health system.” 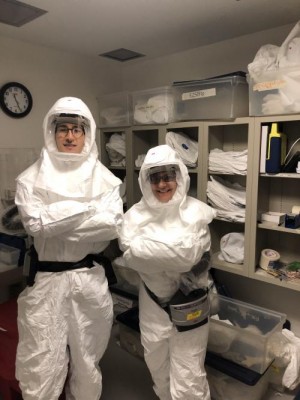 Caption: NMSU alumnus and E-25Bio co-founder Bobby Brooke Herrera is with co-founder Irene Bosch - preparing to go into the high containment lab. The company has developed a rapid diagnostic test for COVID-19 that returns results in about 15 minutes. 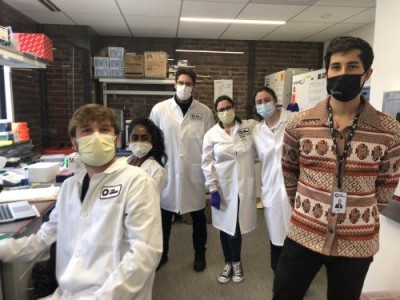