Philosophy professor launches YouTube channel with daily videos to encourage students and the public during the pandemic.

Newswise — In early March, as Aaron Simmons saw the COVID-19 pandemic develop, he watched the public grow increasingly anxious, scared and insecure. He felt it himself when he dropped his son, Atticus, off at his elementary school.

“I was sending him into school with 700 other kids, and I was going immediately home and washing my hands,” Simmons says.

Simmons, an associate professor of philosophy at Furman University, wanted to do something for the public and for his students, who were not returning to campus for the rest of the semester. So, he turned his iPhone toward himself and started shooting videos, applying lessons from philosophy to the pandemic. He launched a YouTube channel, “Philosophy for Where We Find Ourselves,” with a new video every day.

If your idea of philosophy is out-of-touch, highbrowed pontificating about the obscure, you’ll be surprised.

Simmons is a former professional drummer who appears in his videos wearing Furman sports T-shirts and ball caps. The videos are upbeat and inspirational. In one episode, he’s talking about gratitude from his driveway as Atticus creates chalk art behind him. In another, he turns the discovery of a waterfall in the woods behind his house into a lesson on despair. 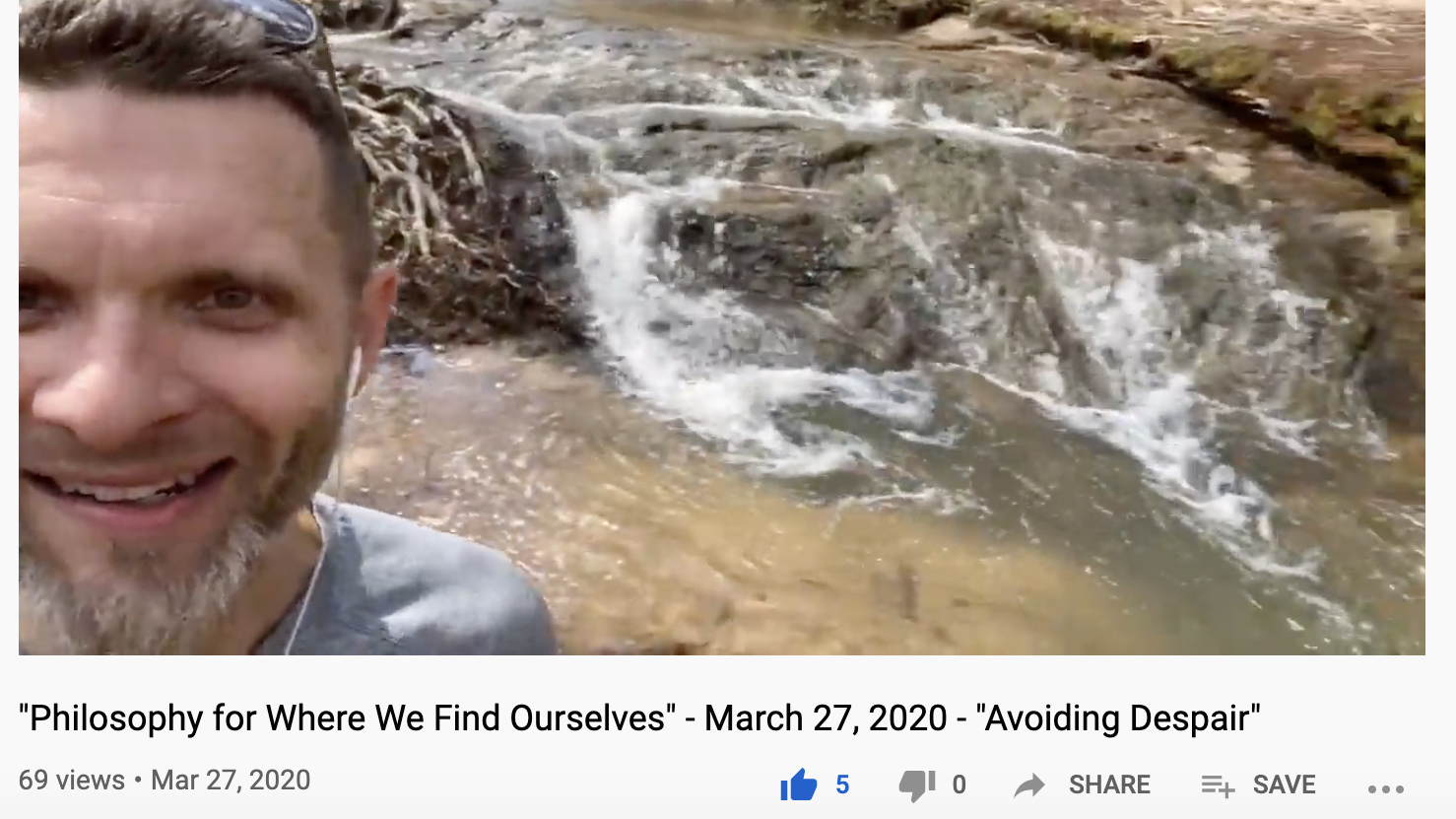 Aaron Simmons turns the discovery of a waterfall into a lesson on how to avoid despair.

"The sound of rushing water always encourages me," Simmons says as he walks us around a little bend in a creek to reveal a beautiful waterfall. The sound, he says, "reminds us that life goes on, that hope remains and that despair, even though (it's) something that's tempting many days, is also something that doesn't have the final word, because despite what we can see, there's always a bend in the river."

Simmons sprinkles his videos with references to Kierkegaard, Socrates and other famous philosophers. In this video about character, he talks about "virtue ethics," which is "grounded in the teaching of Aristotle and the idea is that ethics is not simply about a particular action ... but it's about our very character."

But philosophy is especially relevant during the pandemic. "It provides perspective for “all of the questions we are asking right now. How will I move forward? What matters to me? Where are my priorities? Will I remain virtuous despite the fact that I’m scared?,” Simmons says.

Simmons discovered that he could quell his own anxiety by thinking about times before the pandemic. He realized that what mattered before – relationships, justice, moral leadership, being virtuous and kind – still matters, and it will matter when COVID-19 is no longer a threat.

“We are always nested in the human condition,” Simmons says. “Philosophy helps us figure out what’s worth doing wherever we find ourselves. It seemed really important to spread that message now.”

He shoots the videos himself and cuts together four- to five-minute episodes, tying classic philosophical teachings to everyday activities. Twice a week he also posts 30-minute videos in a series called, “Two Philosophers, One Conversation,” which feature interviews with other philosophers, like Todd May, a Clemson professor and consultant on the hit TV show “The Good Place,” and Tom Morris, a New York Times bestselling author.

Simmons says he hopes his videos give his students, and others, license to feel fear, but to also take five minutes to think about things differently in order to find hope and the strength to move forward.

“When we realize the practicality of philosophy in essential ways, we’ll stop adjusting ourselves to the so-called real world, and instead start think about what the world should look like, and then do what it takes to make it real,” he says.

For example, he says, the pandemic offers the opportunity to think about a world where everyday issues like health care and social justice are not divisive, but calls to solidarity and social engagement.

“Isn’t it strange that we’re now depending on people to bring us food and help us shelter at home, stock shelves and work the third shift making masks, jobs that just a few months ago many in our society didn’t think were worth $15 and hour,” he says. “Even if the pandemic has changed the world, it has not changed the simple fact of human dignity and the shared realities of the human condition.

“Despite the crisis, and fear, and suffering, and pain,” he says, “I think we should be about the business of thinking well about how to do human life better, and maybe this invites us to see what that could look like.”

Simmons closes every video with a philosophical quip that offers a lesson on taking each day as it comes and living each day to the fullest. "It's a low-stakes way of saying we've been here before. That 'before' was every single day of our life.

"I'll see you tomorrow unless a piano falls on our heads." 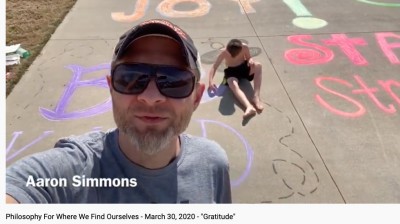 Caption: Philosophy professor Aaron Simmons offers daily videos that offer a philosophical lens for the pandemic, like a lesson on gratitude that stemmed from his son's desire to help people. 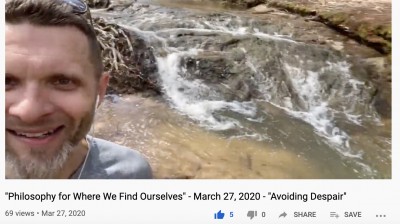 Caption: Philosophy professor Aaron Simmons offers daily videos that offer a philosophical lens for the pandemic, like turning the discovery of a waterfall into a lesson on despair.

Caption: Philosophy professor Aaron Simmons offers daily videos that offer a philosophical lens for the pandemic, like how being creative can help us stay healthy.