Newswise — AUSTIN, Texas -- As more people return to pre-pandemic lifestyles, 73% of Texas Democrats indicate they somewhat or strongly support the idea of vaccine passports, while 72% of Republicans somewhat or strongly oppose, according to the latest University of Texas/Texas Tribune Poll.

The latest poll showed significant differences along party lines on Texans’ attitudes about COVID-19 vaccines: 79% of Democrats report being vaccinated, compared with 47% of Republicans. And about a quarter of Texans (24%) say they are not planning on getting a vaccine.

Overall, nearly half (47%) of Texans report that they are living “normally,” and concerns about the spread of the virus in the state are dropping, with nearly half indicating that they are “not very” (24%) or “not at all” (23%) concerned that they, or someone they know, will be infected.

“Even as more Texans resume their normal behaviors, we see persistent levels of vaccine resistance that correspond to public health experts’ concerns about the continuing threat of COVID-19 variants to those who aren’t vaccinated,” said James Henson, a co-director of the poll and director of the Texas Politics Project at UT Austin.

The poll also asked Texas voters with children living at home whether they would vaccinate them as soon as a vaccine became available to them: Nearly a third (31%) say that they will not, and 20% say they are uncertain. By comparison, 21% report that their child has already received a vaccine, with 28% indicating they would get their child vaccinated as soon as it became available. Overall, 74% indicate they are comfortable sending their children to school, regardless of any current restrictions — up from 35% in last June’s UT/TT poll, and 63% in April.

“We’re seeing a similar hesitancy among parents when it comes to vaccinating their children as many adults expressed at the beginning of the vaccine rollout,” said Joshua Blank, research director of the Texas Politics Project. “We should expect parents to become more comfortable vaccinating their children, but we should also be prepared for a similar degree of resistance as we’ve seen among adults.”

The online poll surveyed 1,200 self-declared registered voters in Texas June 10-21 and had an overall margin of error of +/- 2.83 percentage points.

In addition to their views related to the pandemic, the poll asked voters about a range of other topics.

Texans also rated the job performance of Texas elected officials in the survey:

“After a bump up during the initial weeks of the pandemic, job approval ratings for public figures have been declining in most states, and Texas is no exception,” said Daron Shaw, a co-director of the poll and government professor at UT Austin. “Nationally, the president has received high marks for handling the vaccine rollout, but elected officials in Texas have been judged through the lens of the legislative session, which voters view as a mixed bag.”

When considering the proposal to make all abortions illegal after six weeks of pregnancy, Texans were divided: 44% support the idea (32% strongly, 12% somewhat), whereas 46% oppose it (37% strongly, 9% somewhat). Most Texans (53%) continue to oppose a complete ban on abortion in the state if the Supreme Court overturns Roe v. Wade (10% somewhat, 43% strongly).

In the realm of education, Texas voters were split on a proposal to limit the use of materials emphasizing racism in U.S. history by Texas public school teachers — 44% supported it (33% strongly, 11% somewhat), while 45% opposed it (34% strongly, 9% somewhat).

And earlier this month, Texas Gov. Greg Abbott signed a package of bills related to gun rights, including one that allowed persons over the age of 21 to carry without a license or training. More than half of Texas voters (57%) said they opposed it, similar to the share who said the same while the bill was being debated during April polling.

Texans report that the country is headed down the wrong track (57%), with less than a third (31%) feeling that it is headed in the right direction. These opinions are driven, in part, by what Texas voters consider the most important problems facing the country today. The top four problems noted by voters are political corruption and leadership (16%), immigration (8%), COVID-19 (8%), and the economy (8%).

Compared with the April 2021 poll, Texans’ perceptions of the economy are improving, although this depends in large part on partisanship. In total, 43% of Texans believe the national economy is worse than it was a year ago (53% offered this response in April 2021). However, when broken down by party, 61% of Democrats believe the economy is better off, compared with only 14% of Republicans.

Immigration, which is consistently listed as a top issue facing Texas in prior polls, is equally divisive. When asked how Biden has handled immigration and border security, 56% of Democrats approve and 18% disapprove, compared with 5% of Republicans approving and 89% disapproving.

The University of Texas/Texas Tribune Poll is conducted by a team of researchers from the Department of Government and the College of Liberal Arts at UT Austin in conjunction with The Texas Tribune, the nonprofit news organization. Extensive graphics, crosstabs, data sets, and analyses are featured this week on the Texas Politics Project website. 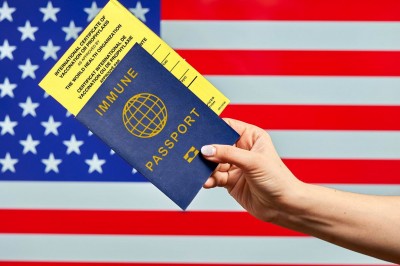 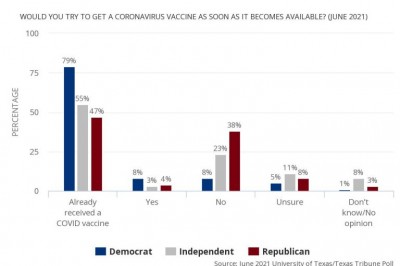 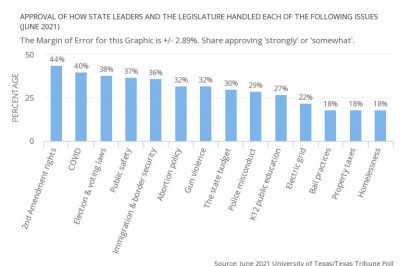