Novel approach preserved access to lung cancer screening during the COVID-19 pandemic, especially for one hospital’s largely African American patient population, and could be used to increase future access to screening 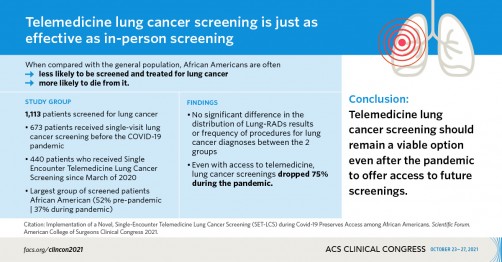 The study of virtual lung cancer screenings (LCS) was performed at Temple University Hospital,  Philadelphia, which has a large African American patient population. African Americans face disparities in care, especially for lung cancer. They are less likely to be screened and treated for lung cancer and more likely to die from it, compared with the general population, explained Jessica S. Magarinos, MD, a general surgery resident at Temple University Hospital and first author of the study. Although the authors hypothesized that LCS disparities would be exacerbated during COVID-19, this was not the case, she said.

“Our study shows that telemedicine screenings were able to reach the African American population in a safety net hospital,” Dr. Magarinos reported.

More people need to be screened for lung cancer

More people die of lung cancer every year than from any other type of cancer. Although lung cancer can be successfully treated if caught early enough, only about 3-to-6 percent of the population eligible for LCS get screened, said  Cherie P. Erkmen, MD, FACS, a thoracic surgeon at Temple University Hospital and the principal investigator for the retrospective study.

With the advent of COVID-19 pandemic, many patients—acting on advice from such scientific advisory groups such as the American College of Chest Physicians (CHEST)—decided to defer getting screened for lung cancer. The authors at Temple University in Philadelphia decided to quickly pivot to offer telemedicine lung cancer screenings, which mitigates the risk of exposure to the COVID-19 virus. Earlier this year, the ACS was one of the major health care organizations that issued a call for patients to not miss cancer screenings due to COVID-19.

For the LCS population, the authors retrospectively analyzed prospectively collected data from February 2021 and earlier; for both groups, they looked at race, smoking history, educational status, Lung-RADS®*, cancer diagnosis and stage, and adherence to follow-up using the Chi-square test and Fisher’s exact test.

The distribution of patient race before and after COVID-19 was not significantly different; in each case, the largest group of screened patients was African American (52 percent before, 37 percent after), Dr. Magarinos said. Smoking history was significantly different; 65 percent of those undergoing screening before COVID-19 were active smokers compared with 33 percent after COVID-19.

The authors concluded there was no significant difference in the distribution of Lung-RADs results (single visit vs. telemedicine):

These multiple findings led the researchers to conclude that telemedicine screening was just as effective as in-person screenings.

Dr. Erkmen hopes continued telemedicine lung cancer screenings after the pandemic will eliminate some barriers to getting screened and will result in more people getting screened.

The authors believe that telemedicine screening is applicable to other types of cancers, including breast cancer or colorectal cancer screening, said Dr. Magarinos.

There are no author disclosures to report.

About the American College of Surgeons
The American College of Surgeons is a scientific and educational association of surgeons that was founded in 1913 to raise the standards of surgical education and practice and to improve the quality of care for surgical patients. Its achievements have placed it at the forefront of American surgery and have made the College an important advocate for all surgical patients. The College has more than 84,000 members and is the largest organization of surgeons in the world. For more information, visit www.facs.org.