Brad and Alys Smith sit atop the summit of Seneca Rocks to share a video inviting people to come to West Virginia.

Through the newly named Brad and Alys Smith Outdoor Economic Development Collaborative, the donation – one of the largest in WVU’s history – will provide initial funding for a remote worker program, a groundbreaking initiative designed to help individuals and young families prosper amid the challenges of the COVID-19 pandemic.

“I truly appreciate the faith that Brad and Alys have placed in West Virginia University,” Gee said. “This exceptional investment represents a shared commitment to reshaping our state’s future, an undertaking only achievable through their generosity, trust and vision.”

As more and more people work remotely, the statewide remote worker program at WVU aims to leverage West Virginia’s outdoor assets to bring fresh talent to the Mountain State, cultivate dynamic communities, and continue to fuel the entrepreneurial and innovative thinking of West Virginia. The program will target fully employed individuals from outside the state who can work anywhere and want to be part of a contemporary, experience-driven lifestyle. Outdoor enthusiasts or young families who can help create a more diverse, inclusive and purposeful community will be given preference in a competitive application process.

Wanting to invest in the future of West Virginia and provide hope in communities that are often overlooked, the Smiths learned about the initiatives happening at WVU and were captivated by the work and potential to leverage the state’s outdoor assets to enhance economic development in West Virginia.

“West Virginia will always be home, and I see so much possibility in its natural beauty,” Brad Smith said. “With the right mix of creativity, collaboration and resources, we can take advantage of those outdoor opportunities to welcome a new generation with the capability to revitalize the state’s economy. We believe this investment will advance the state’s efforts to become the ‘Start-Up State’, a model for the rest of the nation and the world to follow.”

Gov. Jim Justice expressed his appreciation for the Smith’s donation and the efforts of WVU.

“I’d like to personally thank Brad and Alys for their generous donation and continued commitment to the state of West Virginia. I couldn’t be more proud of the work of West Virginia University. They’re doing great stuff, and I look forward to working with them to develop a remote worker program that puts West Virginia on the map as a place to live and work and showcases the best of Almost Heaven.”

Greg Corio is assistant vice president of the Smith Outdoor Economic Development Collaborative at WVU. He implements and oversees programs that fuel West Virginia’s outdoor economy and showcase the best the state has to offer.

“This gift is a tremendous opportunity to not only launch the new remote worker program, but also build on the success of our existing initiatives, including Science Adventure School and Science Behind the Sport,” Corio said. “We collaborate with colleges and units across WVU, like the John Chambers College of Business and Economics, Benjamin M. Statler College of Engineering and Mineral Resources, Davis College of Agriculture, Natural Resources and Design, WVU Medicine and WVU Extension Service, to partner with communities throughout the state to build development programs, talk about outdoor recreation opportunities, and propel entrepreneurial and innovative ideas. I can tell you that there is already a great deal of excitement about what lies ahead, and we can’t wait to illustrate the power that comes from combining the natural wonders of West Virginia with the innovative human spirit.”

The gift is being made through the WVU Foundation, the non-profit organization that solicits and administers private donations on behalf of the University.

“Private support is critical to WVU’s growth and success, and this initiative is a prime example,” Cindi Roth, president and CEO of the WVU Foundation, said. “We are so grateful to Brad and Alys for their vision and leadership. They immediately wanted to be involved with this project, and they inspired us to dream bigger. Their encouragement is leading to the development of a remarkable program with the potential to change lives.”

Brad Smith led Silicon Valley software giant Intuit for 11 years as president and CEO and now serves as executive board chairman. He and Alys, an attorney, live in California, where they work to promote education, entrepreneurship and equality through philanthropy. They have two daughters, Payton and Devon.

Brad Smith was born in Huntington and grew up in the nearby town of Kenova, where he learned the core values that contributed to his professional success. After graduating from Marshall University with a bachelor’s degree in business administration, he received his Master of Business Administration from Aquinas College in Michigan. Alys Smith graduated from The Ohio State University with a Bachelor of Arts in biology and then graduated with a law degree from the University of Akron School of Law.

Intuit thrived under Smith’s leadership, while also consistently being recognized as one of the world’s best places to work. He is ranked among the top executives in the United States by Fortune and has been described as the Mr. Rogers of business leaders, thanks to his humility and compassion. The signature building at Intuit’s headquarters campus, named for Smith as a tribute by employees, displays his motto: “Work hard. Be kind. Take Pride.”

The Smiths have been generous supporters of Marshall and Ohio State Universities, establishing named scholarship programs at both institutions. In 2018, the Smiths made a $25 million commitment to Marshall’s business college. They founded the Wing 2 Wing Foundation, whose mission is to advance education, entrepreneurship, and equal justice in regions that have been overlooked and underserved.

Brad Smith is a member of the West Virginia Business Hall of Fame.

(Find additional information on WVU’s partnership with the Smiths and the new remote worker program.) 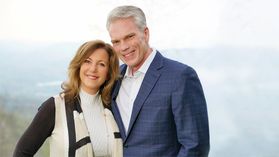 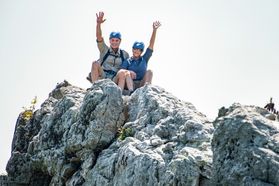 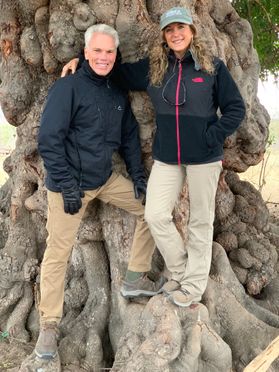