45-Year-Old Telescope Gets a Makeover to Demystify Dark Energy 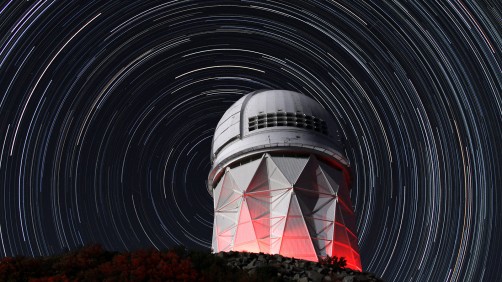 Star trails take shape around the 14-story Mayall Telescope dome in this long-exposure image. Installation of the Dark Energy Spectroscopic Instrument (DESI) will soon begin inside this dome. 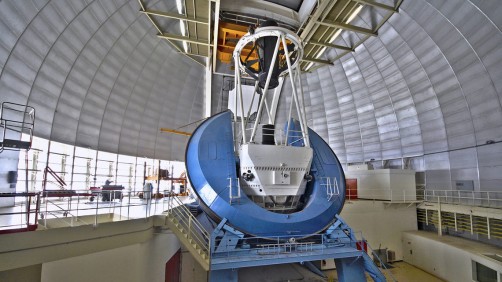 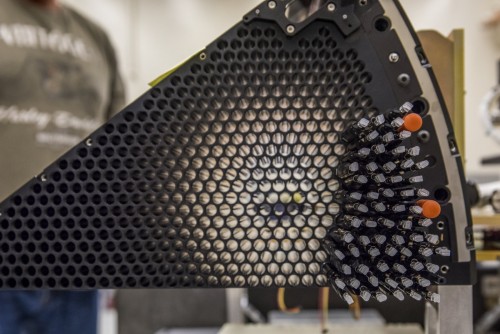 View of a partially assembled focal plane petal with an array of robotic positioners that are each connected to a fiber-optic cable. DESI will feature 10 of these petals with a total of 5,000 robots that will individually move the fiber-optic cables to gather light from specific objects in the sky. The light the cables collect will be measured in devices called spectrographs.

Newswise — Forty-five years ago this month, a telescope tucked inside a 14-story, 500-ton dome atop a mile-high peak in Arizona took in the night sky for the first time and recorded its observations on glass photographic plates. Today, the dome closes on the previous science chapters of the 4-meter Nicholas U. Mayall Telescope and starts preparing for its new role in creating the largest 3-D map of the universe. This map could help determine why the universe is expanding at faster and faster rates, driven by an unknown force called dark energy.

The temporary closure sets in motion the largest overhaul in the telescope’s history and sets the stage for the installation of the Dark Energy Spectroscopic Instrument (DESI), which will begin a five-year observing run next year at the Kitt Peak National Observatory in Tucson, Arizona.

“This day marks an enormous milestone for us,” said DESI Director Michael Levi of the Department of Energy’s Lawrence Berkeley National Laboratory, which is leading the project’s international collaboration. “Now we remove the old equipment and start the yearlong process of putting the new stuff on.” More than 465 researchers from 71 institutions are participating in the DESI collaboration.

“Installing DESI on the Mayall will put the telescope at the heart of the next decade of discoveries in cosmology,” said DESI collaboration spokesperson Risa Wechsler, an associate professor of physics and astrophysics at DOE’s SLAC National Accelerator Laboratory and Stanford University. “The amazing 3-D map it will create may solve some of the biggest outstanding questions in cosmology, or surprise us and bring up new ones.”

Besides providing new insights about the universe’s expansion and large-scale structure, DESI will also help set limits on theories related to gravity and the formative stages of the universe, and could even provide new mass measurements for a variety of elusive yet abundant subatomic particles called neutrinos.

“One of the primary ways that we learn about the unseen universe is by its subtle effects on the clustering of galaxies,” said DESI collaboration spokesperson Daniel Eisenstein of Harvard University. “The new maps from DESI will provide an exquisite new level of sensitivity in our study of cosmology.”

The Mayall Telescope has played an important role in many astrophysics discoveries, including measurements supporting the discovery of dark energy and measurements of galaxy rotation that established the role of dark matter in the universe. Its observations have also been used in determining the scale and structure of the universe. Dark matter and dark energy are together believed to make up about 95 percent of all of the universe’s mass and energy.

It was one of the world’s largest optical telescopes at the time it was built, and because of its sturdy construction it is perfectly suited to carry the new 9-ton instrument.

“We started this project by surveying large telescopes to find one that had a suitable mirror and wouldn’t collapse under the weight of such a massive instrument,” said Berkeley Lab’s David Schlegel, a DESI project scientist.

The entire top end of the telescope, which is as heavy as a school bus and houses the telescope’s secondary mirror and a large digital camera, will now be removed and replaced with DESI instruments.

DESI will scan one-third of the sky and will capture about 10 times more data than a predecessor survey, the Baryon Oscillation Spectroscopic Survey (BOSS).

The new instrument will use an array of 5,000 swiveling robots, each carefully choreographed to point a fiber-optic cable at a preprogrammed sequence of deep-space objects, including millions of galaxies and quasars, which are galaxies that harbor massive, actively feeding black holes. The fiber-optic cables will carry the light from these objects to 10 spectrographs, which will measure the properties of this light and help pinpoint how far away the objects are and how fast they are moving away from us. DESI’s observations will provide a deep look into the early universe, back to about 11 billion years ago.

Astrophysicists Kevin Reil and Aaron Roodman from the Kavli Institute for Particle Astrophysics and Cosmology (KIPAC), a joint institute of SLAC and Stanford, were involved in developing another key component of DESI.

“The instrument will feature small imaging cameras on the edge of the fiber array,” Roodman said. “They’ll let us guide the telescope and optimally focus and align the DESI corrector – an active optics capability that will help us get the best performance for the exciting science to be done with this innovative instrument.”

The Mayall Telescope has most recently been enlisted in a DESI-supporting sky survey known as the Mayall z-Band Legacy Survey (MzLS), one of four sky surveys DESI will use to preselect the objects it will target in the sky.

“We can see about a billion galaxies in the survey images, which is quite a bit of fun to explore,” Schlegel said. “The DESI instrument will precisely measure millions of those galaxies to see the effects of dark energy.”

Installation of DESI’s components is expected to begin soon and to wrap up in April 2019, with first science observations planned in September 2019.

DESI is supported by the Department of Energy Office of Science; the National Science Foundation; the Science and Technologies Facilities Council of the United Kingdom; the Gordon and Betty Moore Foundation; the Heising-Simons Foundation; the National Council of Science and Technology of Mexico; the Ministry of Economy of Spain; and DESI member institutions. The DESI scientists are honored to be permitted to conduct research on Iolkam Du’ag (Kitt Peak), a mountain with particular significance to the Tohono O’odham Nation. For more information on DESI and its member institutions, visit desi.lbl.gov.

Editor’s note: This feature is based on a press release by Berkeley Lab. 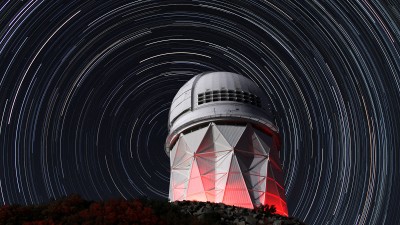 Caption: Star trails take shape around the 14-story Mayall Telescope dome in this long-exposure image. Installation of the Dark Energy Spectroscopic Instrument (DESI) will soon begin inside this dome. 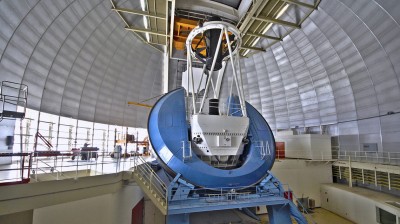 Caption: This 2-meter-tall corrector barrel was used for imaging in previous surveys at the Mayall Telescope. A new corrector barrel will replace this one and perform spectroscopic surveys for the DESI project. 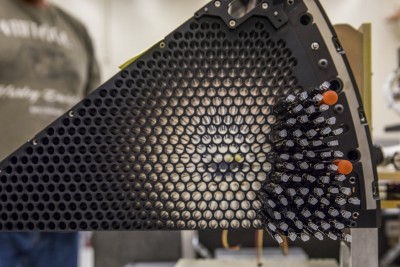 Caption: View of a partially assembled focal plane petal with an array of robotic positioners that are each connected to a fiber-optic cable. DESI will feature 10 of these petals with a total of 5,000 robots that will individually move the fiber-optic cables to gather light from specific objects in the sky. The light the cables collect will be measured in devices called spectrographs.