Scientists surprised by discovery that copper embedded in carbon nano-spikes can turn carbon dioxide into ethanol. 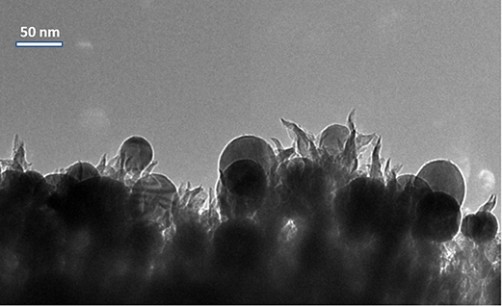 Cloudy or still days mean energy production drops at solar panels or wind farms. Scientists at Oak Ridge National Laboratory developed a new process that could change this situation. They found that tiny spikes of carbon combined with copper particles convert carbon dioxide into ethanol fuel. The catalysts take a waste product of coal used in power plants and other hydrocarbon combustion reactions, in the presence of electrical energy, and create liquid fuel. Their finding was a surprise. They had been studying only the first step of a reaction and realized the catalyst was orchestrating the entire reaction, converting dissolved carbon dioxide to ethanol with a 63 percent yield.

The catalyst achieved unprecedented selectivity for ethanol in a complex reaction. This is noteworthy because the reaction typically yields several products in small amounts. Moreover, it showed that the catalyst’s nanometer-scale texture can control the outcome of chemical reactions. The discovery offers a strategy for making certain chemical reactions possible without using expensive or rare metal catalysts, such as platinum. It may offer a new route for storing—in the form of the chemical ethanol—electrical energy. This could benefit wind and solar stations that produce energy only when wind is blowing or sun is shining.

Researchers arranged common materials in a catalyst containing nano-spikes of carbon and nitrogen embedded with copper nanoparticles. When this catalyst was used to electrochemically reduce carbon dioxide—i.e., use electricity to convert a waste product of hydrocarbon combustion back into a hydrocarbon fuel—they were surprised they directly made ethanol, a more valuable fuel than the methanol that they anticipated. It turns out that active sites within these nanostructures work in tandem to complete a complex chemical reaction instead of the simpler reaction that was expected. At the same time, this nanocatalyst was highly selective, producing fewer byproducts than other catalysts. While the researchers have not fully determined the energy efficiency of the process, they showed that if 100 electrons were pushed across the catalyst and reacted, then 63 would be eventually stored as ethanol fuel. Or, 100 molecules of carbon dioxide would produce 84 carbon atoms in ethanol. Because these nanostructured catalysts employ low-cost materials and can run at room temperature, scaling the reaction for industrial applications is possible. One exciting prospect is chemically storing energy from renewable but intermittent power sources.

This material is based upon work supported by the U.S. Department of Energy (DOE), Office of Science, Basic Energy Sciences, and conducted at the Center for Nanophase Materials Sciences, which is a DOE Office of Science user facility.