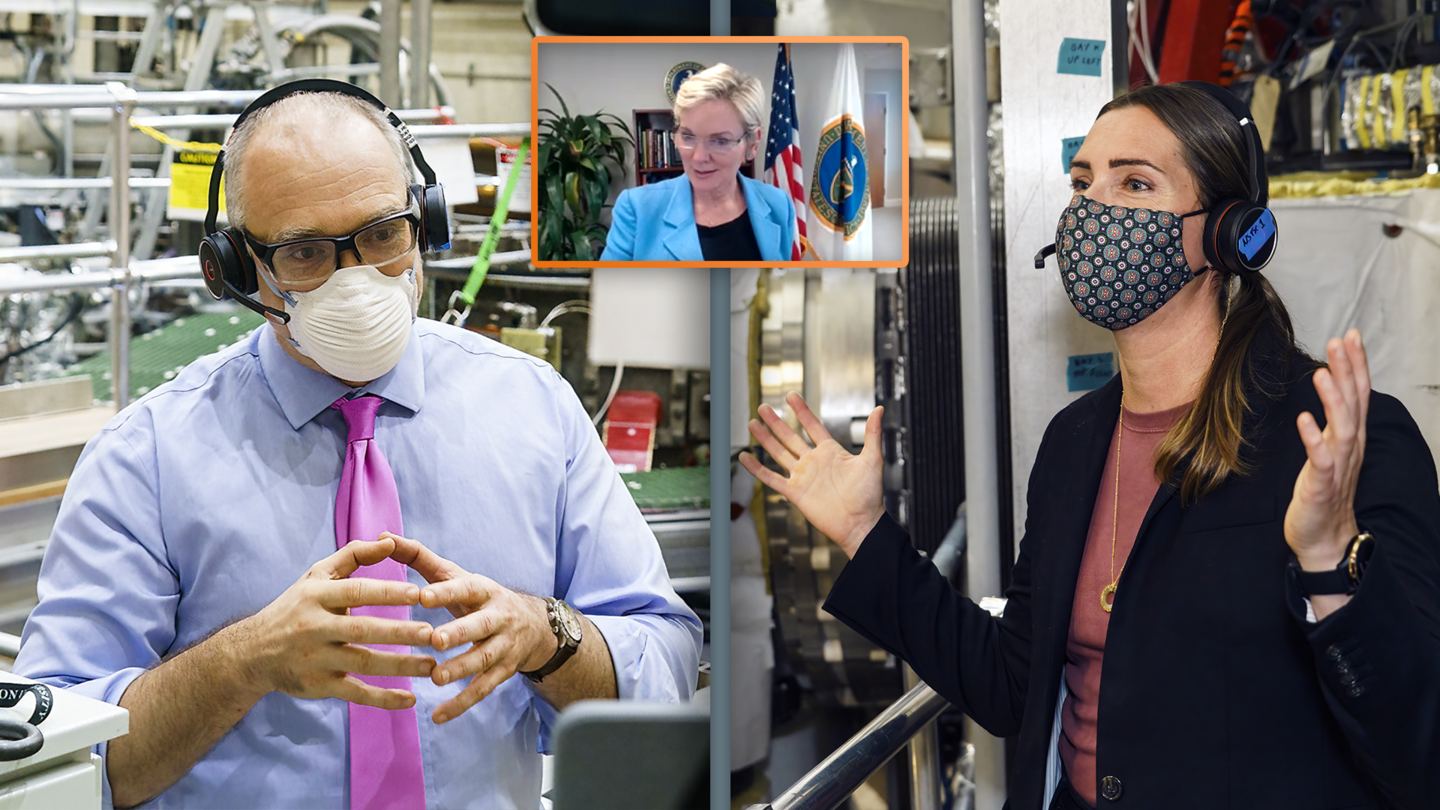 “Cracking that code is really such a critical mission and you and your collaborators in the U.S. and abroad have made incredible progress on that front,” Granholm told more than 500 staff members at an all-hands meeting Oct. 29. “President Biden and I and everyone in the leadership ranks at the DOE are here to support you.”

Granholm made the remarks during the virtual visit in which she met with staff, answered questions, and took a virtual tour of the Laboratory that included PPPL’s flagship experiment, the National Spherical Torus Experiment-Upgrade (NSTX-U). She also heard about PPPL’s expanded research directions exploring plasma science applications in microelectronics and sustainability and employing advanced computing for research into everything from astrophysics to concepts for a plasma-based rocket thruster.

Putting out the welcome mat

Steve Cowley, Laboratory director, literally put out the welcome mat for Secretary Granholm, live-streaming his opening remarks from the welcome mat at the front door of PPPL’s main administration building, the Lyman Spitzer Building. He applauded President Biden and Secretary Granholm’s goal of achieving net zero carbon emissions by 2050. “Your personal commitment toward this agenda is clear and inspiring and it resonates deeply with the mission of this laboratory and the mission of many of our lives,” Cowley said.

Princeton University President Christopher L. Eisgruber welcomed Granholm and said that PPPL’s success is a key priority for the University. “We believe that the Princeton Plasma Physics Laboratory’s outstanding scientific work is crucial to this nation’s energy future and to tackling critical ecological and environmental challenges,” he said.

Granholm said President Biden realizes the threat to the U.S. posed by climate change. “It’s why he’s set these ambitious goals to cut our emissions in half by 2030 and 100 percent clean power by 2035 and net zero emissions by 2050. He’s relying on DOE, which I always brag about us is America’s solutions department.”

Granholm said the DOE is also encouraging innovation through programs like the Innovation Network for Fusion Energy, a DOE-funded program co-led by PPPL’s Ahmed Diallo with Oak Ridge National Laboratory that provides funding for fusion energy research to private companies partnering with national laboratories. PPPL is partnering with three of 10 of the projects this year. (See story here).

Granholm also noted PPPL’s new research mission to employ low-temperature plasmas in semiconductor manufacturing and microelectronics of the future. Research at national laboratories is “a powerful incentive for our friends in the industries to work with us right here in America to develop the next generation of technologies that are going to enable advances in everything from computing to power generation to communications,” she said.

David Graves, PPPL’s associate laboratory director for low-temperature plasma surface interactions, described to Granholm how low-temperature plasmas use nanofabrication to produce computer chips and will likely be used in future microelectronics such as quantum computing. “There’s a considerable interest in starting to bring chip manufacturing back to the U.S.,” Graves said.

Learning about spherical tokamaks and other fusion devices

Led by Cowley, Granholm’s first stop on the virtual tour was a discussion by Jon Menard, deputy director for research and chief science officer, on PPPL’s role in research aimed at the next step in developing fusion energy in the U.S.: building a fusion pilot plant. “Fusion needs to demonstrate net electricity as soon as possible,” Menard said. Spherical tokamaks, like PPPL’s flagship experiment, the NSTX-U, could provide a smaller and more affordable alternative for future fusion devices, Menard said.

Granholm got a virtual view of the experiment on the virtual tour. Stefan Gerhardt, deputy director for the NSTX-U Recovery Project, explained how an ionized gas called a plasma can be heated to more than 50 million degrees in a fraction of a second in the device. He noted that more than 300 researchers from around the world will do research at the facility, which will also support research relevant to the international fusion facility ITER under construction in France. “We can make a lot of key discoveries here,” he said.

David Gates, head of Advanced Projects, discussed research on another type of fusion device called a stellarator. Stellarators have twisted magnetic coils that can produce a steady-state magnetic field, but their complex design make can them difficult and potentially costly to build. PPPL physicists are researching whether permanent magnets, more powerful versions of the kind of magnets used to hang children’s artwork on refrigerators, could provide a simpler and more affordable way to build the devices.

Discussions with a technician and early-career scientists

Granholm met three young people involved in programs at PPPL aimed at training the next generation of scientists and technicians. Laura (Xin) Zhang, a sixth-year graduate student, recounted how she became interested in fusion energy as a potential solution to climate change. “It’s carbon free and it’s also pollution-free,” she said. Amelia Chambliss, a former intern who worked at PPPL through the DOE’s Office of Workforce Development Science Undergraduate Laboratory Internship (SULI) program, said she decided she wanted to become a researcher through the program and is now applying to graduate school. Sean Hough, a technical apprentice, described his work as an electronics apprentice in the four-year program, which provides full-time work and technical training. “I believe the world needs PPPL to realize fusion as a viable source of energy that would solve many of our problems,” Hough said. “Working toward that goal is something I can be proud of.”

Bill Dorland, associate laboratory director for computation, described to Granholm how scientists are using supercomputers to understand astrophysical phenomena like black holes and pulsars. He was joined by physicist Fatima Ebrahimi who discussed her concept of a plasma-based rocket thruster that could bring the outer planets within reach of astronauts.

Granholm also got a glimpse of PPPL’s laboratory of the future. PPPL has plans to build its first new building in decades, the Princeton Plasma Innovation Center, which will include laboratory space for microelectronics and other new research areas. “This building will be a game changer,” said Sam Rozycki, project director in the Project Management Office.

The tour ended with an overview by Emily Carter, PPPL’s new senior strategic advisor for sustainability science, of PPPL’s focus on sustainability and plasma sciences. One example of this research is that low-temperature plasmas combined with catalyst particles could be used to convert natural gas into hydrogen and carbon nanotubes that could be used as building materials. “It’s a negative emissions technology with an economic driver,” Carter said. “This is just the start of what’s possible.”

“This is so mind-blowing,” Secretary Granholm said at the conclusion of the tour. “I’m so grateful that you’ve pulled together this incredible team – both for the presentations, but also to make these discoveries and activities happen so we can save our planet.”

“I want to thank Secretary Granholm for coming to PPPL on this virtual visit,” Cowley said. “This is an exciting time at PPPL and we’re looking forward to having her come visit us in person sometime soon.”

PPPL, on Princeton University's Forrestal Campus in Plainsboro, N.J., is devoted to creating new knowledge about the physics of plasmas — ultra-hot, charged gases — and to developing practical solutions for the creation of fusion energy. The Laboratory is managed by the University for the U.S. Department of Energy’s Office of Science, which is the largest single supporter of basic research in the physical sciences in the United States and is working to address some of the most pressing challenges of our time. For more information, please visit science.energy.gov.