A Nanowire Array to Screen Drugs for Neurodegenerative Diseases

Engineers develop wires that penetrate neurons and measure their activity 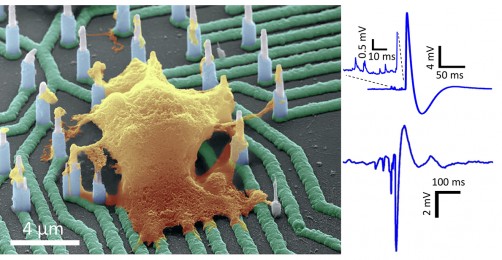 A human-induced pluripotent stem cell (hiPSC) neuron on a nanowire array. The measured potentials on the right with the small pre-spike oscillations demonstrate the sensitivity of the Nano Assay to minute potential changes in the hiPSC neuron. These small potential changes correlate with the health state of the neuron cell.

Using resources at the Center for Integrated Nanotechnologies (CINT), a team built tiny wires that can record the electrical activity of neurons in fine detail. The small-diameter wires penetrated the neuron cells. Once inside, the wires let scientists measure minute changes in the cells during normal and drug-modified activity. The new technology could one day serve as a platform to screen drugs for Alzheimer’s and other neurological diseases. It could also enable researchers to better see how single cells communicate in large “mini-brain” networks.

The new assay offers insights to the physiological state of individual neurons in large networks that can potentially form mini-brains. This physiological state provides details about how neurons interact together and how they respond to drugs in dysfunctional or impaired networks. One of the team’s goals is to use the platform to replicate and modify diseased networks, such as in Alzheimer’s. They are also working to discover new drug therapies to battle neurodegenerative diseases.

Nanowire geometries are ideal for interfacing with cells and measuring intracellular potentials of neurons with minimal invasiveness. This is particularly important for interfaces with human neurons to accelerate drug screening and development. The team developed a new hybrid integration scheme that offers, for the first time, a nanowire-on-lead approach. The approach enables independent electrical addressability, is scalable, and has superior spatial resolution in vertical nanowire arrays. The team is from the University of California San Diego, the Sanford Burnham Prebys Medical Discovery Institute, and the Center for Integrated Nanotechnologies (CINT), a Department of Energy Office of Science user facility at Los Alamos National Laboratory and Sandia National Laboratories. The team demonstrated the fabrication of these nanowire arrays to be scalable down to submicrometer site-to-site spacing. Further, the arrays can be combined with standard integrated circuit fabrication technologies. The team utilized these arrays to perform electrophysiological recordings from mouse and rat primary neurons and human-induced pluripotent stem cell (hiPSC) derived neurons. The recordings revealed high signal-to-noise ratios and sensitivity to subthreshold potentials that are likely generated by quantal release of neurotransmitters. This platform paves the way for longitudinal electrophysiological experiments on synaptic activity in hiPSC-based disease models of neuronal networks, critical for the development of drugs for neurological diseases.

This work was supported by a National Science Foundation Faculty Early Career Development (CAREER) Program award, Center for Brain Activity Mapping at University of California, San Diego (UCSD), a Calit2 Strategic Research Opportunities award from the Qualcomm Institute at UCSD, a Laboratory Directed Research and Development (LDRD) Exploratory Research Award from Los Alamos National Laboratory, the National Institutes of Health, a March of Dimes award, and a UCSD Frontiers of Innovation Scholar Program award. The LDRD work was performed, in part, at the Center for Integrated Nanotechnologies, an Office of Science user facility operated for the Department of Energy Office of Science.