Researchers discover they contain a phase of quantum matter, known as charge density waves, that’s common in other unconventional superconductors. In other ways, though, they’re surprisingly unique.

An illustration shows a type of quantum matter called charge density waves, or CDWs, superimposed on the atomic structure of a nickel oxide superconductor discovered three years ago at SLAC and Stanford. (Bottom) The nickel oxide material, with nickel atoms in orange and oxygen atoms in red. (Top left) CDWs appear as a pattern of frozen electron ripples, with a higher density of electrons in the peaks of the ripples and a lower density of electrons in the troughs. (Top right) This area depicts another quantum state, superconductivity, which can also emerge in the nickel oxide. The presence of CDWs shows that nickel oxides are capable of forming correlated states – “electron soups” that can host a variety of quantum phases, including superconductivity. 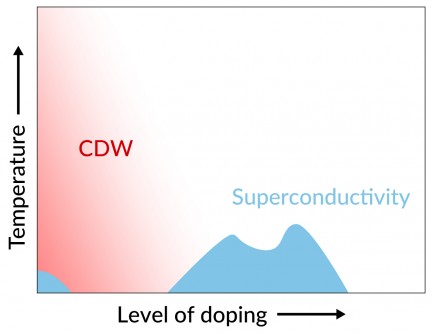 This graph shows what happens inside a nickel oxide material when scientists tweak its temperature and level of doping – replacing some atoms with others to change the number of electrons that can move around. When conditions are just right, the material’s electrons lose their individual identities and form an electron soup, and quantum states such as superconductivity (blue) and charge density waves (CDWs, in red) emerge.

Newswise — A new study shows that nickel oxide superconductors, which conduct electricity with no loss at higher temperatures than conventional superconductors do, contain a type of quantum matter called charge density waves, or CDWs, that can accompany superconductivity.

The presence of CDWs shows that these recently discovered materials, also known as nickelates, are capable of forming correlated states – “electron soups” that can host a variety of quantum phases, including superconductivity, researchers from the Department of Energy’s SLAC National Accelerator Laboratory and Stanford University reported in Nature Physics today.

“Unlike in any other superconductor we know about, CDWs appear even before we dope the material by replacing some atoms with others to change the number of electrons that are free to move around,” said Wei-Sheng Lee, a SLAC lead scientist and  investigator with the Stanford Institute for Materials and Energy Science (SIMES) who led the study.

“This makes the nickelates a very interesting new system – a new playground for studying unconventional superconductors.”

In the 35 years since the first unconventional “high-temperature” superconductors were discovered, researchers have been racing to find one that could carry electricity with no loss at close to room temperature. This would be a revolutionary development, allowing things like perfectly efficient power lines, maglev trains and a host of other futuristic, energy-saving technologies.

But while a vigorous global research effort has pinned down many aspects of their nature and behavior, people still don’t know exactly how these materials become superconducting.

So the discovery of nickelate’s superconducting powers by SIMES investigators three years ago was exciting because it gave scientists a fresh perspective on the problem.

Since then, SIMES researchers have explored the nickelates’ superconductor.aspx">electronic structure – basically the way their electrons behave – and magnetic behavior. These studies turned up important similarities and subtle differences between nickelates and the copper oxides or cuprates – the first high-temperature superconductors ever discovered and still the world record holders for high-temperature operation at everyday pressures.

Since nickel and copper sit right next to each other on the periodic table of the elements, scientists were not surprised to see a kinship there, and in fact had suspected that nickelates might make good superconductors. But it turned out to be extraordinarily difficult to construct materials with just the right characteristics.

“This is still very new,” Lee said. “People are still struggling to synthesize thin films of these materials and understand how different conditions can affect the underlying microscopic mechanisms related to superconductivity.”

As researchers adjust the material’s temperature and level of doping, various states emerge and fade away. When conditions are just right, the material’s electrons lose their individual identities and form an electron soup, and quantum states such as superconductivity and CDWs can emerge.

“The emergence of CDWs can be very sensitive to things like strain or disorder in their  surroundings, which can be tuned by using different rare-earth elements,” explained  Matteo Rossi, who led the experiments while a postdoctoral researcher at SLAC.

The team carried out experiments at three X-ray light sources – the Diamond Light Source in the UK, the Stanford Synchrotron Radiation Lightsource at SLAC and the Advanced Light Source at DOE’s Lawrence Berkeley National Laboratory. Each of these facilities offered specialized tools for probing and understanding the material at a fundamental level. All the experiments had to be carried out remotely because of pandemic restrictions.

The experiments showed that this nickelate could host both CDWs and superconducting states of matter – and that these states were present even before the material was doped. This was surprising, because doping is usually an essential part of getting materials to superconduct.

Lee said the fact that this nickelate is essentially self-doping makes it significantly different from the cuprates.

“This makes nickelates a very interesting new system for studying how these quantum phases compete or intertwine with each other,” he said. “And it means a lot of tools that are used to study other unconventional superconductors may be relevant to this one, too.”

SLAC is operated by Stanford University for the U.S. Department of Energy Office of Science. The Office of Science is the single largest supporter of basic research in the physical sciences in the United States and is working to address some of the most pressing challenges of our time.