A New Paradigm in Parachute Design 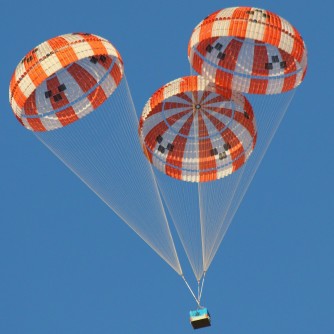 This array of parachutes, designed for NASA’s Orion spacecraft, is seen here during a test above Eloy, Ariz., in 2015. Several parachute designs for Orion have also been tested in NASA wind tunnels. 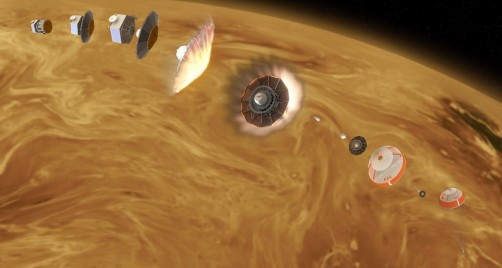 This artistic rendering shows a parachute system and other stages in a next-generation space mission that incorporates a large, flexible heat shield.

Francesco Panerai holds a sample of parachute material at NASA Ames Research Center. The screen display shows a parachute prototype (left) and a magnified patch of the material at right.

Newswise — As skydivers well know, it’s a good idea to look before you leap -- and to pack a trusty parachute, too. A weighty spacecraft zooming toward a planet’s surface at several miles per second will, after enduring a superhot atmospheric entry, also benefit from careful planning and a reliable parachute.

NASA has used parachutes for many interplanetary missions, and has largely relied on wind-tunnel and airborne drop tests to study their performance.

NASA successfully landed the 1-ton Curiosity rover on Mars in 2012 using a 19.7-meter-wide parachute in combination with rockets and a “sky crane” system to lower the rover from the spacecraft that carried it. As mission designers continue to push toward even heavier robotic payloads, parachute materials will be pushed to their limits.

The first atmospheric tests of 30-meter-wide prototype supersonic parachutes developed by NASA’s Jet Propulsion Laboratory (JPL) suffered dramatic failures in 2014 and 2015. While NASA is exploring a range of systems to decelerate spacecraft, including rockets and inflatables that can lessen the strain on the parachute, the agency is also seeking to improve parachute designs to handle heavier loads and more extreme stressors.

Harold Barnard, a scientist at Berkeley Lab’s ALS, is developing a test chamber to simulate the strain that parachutes will undergo during atmospheric descent. This chamber can be used with X-rays to capture the 3-D structure of parachute materials as strain is applied.

With this technique, Barnard said, “We can stretch the material while we are simultaneously scanning it. We can watch the fibers tighten and the pores react.”

The X-ray technique has provided the best measures yet of this porous structure, or porosity, in parachute materials at tiny scales, said Francesco Panerai, a scientist with AMA Inc. at NASA ARC who is collaborating with Berkeley Lab researchers in this effort.

“It’s very difficult to measure the right porosity.” He said there are plans over the next couple of years to test next-generation parachute materials at the ALS that could be used in upcoming human and robotic missions.

Another test chamber that Barnard is building, which doesn’t require X-rays, incorporates several pistons that can push against larger samples of parachute materials at different levels of tension while gases are blown through it. This can be used to measure the material’s permeability, or the ability of gases to push through it.

Michael Barnhardt, a senior research scientist at NASA ARC and principal investigator of the Entry Systems Modeling Project, said the X-ray research can play an important role in visualizing the fundamental structure of parachute fabrics, in building and fine-tuning fabric models, and in selecting the best material for the job.

“We’d like to have confidence the parachute is going to work every time,” he said.

Learn more about the research partnership between NASA and Berkeley Lab in these articles:

Lawrence Berkeley National Laboratory addresses the world’s most urgent scientific challenges by advancing sustainable energy, protecting human health, creating new materials, and revealing the origin and fate of the universe. Founded in 1931, Berkeley Lab’s scientific expertise has been recognized with 13 Nobel Prizes. The University of California manages Berkeley Lab for the U.S. Department of Energy’s Office of Science. For more, visit http://www.lbl.gov (http://www.lbl.gov).

DOE’s Office of Science is the single largest supporter of basic research in the physical sciences in the United States, and is working to address some of the most pressing challenges of our time. For more information, please visit science.energy.gov (http://www.science.energy.gov). 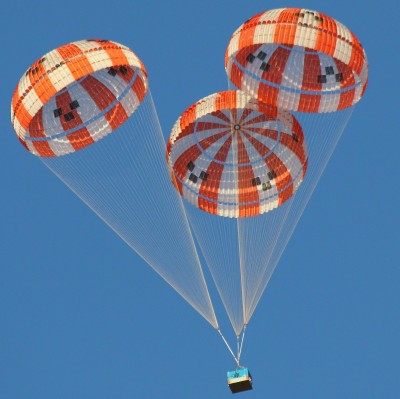 Caption: This array of parachutes, designed for NASA’s Orion spacecraft, is seen here during a test above Eloy, Ariz., in 2015. Several parachute designs for Orion have also been tested in NASA wind tunnels. 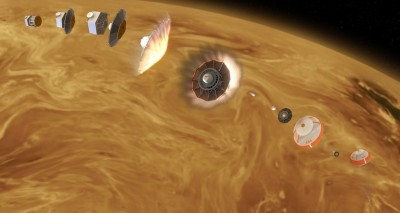 Caption: This artistic rendering shows a parachute system and other stages in a next-generation space mission that incorporates a large, flexible heat shield.

Caption: Francesco Panerai holds a sample of parachute material at NASA Ames Research Center. The screen display shows a parachute prototype (left) and a magnified patch of the material at right.