A New Recipe for Biofuel: Genetic Diversity Can Lead to More Productive Growth in Switchgrass Crops 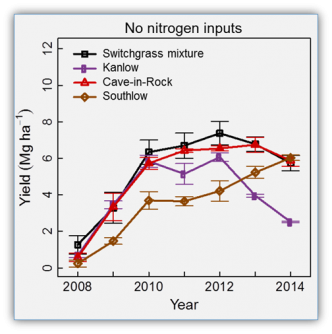 This plot shows the yields of three switchgrass varieties, or cultivars—Kanlow, Cave-in-Rock and Southlow—and a mixture of the three. The mixture is either the highest yielding or approximately equal to the highest yielding crop each year, closely following the Southlow crop in 2014. These measurements are from plots without added fertilizer (nitrogen inputs). 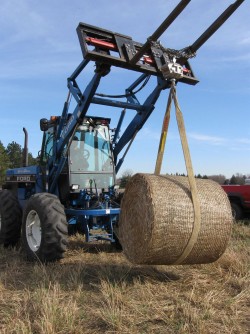 A bale of switchgrass is weighed after harvesting. The dry weight of the harvested switchgrass allowed Argonne researchers and collaborators to measure the yield of a mixture compared to yields of single varieties grown in isolation. The mixture sustained the highest overall yields over the course of the seven-year study.

A new recipe for biofuel: Genetic diversity can lead to more productive growth in switchgrass crops

Newswise — Before farmers settled the Midwestern United States and planted crops, the extensive root systems of prairie grasses—including the tall, strong-stemmed switchgrass species—enriched the soil, creating millions of acres of prime farmland. Today, scientists are exploring how grasses, and switchgrass in particular, can enrich the nation’s biofuel supply, which is currently dominated by corn, a crop relatively easy to convert to biofuel but also in demand for food, livestock feed and industrial products.

There are many benefits to growing switchgrass. It is a native crop that grows in a range of climates across a wide swath of the United States; it is easy to maintain because, unlike corn, it doesn’t need to be re-seeded every year; it is relatively resistant to disease and weather extremes; and it can be planted and harvested with commercial haying equipment.

But converting the tough lignocellulose in switchgrass cell walls into biofuels like ethanol (an additive to gasoline and one of the most common biofuels in the United States) is more difficult than converting the starch in corn. As a result, switchgrass research has largely focused on how to efficiently process it once it reaches a biorefinery.

However, a team of national laboratory and university researchers led by the U.S. Department of Energy’s (DOE’s) Argonne National Laboratory is exploring the other side of the production cycle: the farm. The team is growing large test plots of switchgrass crops with the farmer in mind. For the first time, researchers have mixed different genetic varieties of switchgrass on production-size plots, hypothesizing this could increase yield by extending the growing season, varying the size of the switchgrass plants to produce a fuller crop and potentially reducing the crop’s vulnerability to weather fluctuations.

The results of a seven-year study of these plots have been published in Global Change Biology–Bioenergy. The project was funded by the DOE Office of Science with support from the Argonne/UChicago Energy Initiative and grants from the United States Department of Agriculture.

“This project addresses the ecological component of bioenergy research” said Julie Jastrow, Argonne senior terrestrial ecologist. "In other words, how do you sustain yields in the field while minimizing fertilizer and pesticide use?"

From the farmer’s perspective, it can be easy to overlook the benefits of switchgrass. Over time, commercial crops like corn have been selectively bred for high-productivity, improved response to fertilizers and efficient harvesting. Whereas, switchgrass is a wild grass mostly used for forage or soil restoration. Switchgrass is also slower to establish. Up front it can take three to four years for a crop to reach its most productive yields—in part, because switchgrass invests much of its initial energy developing a large root system that later minimizes the need for added fertilizer or water.

Previous studies have looked at the advantage of growing several species of prairie grass in the same plot. Species diversity is often an ecological strength, promoting growth and protecting a plant population from insect damage, pathogen build-up and weather highs and lows. However, it’s easier to process a single species into ethanol, so the team wanted to find other ways of boosting productivity within the switchgrass species.

“Switchgrass has a wide distribution across the country, and there is still a lot of genetic diversity in switchgrass,” Jastrow said. “And the different varieties have different traits. The southern varieties are taller with bigger leaves and stems, but they are less dense and grow fewer stems per square meter. The northern varieties are smaller but produce more stems.” The stems are the primary source of lignocellulose harvested for biofuel.

Varieties also have slightly different growing seasons based on the amount of daily sunlight and the arrival of hot, summer temperatures in their native regions.

The team also grew a mixture of the three cultivars to test their theory that genetic variation would promote growth. Beginning in the second year, the plots were annually harvested by a local farmer, and the bales from each plot were weighed to measure yield.

“The experiment was managed just as a farmer would manage a hayfield,” said Geoff Morris, assistant professor of crop genetics at Kansas State University and lead author of the GCB–Bioenergy paper. “Our goal was to make the results as transferable as possible to a real production system.”

While there was no formal method in place to study yield in relation to weather extremes, the crops were grown under some exceptional weather conditions. The area saw its wettest year on record in 2008, an historic drought and higher than normal summer temperatures in 2012 and unusually cold winters in 2009 and 2014.

“Despite the weather fluctuations, the cultivar mixture consistently produced yields equal to or greater than the best performing single cultivars,” Jastrow said.

The cultivar mixture was, most consistently, the highest yielding crop, as measured by the harvested dry weight from each plot. Although the cold-adapted Southlow cultivar from Michigan was slightly higher yielding following the cold winter of 2014, it was the lowest yielding the first five years, demonstrating that, at least within the parameters of the study, increasing genetic diversity by planting a mixture of cultivars is the quickest way to establish a crop and sustain the highest overall yields.

Argonne National Laboratory seeks solutions to pressing national problems in science and technology. The nation's first national laboratory, Argonne conducts leading-edge basic and applied scientific research in virtually every scientific discipline. Argonne researchers work closely with researchers from hundreds of companies, universities, and federal, state and municipal agencies to help them solve their specific problems, advance America's scientific leadership and prepare the nation for a better future. With employees from more than 60 nations, Argonne is managed by UChicago Argonne, LLC for the U.S. Department of Energy's Office of Science.The Office of Science is the single largest supporter of basic research in the physical sciences in the United States and is working to address some of the most pressing challenges of our time. For more information, visit the Office of Science website. 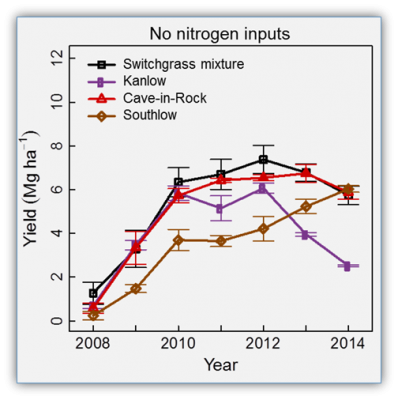 Caption: This plot shows the yields of three switchgrass varieties, or cultivars—Kanlow, Cave-in-Rock and Southlow—and a mixture of the three. The mixture is either the highest yielding or approximately equal to the highest yielding crop each year, closely following the Southlow crop in 2014. These measurements are from plots without added fertilizer (nitrogen inputs). 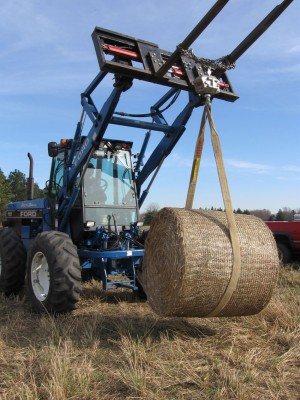 Caption: A bale of switchgrass is weighed after harvesting. The dry weight of the harvested switchgrass allowed Argonne researchers and collaborators to measure the yield of a mixture compared to yields of single varieties grown in isolation. The mixture sustained the highest overall yields over the course of the seven-year study.