A New Way to Display the 3-D Structure of Molecules 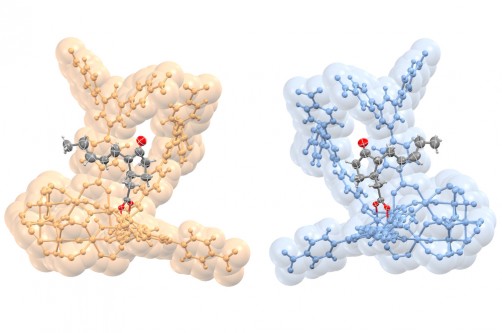 Mirror, mirror: This rendering shows opposite configurations in the molecular structure of a plant hormone called jasmonic acid (gray and red) that are bound to nanostructures (gold and blue) called MOFs, or metal-organic frameworks. 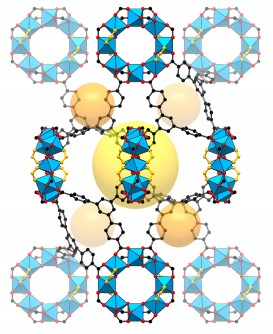 This illustration shows the structure of a nanostructure known as a metal-organic framework or MOF. The structure possesses a handedness (like a right-handed vs. left-handed person), known as “chirality,” that enables researchers to identify the same kind of handedness in molecules that bind within it. 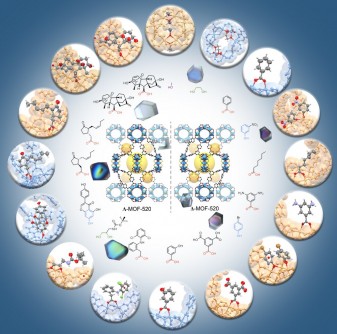 This illustration shows the structure of 16 molecules that were studied while bound to metal-organic frameworks (MOFs) that exhibit handedness. The frameworks stabilized the molecules for study with X-rays.

Their work, published online Aug. 18 in the journal Science, could help to reveal new structural details for a range of challenging molecules -- including complex chemical compounds and potentially new drugs -- by stabilizing them inside sturdy structures known as metal-organic frameworks (MOFs).

The researchers introduced a series of different molecules that were chemically bound inside these porous MOFs, each measuring about 100 millionths of a meter across, and then used X-ray techniques to determine the precise molecular structure of the samples inside the MOFs.

The samples ranged from a simple alcohol to a complex plant hormone, and the new method, dubbed “CAL” for covalent alignment (the molecules form a type of chemical bond known as a covalent bond in the MOFs), enables researchers to determine the complete structure of a molecule from a single MOF crystal that contains the sample molecules in its pores.

The MOFs in the study, which are identical and are easy to manufacture in large numbers, provided a sort of backbone for the sample molecules that held them still for the X-ray studies -- the molecules otherwise can be wobbly and difficult to stabilize. The researchers prepared the samples by dipping the MOFs into solutions containing different molecular mixes and then heating them until they crystallized.

“We wanted to demonstrate that any of these molecules, no matter how complex, can be incorporated and their structure determined inside the MOFs,” said Omar Yaghi, a materials scientist at Berkeley Lab and chemistry professor at UC Berkeley who led the research.

“This is one of the holy grails: how to crystallize complex molecules, and to determine their chirality,” Yaghi said.

Seungkyu Lee and Eugene A. Kapustin, Berkeley Lab researchers and UC Berkeley graduate students who participated in the latest work, said hard-to-study proteins, such as those important for drug development, are high-priority targets for the new technique.

“We are aiming for those molecules that have never been crystallized before,” Kapustin said. “That’s our next step. So we cannot only show the arrangement of atoms, but also the handedness of molecules, in which pharmaceutical companies are interested.”

Some molecules are difficult to form into crystals, though, and the process of crystallizing a single molecule can in some cases involve years of effort and expense.

“To crystallize a molecule typically involves a trial-and-error method,” Yaghi said. “Every chemist and biologist has to submit to this process. But in this MOF material you don’t need all that -- it traps the molecule and orders it. It’s a way to bypass that trial-and-error approach to crystallography.”

Importantly, the MOFs in the latest study did not appear to distort the natural, intact structure of the molecules. Researchers say it’s possible to determine the complete 3-D structure of a molecule even if the samples only fill about 30 percent of a MOF’s pores.

Researchers determined the atomic structure of the MOFs and the bound molecules with X-rays at Berkeley Lab’s Advanced Light Source (ALS), and they also studied the MOFs using a technique called nuclear magnetic resonance (NMR) at Berkeley Lab’s Molecular Foundry.

In all, the researchers studied 16 different molecules bound inside the MOF pores, including a plant hormone called jasmonic acid whose chiral structure had never been directly determined before, other plant hormone known as gibberellins, methanol, and other acids and alcohols.

The metals in the MOF framework itself can actually serve to enhance the quality of the X-ray images, Kapustin said, adding that in one case the technique allowed researchers to distinguish between two nearly identical plant hormones based on the difference in a single atomic bond.

Researchers could see structural details down to hundredths of a nanometer -- less than the diameter of some atoms. “You can see with such precision whether it is a double bond or a single bond, or if this is a carbon atom or some other atom,” Lee said. “Once you bind a molecule in the MOF, you can learn the absolute structure very precisely since the chirality of the MOF serves as a reference during the structure refinement.”

This work was supported by BASF SE in Germany and the King Abdulaziz City for Science and Technology Center of Excellence for Nanomaterials and Clean Energy Applications.

The Advanced Light Source and Molecular Foundry are both DOE Office of Science User Facilities. 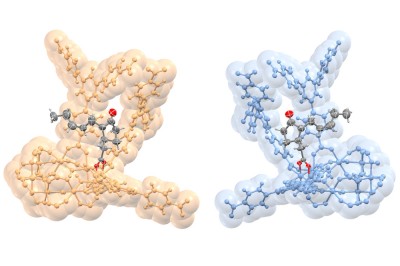 Caption: Mirror, mirror: This rendering shows opposite configurations in the molecular structure of a plant hormone called jasmonic acid (gray and red) that are bound to nanostructures (gold and blue) called MOFs, or metal-organic frameworks. 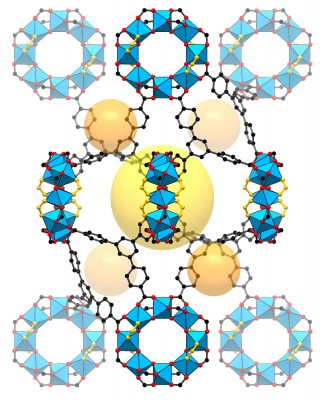 Caption: This illustration shows the structure of a nanostructure known as a metal-organic framework or MOF. The structure possesses a handedness (like a right-handed vs. left-handed person), known as “chirality,” that enables researchers to identify the same kind of handedness in molecules that bind within it. 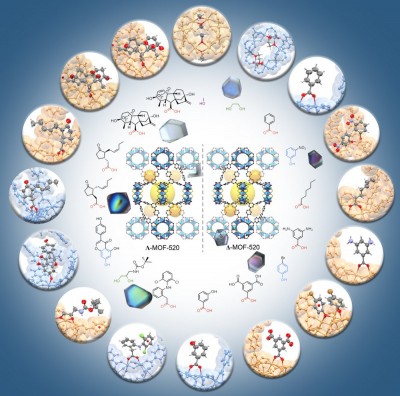 Caption: This illustration shows the structure of 16 molecules that were studied while bound to metal-organic frameworks (MOFs) that exhibit handedness. The frameworks stabilized the molecules for study with X-rays.